You may recall the chisels I made for lathe-working. The long carbide scraper implies bowl-turning is on my agenda, so you’re possibly wondering “where are the bowls?”

I learned to use a wood lathe back in the 70s, and managed to not hurt myself. There was one incident which became famous, though: I had the brilliant idea of turning a large candle in the lathe. That was fun! Streamers of liquified wax (I assume it liquified under pressure) shooting around the room and solidifying like silly string. Until the pressure from the tailstock made the whole thing crumble lengthwise and the air was suddenly full of wax chips as the ends of the candle bounced around the room, spinning at 1600rpm. Everyone was fine but the dog was annoyed by the sudden appearance of lots of crap in his fur, and the whole thing took me hours to clean up.

I made this while I was testing the carbide bar: 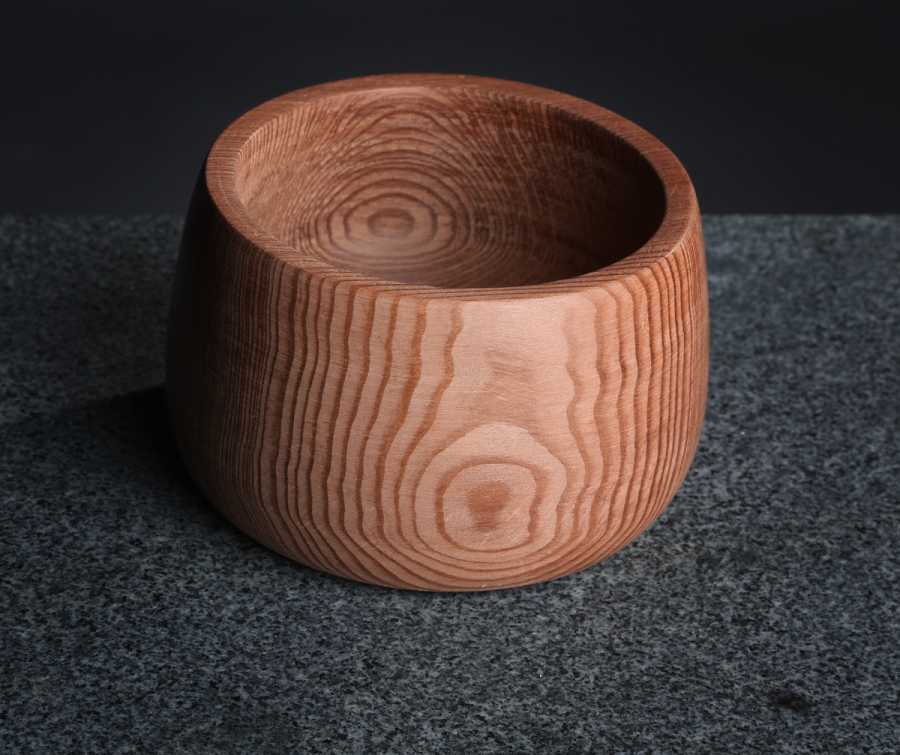 It’s a hunk of vintage redwood, and it’s got all these lovely butter-colored gold glints in it. Unfortunately, several things happened. First, I got oily fingerprints on it, which meant that I had to give the whole thing an oil finish, which darkened it and dulled it considerably. Second, I decided to finish the bottom with a sort of hand-friendly curve. That meant chucking the wood from the inside, by wrapping the chuck with electrical tape and carefully cranking it open. At which point, I opened a small crack in the edge. Some crazy glue helped but the glue also marred the surface a bit.

I’m thinking of this little bowl as a Taoist reminder to not fuck with things after they are done. By trying to improve it beyond what would have been reasonable, I wound up nearly destroying it – and definitely did not improve it at all. It’s a reminder that, in art, sometimes knowing when done is done is the hardest part of making something.

The current state of the art for woodworking lathes is vastly improved over what I learned on in the 70s. Today, most people use a Nova wood chuck or something similar. The Novas are basically a scaled-down metal lathe’s chuck, with a curved lip that you can use to grip wood with tremendous certainty. It’s not out of the question to take a piece off the lathe, take it home, let it sit on your counter, and decide “this needs to be thinner” and take it right back, where it re-mounts with exactly the same balance. Also, nowadays there are ball-bearing active centers (the pointy thing on the tailstock that holds the wood in position from the other side) and people use Forstner bits in chucks in the tailstock to hog wood out of the middle of a platter or whatever. You can even mount a chuck on an active center and use two chucks (one free-spinning on ball bearings, the other driven by the lathe motor) to turn things like handles, where you want a precise grip on both ends. That’s possibly all a lot of argle-bargle; if you’re interested I can post some pictures of what all this stuff looks like in action.

Product photography notes: This was shot on a granite surface plate. The granite texture is the perfect thing to have in the shadowed side of the bowl; you can see it’s there but it doesn’t detract from the wood at all. Lighting something like this is fairly simple: you just wheel a big softbox over and shoot the picture at a slight off-angle from the main light. Since the wood was still un-oiled there are no reflections to worry about. If you look at the left/rear of the bowl you can see a telltale that there’s another light in the scene. I had a small soft light aimed at the back of the bowl to make it stand off the granite; it’s subtle but it makes a difference.