When the politics swirls and the lies are falling thick and deep, I hide in my make-work projects and wait for things to blow over.

That’s not satisfying, because things always have a capacity to frustrate and annoy. This thing, or that thing does not work right and suddenly you’ve hit a speed-bump that has to be navigated and the weight of everything begins to crash over you.

Yesterday, I heard heavy engines back in the strippings and jumped in my truck to investigate. It was my neighbor with his big loader, collecting shale. I’ve given him permission to do that, and we stopped and chatted for a bit (from a safe distance) – I’d forgotten how he’s one of those people who believes everything that comes out of Donald Trump’s mouth. It was so depressing to see millions of years of evolution, spent developing a brain, only to waste the whole thing at the last minute. That left a big damper on my day – I mean, seriously, why bother? He believes the coal jobs are coming back any day now. Why bother understanding anything at all?

To deal with these things, I lose myself in my projects. Those take on a life of their own, naturally, so that means I’m distracted by being endlessly behind schedule. Basically, I have set up a situation that is designed to make me stressed and frustrated. 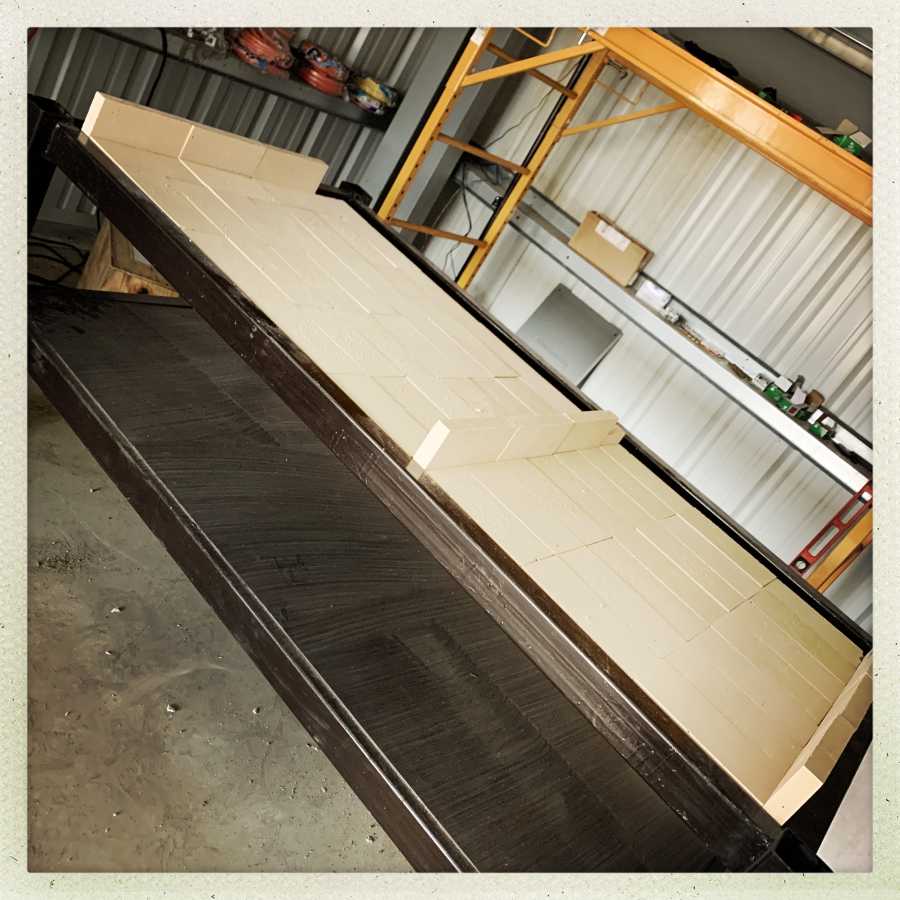 My original plan for the top of the table was to cast a bunch of concrete into it and then it’d be solid, heavy, and fire resistant. But instead I started looking at the sheets of cement board they had at the hardware store, and thought maybe a couple of layers of cement board and some firebrick would be better. That’s how I wound up buying out the local tractor supply store’s firebrick stock. They probably are scratching their heads thinking “hoarders are getting weird…”

Then, after promising myself I was going to take it easy, I did a test-lift on my tempering oven and discovered it was only about 80lbs or so, which meant I could put it in the back of the truck on my own, and unload it into its final resting place. After that, I unboxed the forge – my old chili forge is starting to melt in spots and it’s definitely going to need to be replaced or have a lot of welding and re-lining done. Time for a forge-swap! 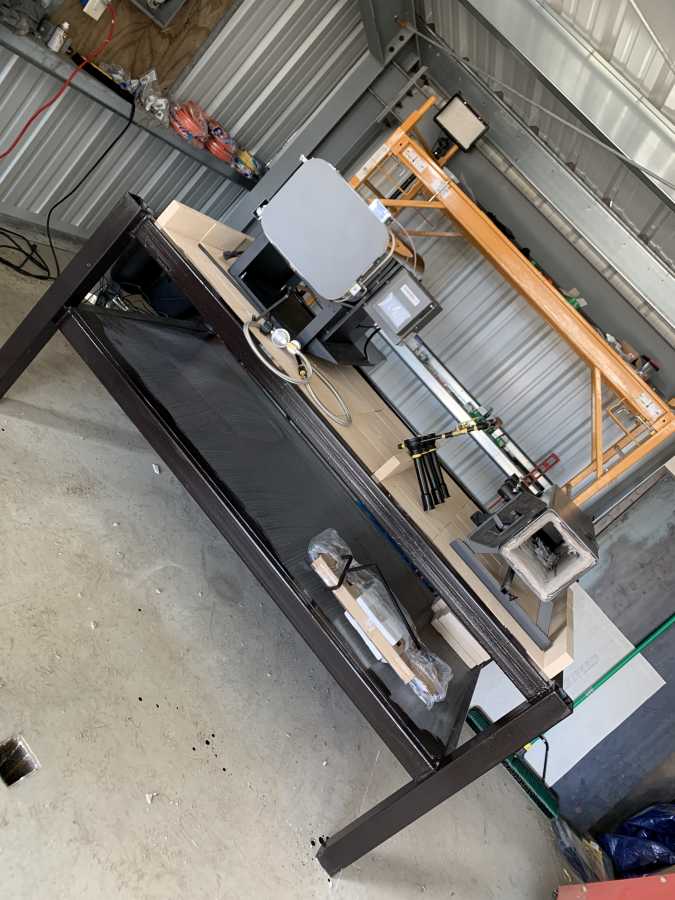 Nice air space between them will allow the heat to go up; things look good. 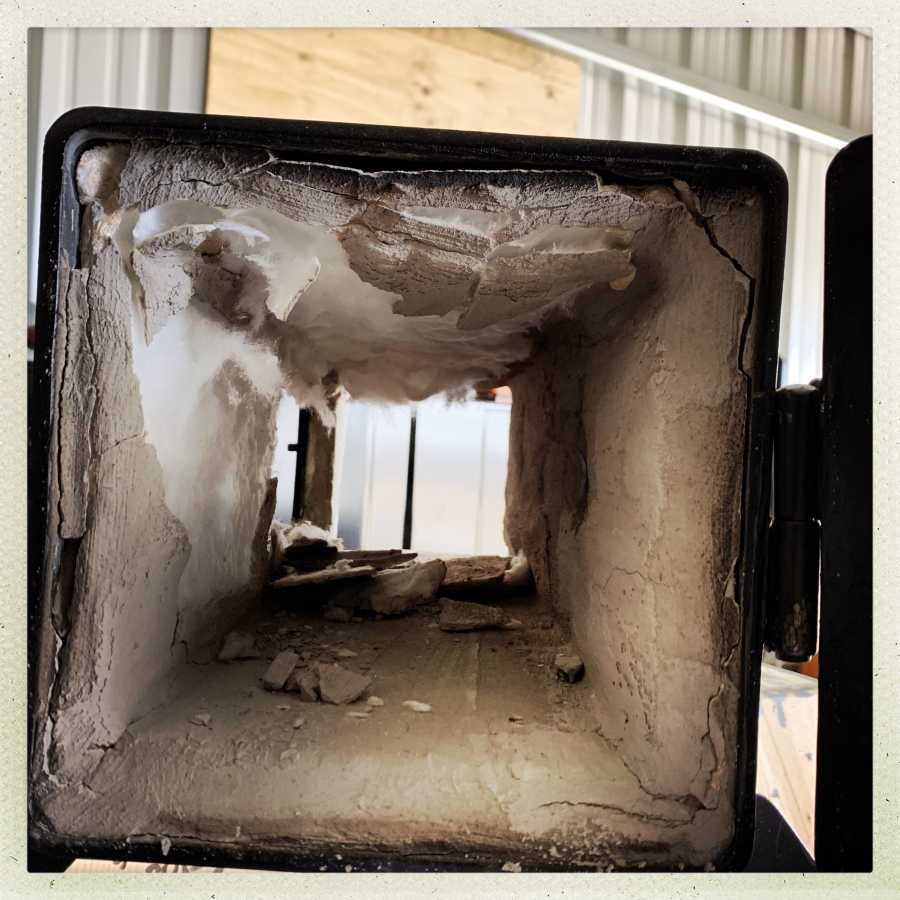 The basic liner of a forge is usually kaowool (ceramic wool, which breaks up and is kind of like asbestos) coated with refractory cement. In this case, the shipping box must have taken some shock in transit, and the liner is pulverized. That means I’ll bring the old chili forge over and use it while I obtain all the various refractories and figure out how to re-coat this thing. This will be No Damn Fun At All. It’s very demoralizing, really. Normally a forge would look like that after a year or two of hard use, but not when you take it out of the box. I guess it’s one more thing for me to research and learn how to do.

Two steps forward, one step back!

It was a lovely day, though, so I assembled some of the “some assembly required” cabinets and mounted them on the utility surfaces I built onto the wall. The extra wood will come in handy since I can do things like screw light switch-boxes to the plywood. There are lots of things you want to be able to attach to something and the utility surfaces are going to wind up carrying a lot of items. I’ll probably put various tool-holders on them, once I figure out what tools I need frequently. 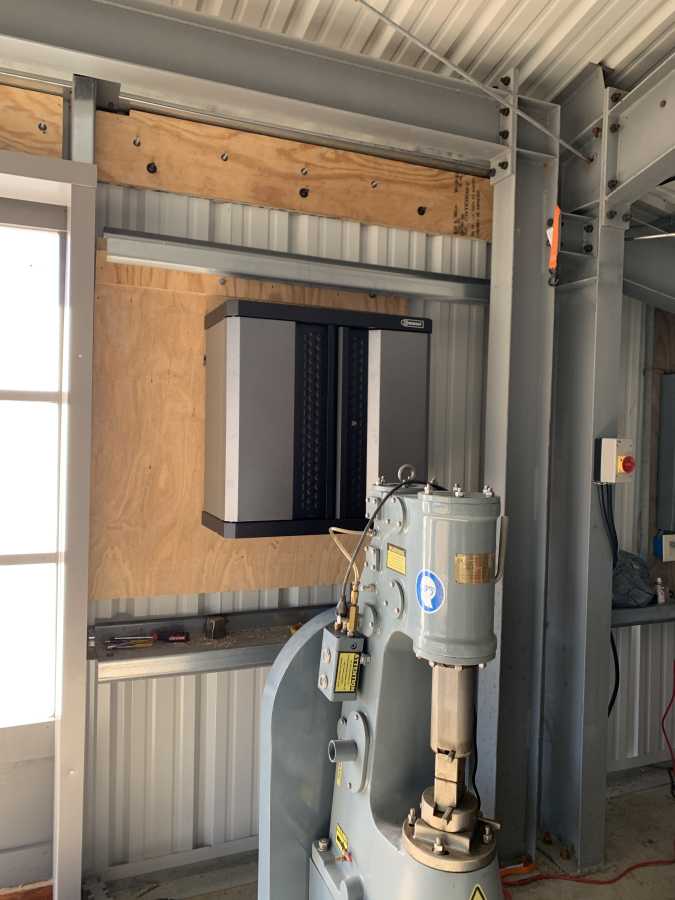 Now I can start getting some of the stuff into the shop and off the floor.

Sometime this week I am going to try to bolt the Anyang down. That’s complicated by having to remove the foot pedals and skirts so I can get the hammer drill at the correct angle. One thing at a time. Days flow to the next. If I get hung up on one piece I can just move around it and work on that later.