I’ve been sweating getting the doors for the shop done, which has been an emotional nightmare for me (strong sense of failure) as I watch my self-imposed deadline for getting the shop online recede into the distance.

Every day I drive past the opening and imagine the wind ripping through the building, uninterrupted. But, I am making progress. That’s what happens when you bite off more than you can chew: you just take smaller bites and keep chewing.

My first plan was to use PVC board, so I would not have to paint or prime or worry about UV. The first attempt was wobbly as spaghetti and clearly was going to come apart in the first blow. So, I asked my friend Mike for help, and he came up and we spent a day designing and building a frame out of laid-up 2x4s. It was heavy and solid, but when I assembled it with the fiberglass sheet in it, the fiberglass could pop out under pressure; I realized that I needed the screws holding the frame together to go through the fiberglass and use the fiberglass to stiffen the frame while holding the fiberglass in place. So, I sat down and did more cursing and swearing and came up with Plan C.

Plan C is based on the realization that, in laying up the frame of 2x4s, Mike and I were reinventing plywood. Why not use layers of plywood and position them so that they flattened out against each other and kept each other straight? 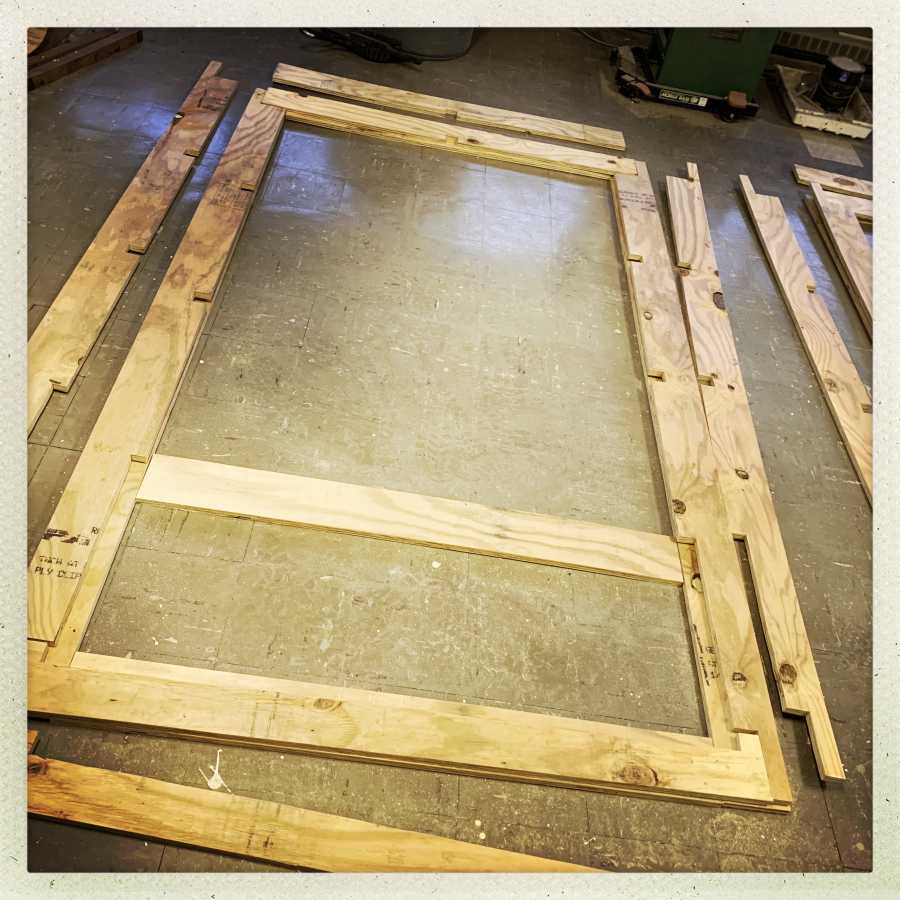 It helps to have a lot of space, too. So, what I did was design the pieces to interlock and hold the fiberglass in the middle. At the bottom, there are cutbacks in the edges and sides to allow a big piece of plywood to fit, which will stiffen and weight the bottom. The side-rails will wind up being massive: 4 layers of 3/4″ plywood, hanging from the rail pulleys.

Since the two doors are the same, and the layers are symmetric, I need to make 4 pieces of everything. All the measures are done right on the wood, which is stacked and all 4 pieces cut at once with my hand reciprocating saw, mitre saw, or table-saw. It’s pretty straightforward once there’s a design, though. 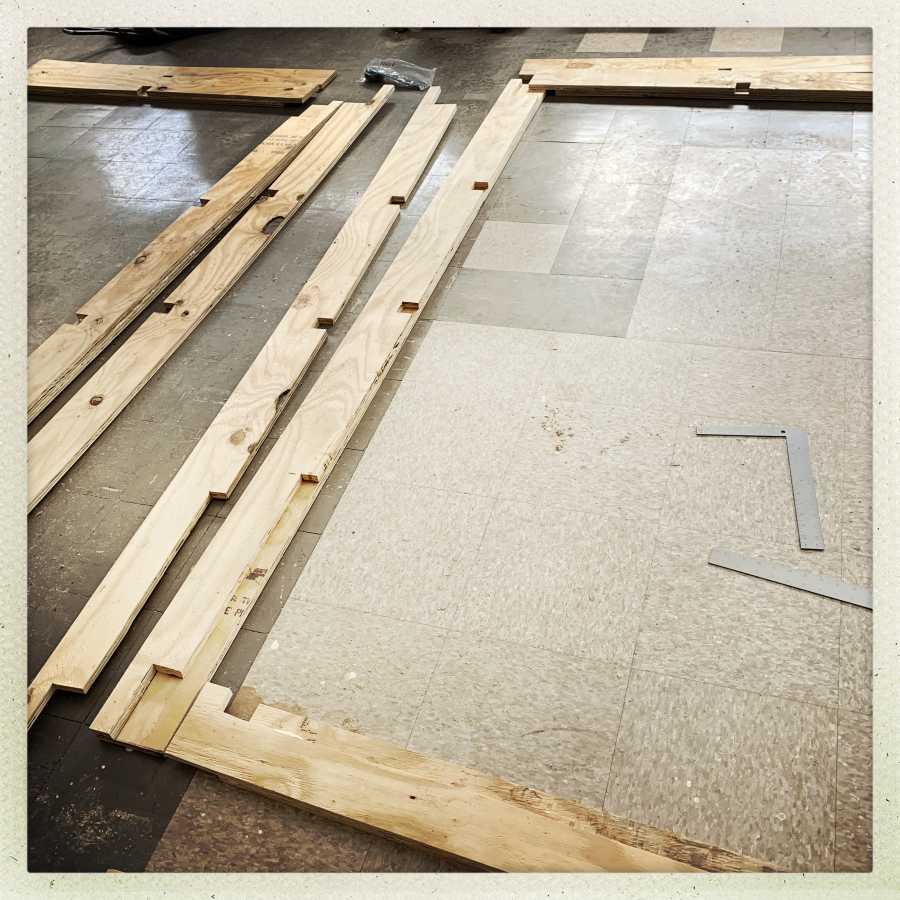 I have to be honest: I am not great at measuring things. So I designed and built these using a method of “experiential design” i.e.: I test-fit a sample of one of the pieces, then (and only then) make the other 3. If I were more self-confident, I’d do it as one series of cuts, but instead I made a model, made sure it all fit together, then made the other pieces.

Back in the 00’s I drove a great big suburban with high tires and a roof rack, which had a rear area that could absorb an entire sheet of plywood without difficulty. While my Tahoe is probably considered “huge” by some of you, it’s not big enough for sheets of plywood, so I’ve gotten to know the Fine Young Folks at the Lowe’s in Clearfield – they advertise that they’re willing to cut plywood sheets you’re buying, so I accepted that offer and loaded the back of the truck with 4 sheets cut in half lengthwise and 2 sheets cut in half widthwise. I’m really unhappy about being 58: I can no longer sling around a sheet of 3/4 plywood like it’s paper – I grunt and struggle and it’s embarrassing when some 20-year-old asks me “do you need a hand sir?” Well, I can sling around a half a sheet of plywood. Time crushes all egos. 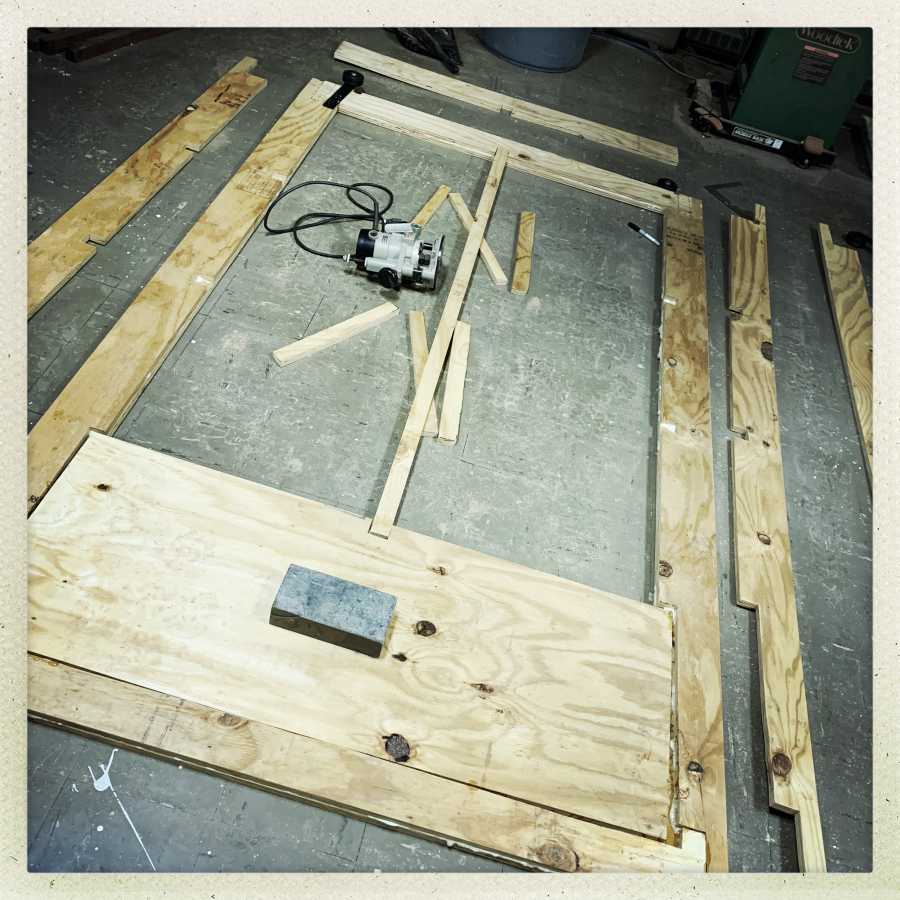 You can see the cuts in the sides for the cross-pieces (more 3/4 plywood!) and the way the kick-piece fits in the base. I made the opening a bit loose but, so what? None of that is visible and the whole frame is locked together with screws, their heads hidden by the layers that go atop. I had to make a mental map of where the screws are so I don’t put a screw down on top of a lower layer screw. 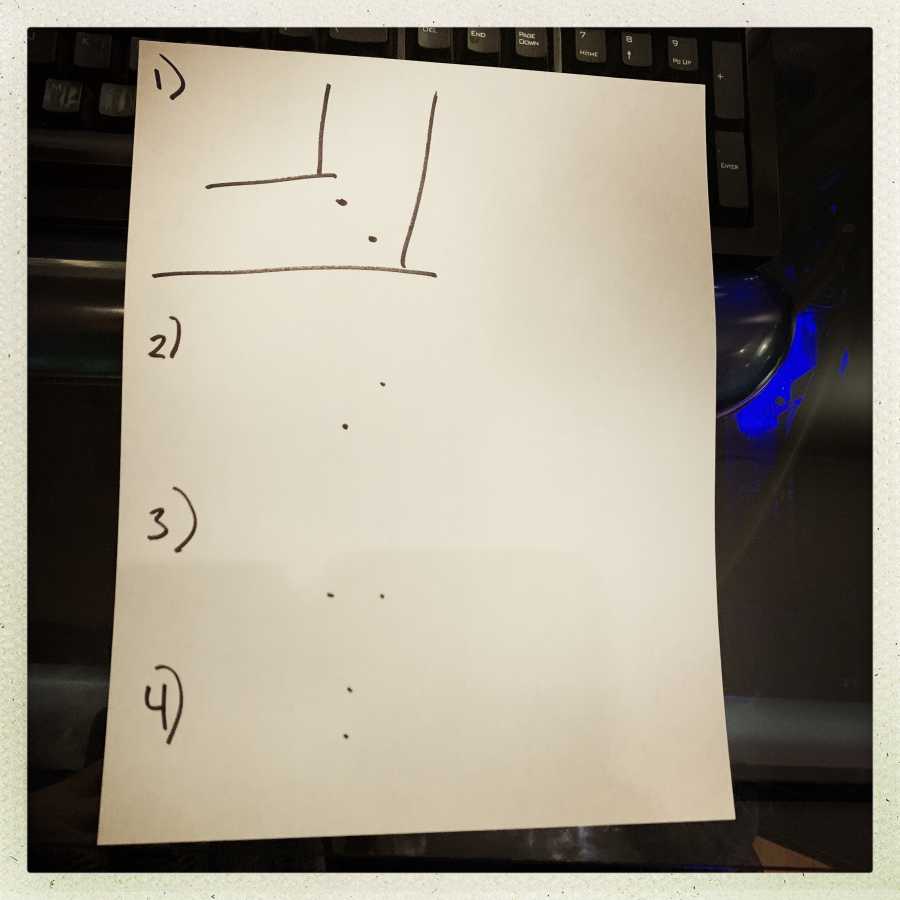 Because each layer will be hidden by the layer over it, it doesn’t matter if I put a screw in a place to hold it while glue cures; I just have to take them out in the morning. 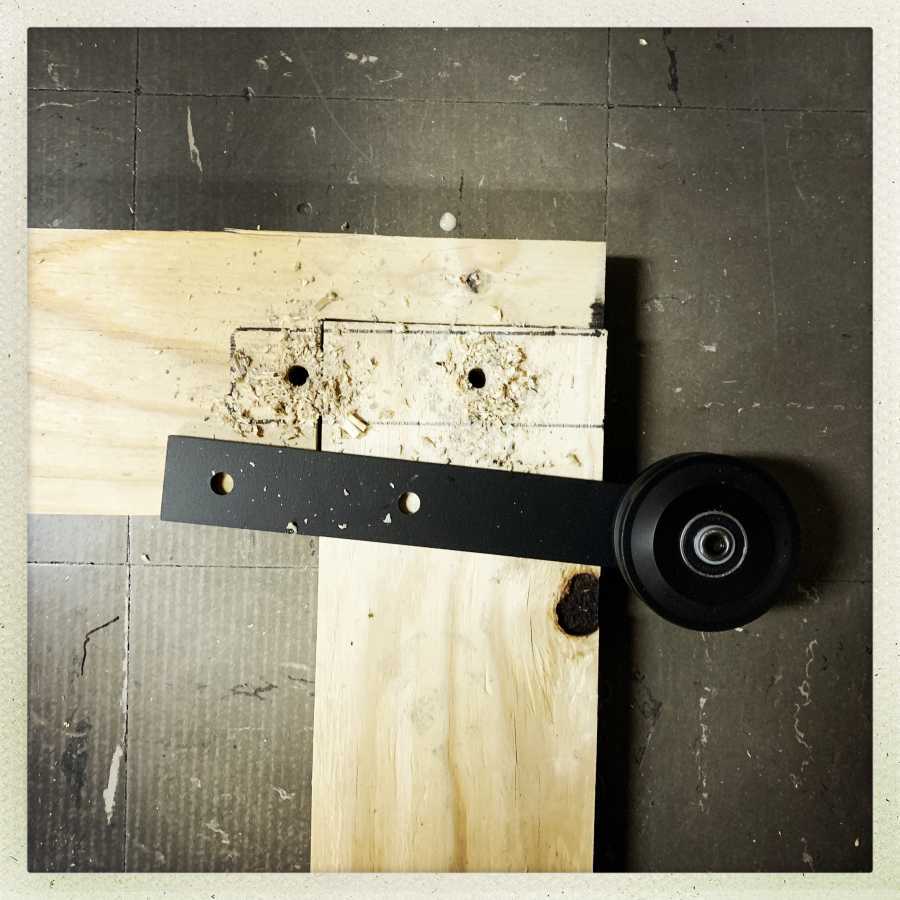 I drilled the holes for one side of the hanger, so that when I put the upper layers on, I can correctly locate where the hole needs to be without measuring: I just drill from the other side. I rather sloppily routed out a pocket for the hanger, and, when I did the over-layer, I put plenty of foamy urethane glue in to lock everything nice and tightly. 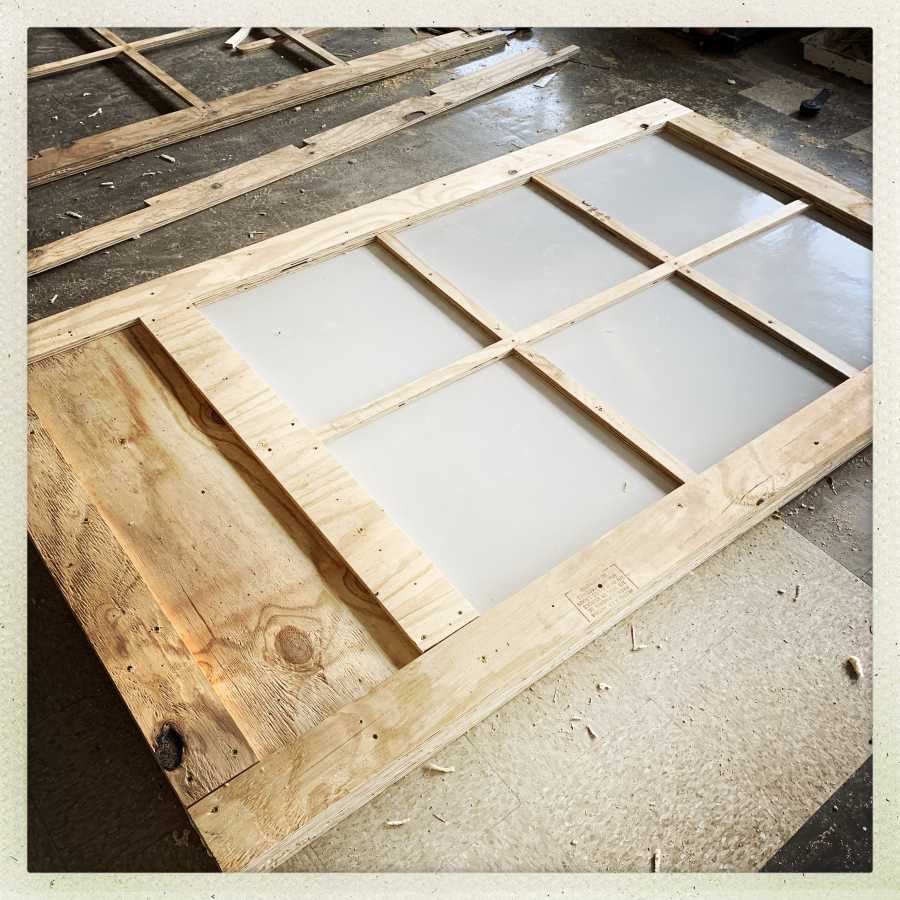 Once that was done, it was time for some serious grunting and complaining, as I lifted the whole thing up onto jackstands, so I could masking tape off the fiberglass and smear some paint on things. 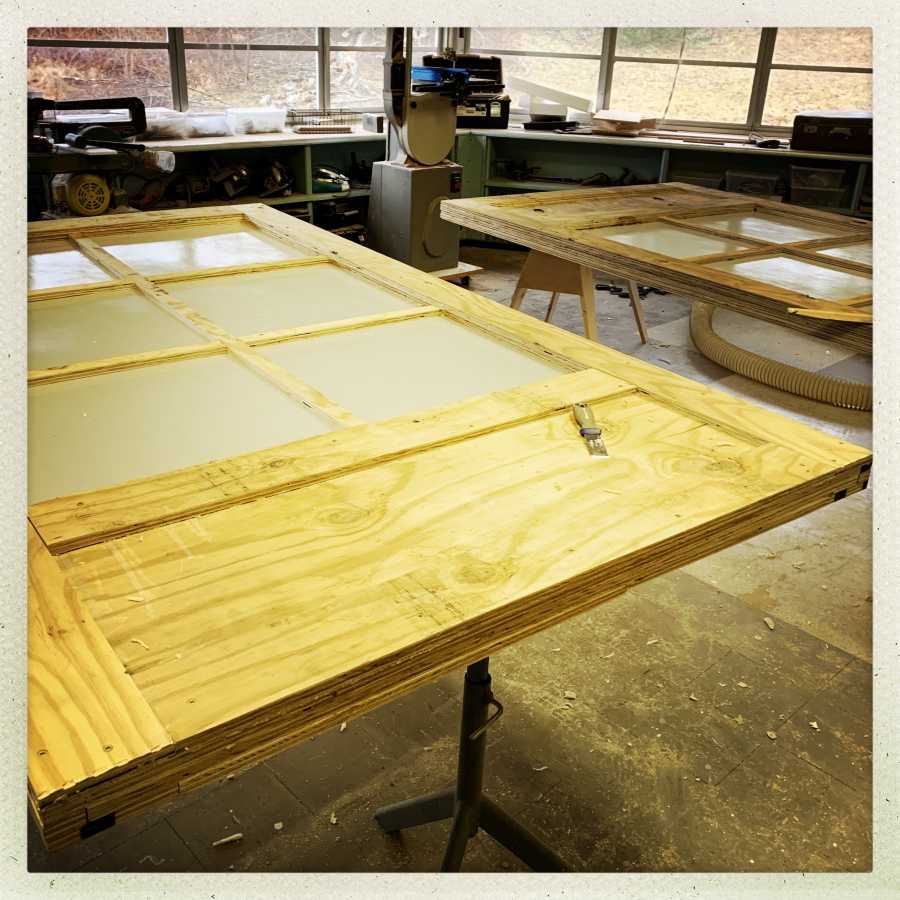 The trick is, you lift one side and put the jack under it, then go around to the other, put a putty knife under the edge so you can pry it up enough to get a finger under it, then curse your mild arthritis and lift the damn thing anyway.

Paint covers a lot of evils, and foaming urethane glue fills a lot of voids. Since this is going to be exposed to the outdoors, I decided which side is “outside” and went around with a caulking gun and filled cracks in the plywood that might collect water, freeze, and pop. 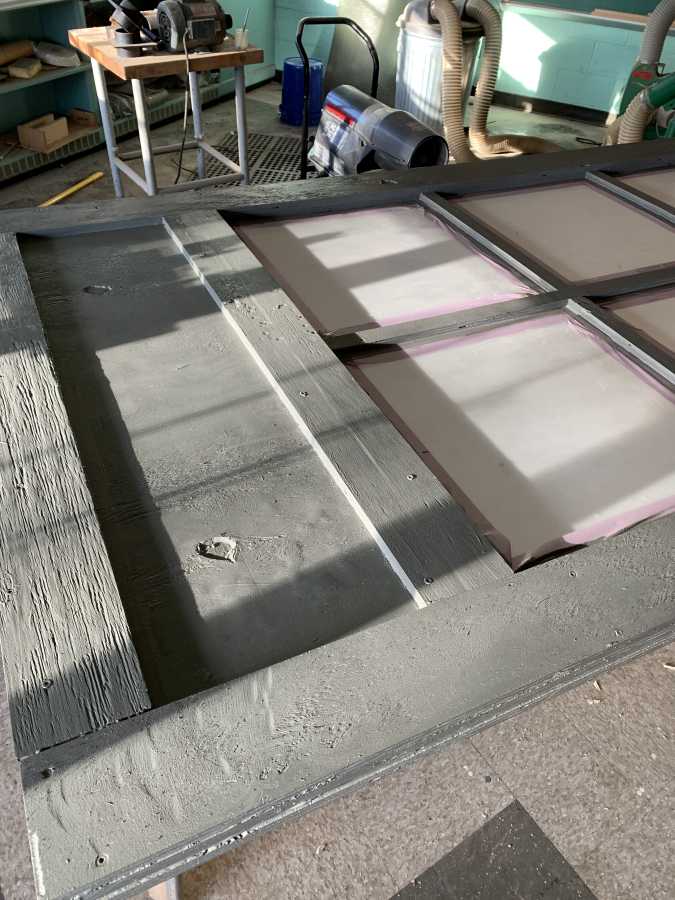 The recommended temperature range for the paint I’m using is 50-75F, and it’s about 40 in the shop. The stuff I am using is cross-linked acrylic, which separates into uncurable goo if you freeze it. (Don’t ask how I know that) So, I keep the can of paint at home in the kitchen, then put it in a cooler full of warm water to keep it happy while I’m using it. I can keep the shop’s air at 75 with the reddi-heater. I run the heat up while I’m working in the other room, then come in and turn it off, lay paint, and close the door to let it cure. I want to minimize the time I am standing in a cloud of diesel exhaust from the heater. But compared to some of the other stuff I breathe it’s not significant.

I hate painting. Holding a small tray of paint in my left hand, and using a roller/brush in the right leaves me with an unusable left elbow the next morning. Oh, well, that’s painting.

Next up is making the mounting rails for the outside of the building. That should be relatively easy: more plywood laid-up into a 17-foot beam 6″ wide, covered with aluminum fascia to keep it weather-proof. I’ll position that and drill through the wall and mount it with stainless steel carriage-bolts to counterpart beams I’ll build that will go inside and hang from the cross-beam that goes over the door. Piece of cake. If I don’t kill myself in the process.