The Kuznetsov sounds like it’s just a shipload of bad luck. The recent fire allegedly did several hundred million dollars in damage – possibly totalling the ship. This makes a total of 3 accidents that have potentially totalled the ship: the dry dock supporting it failed and dropped the ship; a crane fell onto the deck and tore holes in some important things, and now one of the welders repairing the damage from the crane set the ship afire for a while. 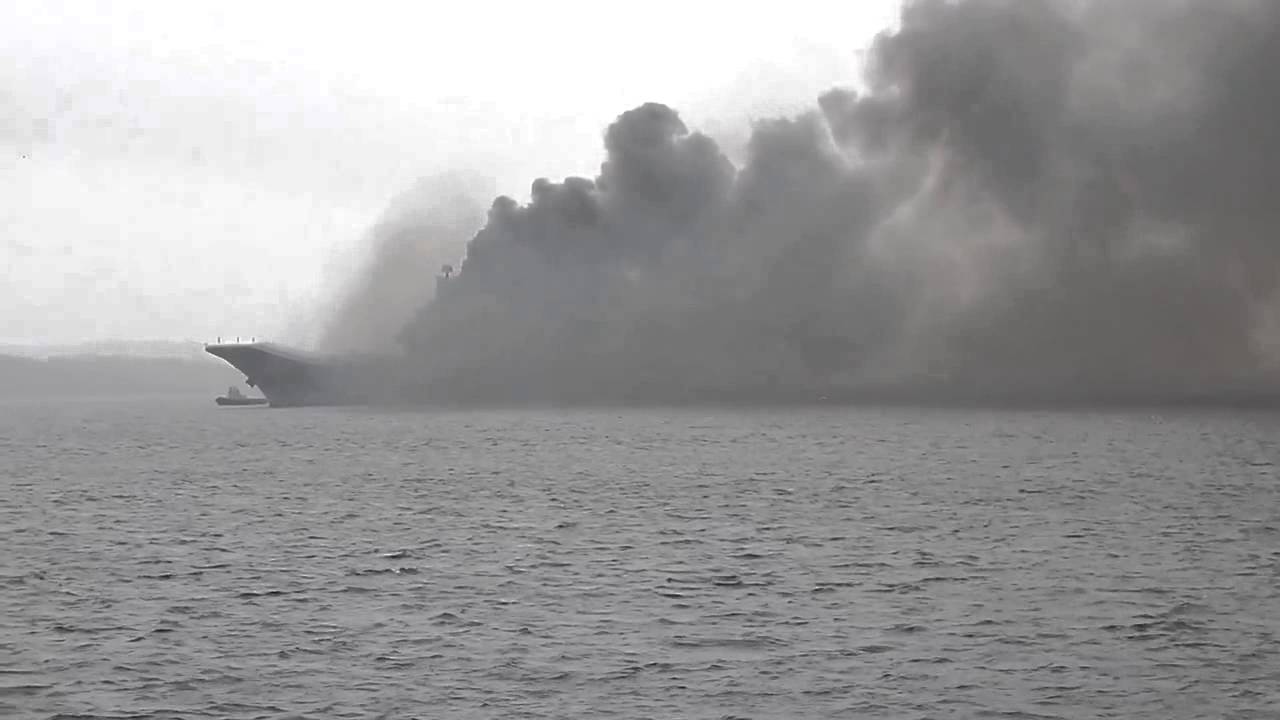 Kuznetsov on fire in Murmansk

The fire apparently compromised a great deal of electrical wiring. That’s going to mean no end of badness for the ship’s future reliability.

Remember: that is the pathetic thing that the US imperial navy’s 13 supercarriers are stacked up against. The Russians only have one aircraft carrier. It has been out of action since late 2017. The picture above may not be from the most recent fire; there was another one in 2009, which killed one crewmember. Apparently that fire was caused by a short circuit; my confidence in the Kuznetsov’s electrical system would be going down, rapidly. This is supposed to be a warship, the whole “catches fire, likes to burn” thing is not one of the attributes of a successful battle-worthy vessel. The US navy, obviously, does not need a fleet of supercarriers just to stand opposite the Kuznetsov – that’s all pentagon bullshit. The US Navy’s carriers are “force projection” – useful for parking opposite countries that don’t have a navy, and adjusting their attitude with a rain of high explosive. It’s the American Way.

Kuznetsov has a sister ship, the NS Vikramaditya. The Russians gave the ship to India, so long as they paid $800 million for “upgrade and refit” and another $1 billion for the aircraft and gear on board. The ship sat decommissioned from 1996 to 2004. The refit was supposed to finish in 2008, but because of scheduling overruns, the ship was not ready until 2012. Cost overruns were $1.2 billion. [Those Russian defense contractors are pikers compared to their American counterparts] It was, however, discovered that an Indian commodore responsible for the project pricing had been thoroughly bribed by the Russians.

The ship has also been plagued with problems: [wik]

On 17 September 2012, malfunctions were detected during trials. According to an official report, seven out of eight steam boilers of the propulsion machinery were out of order. Due to this, the deadline of the hand over this ship to the Indian Navy was postponed again until October 2013. Later investigation has determined that the cause for the engine failure was due to poor workmanship and supervision.

I suspect the ship did not perform as expected, with only 1 of 8 boilers functioning. It’s a miracle that it moved at all. [mb]

At least two people, including a civilian, were killed and another two injured, following leakage of toxic fumes from the sewage plant on June 10 2016. A number of workers were injured or died during ship’s renovation, in Russia.

I’m not sure I can think about what kind of toxic fumes come from a sewage plant, that are able to outright kill people. Derek Lowe once wrote about “hell’s dumpster” (thioacetone) [things I won’t work with] – perhaps that’s what one uses to clean a Russian aircraft carrier’s sewage plant.

There’s no doubt about it: nautical life is dangerous. The sea is unforgiving. So, apparently, are Russian sewage plants.

Carrier flight deck operations are insanely complicated and the margin for error is basically nonexistent. The US Navy has the only effective carrier fleet in the world, because the US fleet is the only one that practices and can actually operate their ships, and train their pilots. Carrier deck landings are notoriously difficult for pilots; there are so many things that can go wrong, and you do not want to try to deploy flight wings and deck crew that are out of practice. Since the Kuznetsov has not been doing flight operations for 4 years, there’s a good chance that they’ve lost a lot of the people that knew what they were doing.