Having a good design in a build project is key; if you’re spending energy, time and money on something that is just going to suck, it’s triply debilitating.

I had an idea for the hot shed’s doors that involved making something vaguely Japanese-inspired, using weather-resistant PVC (“kong”) board and fiberglass. The PVC board has the advantage of not needing paint, and being waterproof. But, as I began to assemble my version, it was clearly too wobbly. I kept hoping that the fiberglass sheet, which was a stressed member of the assembly, would fix that but the result was still wobbly front to back; i.e.: you could stand it upright and bend the corner toward you.

Worse, my design required getting a nice even bead of epoxy around a 4′ by 6′ sheet of flexible, sharp, splintery fiberglass, and simultaneously assembling the frame around it with fast-setting PVC glue on PVC biscuits. It would have been possible with 3 helpers but solo was just out of the question. So, I sat down for a while on the ice cold concrete floor of my shop, and had a good cry.

Then, I called Mike.

Mike has helped me out many times, on projects where I don’t know any more than that I am in over my depth. We’ve been friends for almost 30 years, and we’ve done a lot of projects together. Usually, the skills gap is tilted toward Mike, bigly. Let me explain something: Mike builds seaworthy sea kayaks using wood, sinew, kevlar cloth, and hand tools. That’s his idea of fun. He used the hand tools because I am currently the custodian of Mr Happy Dancing Bandsaw. Mike does woodworking like a machinist. I do metalworking like a woodworker. One other thing about my relationship with Mike that is refreshing: we’ve done stuff together long enough and know eachother well enough that there’s no toxic masculinity bullshit stopping either of us from saying, “no your idea is not going to work.” It’s really comforting when someone is comfortable with you enough to say, “what, that’s not how to do that safely!” I called Mike and he juggled some stuff around on his schedule so he could come out for a couple days and help me.

When Mike and I work on a project it’s very different from working on it myself, because I can bounce my ideas off of someone who knows a lot more than I do. So, I explain things and draw some sketches and he says “Yeah I can see why that didn’t work. If I was doing this, ${this} is how I’d do it.” And, of course it makes perfect sense. It is almost never easier but better means not having to do it over, which is a very special form of easy. Also, my relationship with Mike has enough understanding built into it that there’s never any argument; it’s usually just obvious that he’s right. 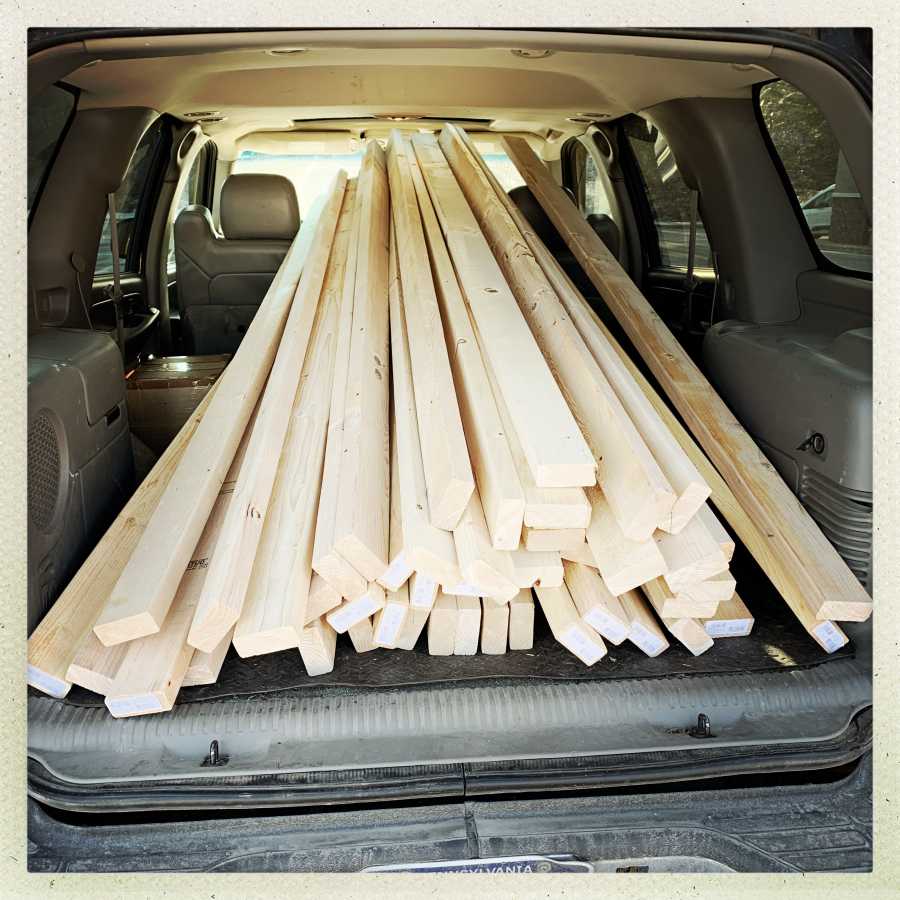 I did not say “holy shit Mike that is a lot of 2x4s” because Mike knows a lot more about this and if he says 50 I buy 50. Besides (as Mike pointed out) I will have 6 more doors to make after this set, and 2x4s will come in handy. Right, as usual.

His idea is to make the side-pieces big and heavy by constructing them of laid-up 2x4s so that they’ll tend to not warp, and they’ll weigh “a lot” and the door won’t move in the wind and besides, a J-rail with roller-hangers likes to have a heavy door so it rides smoothly. His idea is to make the bottom (instead of a panel) out of a wad of laid-up 2x4s. This all makes sense.

He brought his planer, a nice Dewalt portable model, and I admitted I have never used a planer. Mike says “I know.” He’s seen my work. This is great – I am going to get to learn something new!

And old thing that I learned (from Mike) decades ago is that most big projects have a lot of prep-work, and you finish with an exciting flurry where it all comes together and you go have lunch. In this case, since we’re making our own composite beams and they need to be roughly the same dimensions, that means setting the planer up, hooking it to the dust vacuum, setting up jack-stands to hold the stock, and then spending a companionable hour and a half feeding boards through the planer until they’re right. We glued the boards together, first, and screwed them in some places to make the joins tight, then they were ready to plane. 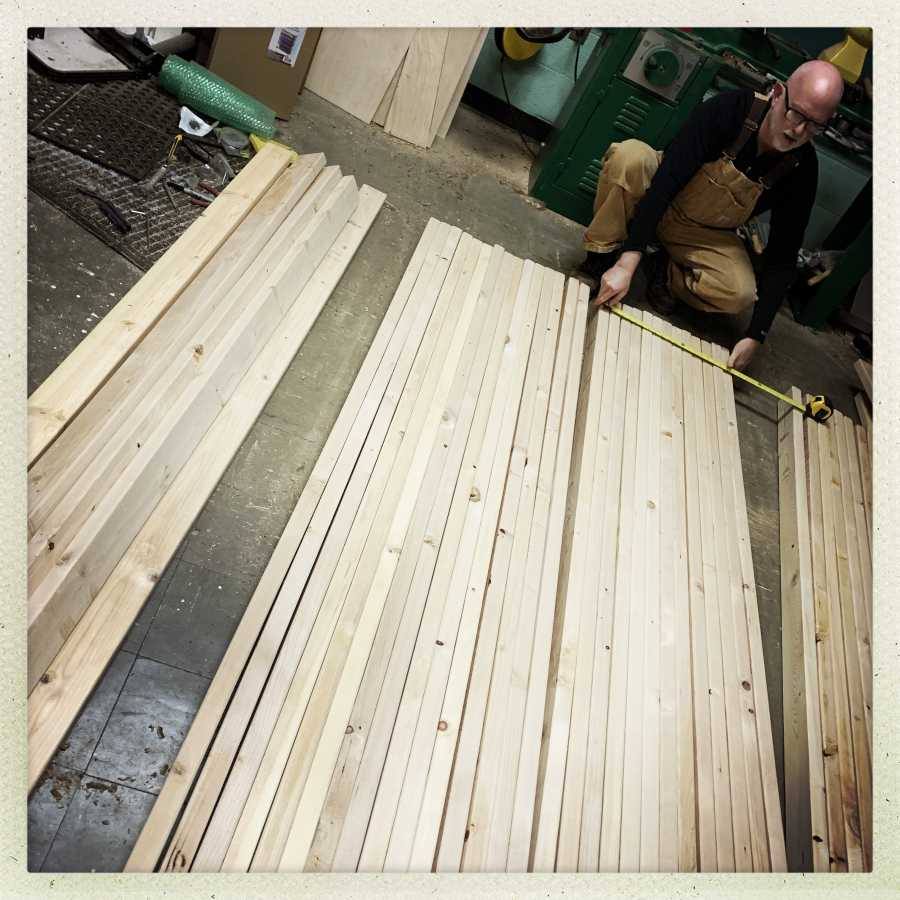 I have to say that the planer’s impressive! It makes things beautifully flat and cuts 2x4s like they are cheese. Lots of measuring, planing, and cutting things on the table-saw later, we lay out the pieces on the floor (which is notably not flat) and then mark the points where we’re going to do the joins. I’ve got a nice biscuit joiner, which is what we’re going to use, and I discover that I’ve been using it semi-wrong (but in a surprisingly creative and effective way) all along. Mike learns something from me, I learn something from him. There’s a problem where one spot does not have enough room for 2 biscuits and I say “oh, I have done that before: you cut the biscuit pockets 1/2″ too close to eachother and then cut 1/2″ off the biscuit using Mr Happy Dancing Bandsaw.” And Mike slaps his forehead, learns something from me, and I learn that the way I had been using the biscuit joiner depended on my having a flat surface and there’s a better way: you deploy this shelf-thing that makes sure everything is in the right place. And I slap my forehead, and start cutting biscuit slots. 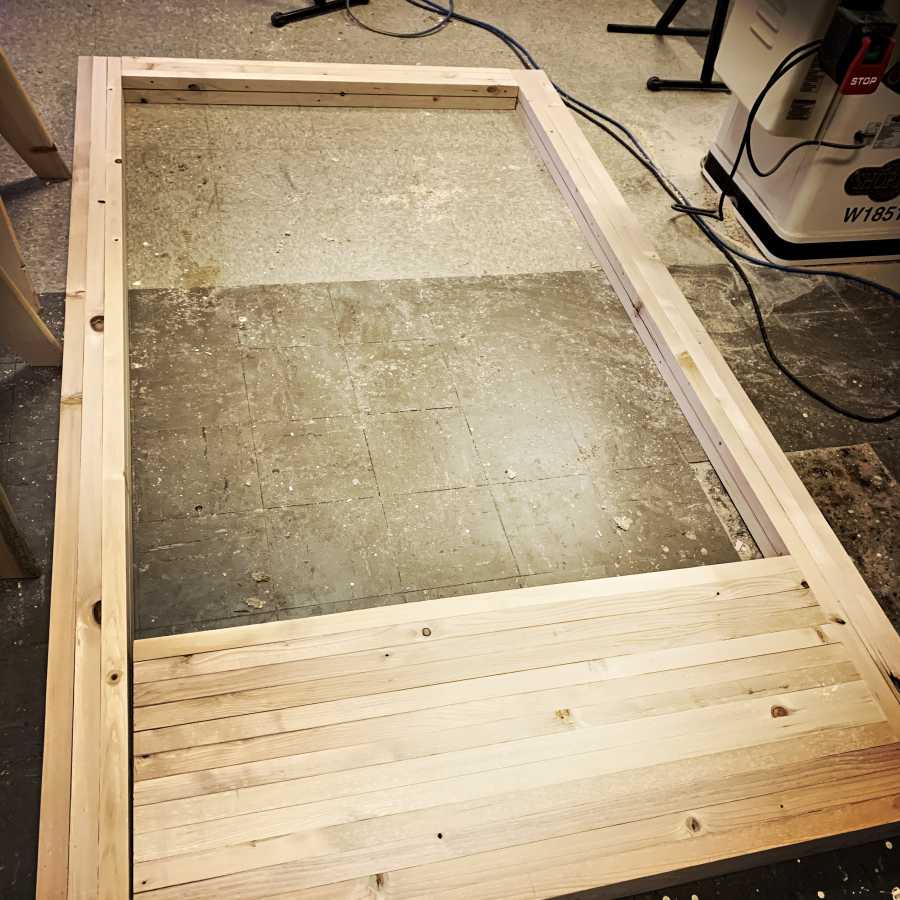 Those were separate 2x4s but now they are great big composite wads of wood and glue, flat and correct. That’s the frame. There’s a groove in it that will accept the fiberglass. The fiberglass does not need to take any stress because the door frame is not very flexy. Not flexy? It weighs about 200lb. I’m still not sure how I will get it to the shed (it’ll probably fit in my Tahoe but I’m not sure how I will get it into the Tahoe).

That’s where it stands. Tomorrow we’ll cut and check-fit the fiberglass and the center pieces, then call it a day and I’ll teach Mike how to make a hammer handle on the lathe. Which will mostly consist of me setting it up and staying out of the way. Mike was looking at my spare collection of hammer heads and I said, “help yourself.” That’s how another project happens.

I have a reddi heater but Mike doesn’t like breathing diesel combustion byproducts. I’m a blacksmith so I just laugh at cancer and hope it never gets to laugh back, because that shit is not funny. The plan then becomes that we’ll get all the parts right and when Mike heads home I’ll paint the frame pieces and do the glue-up; the air and the paint and wood surfaces need to be a bit warm or the paint won’t cure. One of the things I hate more than almost anything else (except hand planing and doing dovetails) is painting. Somehow my projects always seem to involve painting. And I know that this paint will last 5-6 years and I’ll need to paint it again – and it’ll be worse then because I’ll have to not paint the fiberglass. I’ll let Future Marcus deal with that, heh, heh, heh.

We also spent a while over at the hot shed looking at the beams and noodling about how to mount the door rail, and the doors on the open side of the building, and I feel I have a much better handle on how to do that. I’ve got a gantry platform and jack stands so I think I can get the header beam up there and hold it in place long enough to get a screw into it, then 40 more. It’s just going to be hard work.

I actually have more work to do than I thought I did before Mike arrived; I just didn’t understand the situation then as I do now. But my morale is considerably improved except for the bit about the paint.

The next few days are christmasy stuff. Monday I’m heading down to Pittsburgh and Tuesday Anna and I are going to drive down to Baltimore to do christmasy stuff with my parents and sister and her kids. I may get a bit spotty here and there for the week and then I expect to get back to normal and I’ll chronicle the door project as it continues to morph into a death-march.

Happy ${holiday} to you all!