This is an simple, solid, no messing around knife. 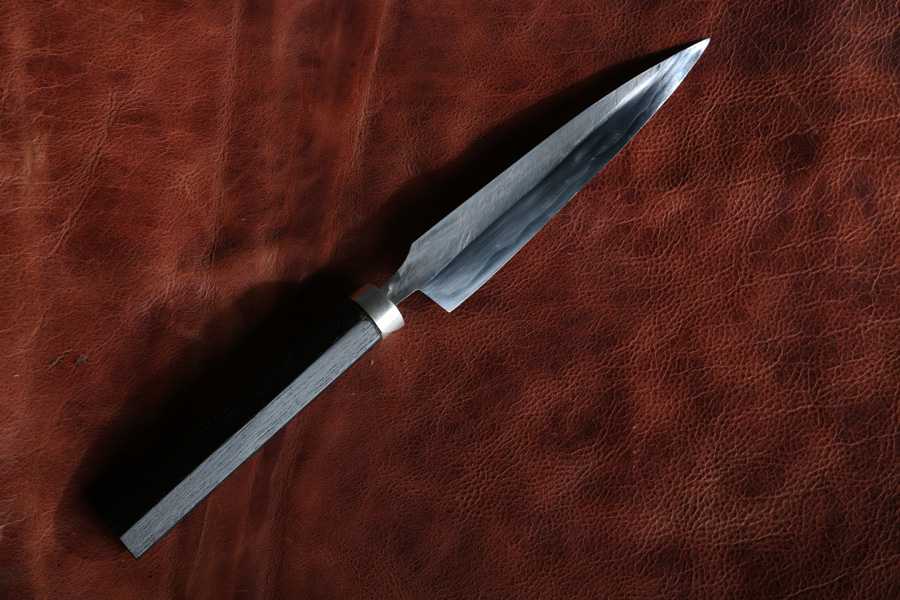 Someone in the comments of one of my other knife postings suggested I try a few grinds in the Japanese cooking knife-style. That’s an interesting challenge because it’s my opinion that the Japanese do cooking knives best – perhaps too well, there are literally dozens of specific blade-shapes adapted to individual purposes, i.e.: an octopus dismantling knife is very different from a tuna-boner, etc. If you start getting into a battle of attrition with a Japanese knife fanatic, it’s a quagmire: “You can’t cut garlic with that! That’s for sea urchins!”

All of that is a roundabout way of saying that my knives in the Japanese tradition do not match the actual Japanese blade patterns because fuck all that. The reason I make my own knives is so that I can make my own knives, although I freely steal the important parts of Japanese blade-shape and steel treatment because their ideas, in general, are the best in the world.

*Right-Handed Only* – this is chisel-ground on one side and it’ll be hard to use cleanly in the left hand. I’ll be posting another auction in a few minutes for a left-handed knife. The other side of the knife (not shown) is coarse-ground with a slight hollow so it won’t stick as much to whatever it’s cutting through.

Instead of a normal bolster, it has a silver wrap-around ferrule that I made by hammering a piece of .99 fine silver around a mandrel and soldering with tin/silver solder. I like how the wrap ferrules look but you might not. 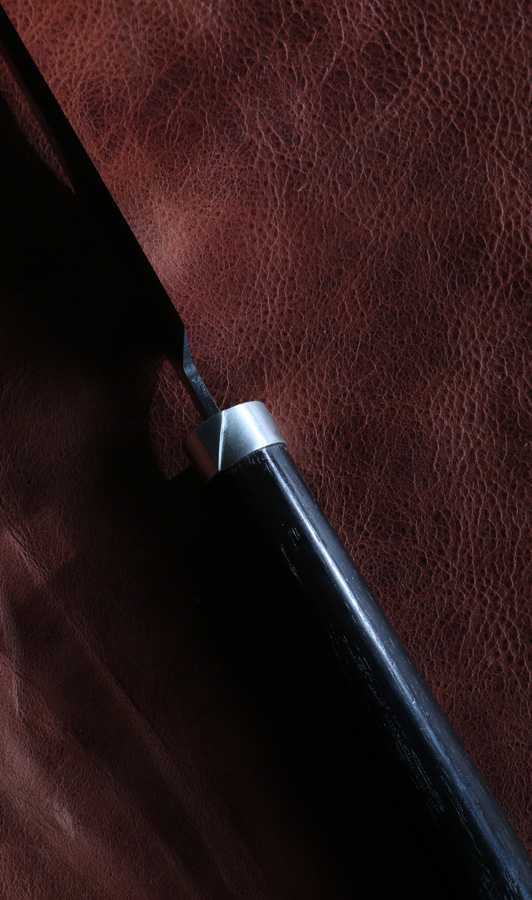 The handle is a single piece of 6,000 year-old bog oak from Ukraine. (Which was obtained on Ebay, with no political pressure involved)

The blade is W-2 tool steel; it’s not fancy damascus, it’s mono-steel but it’s hammer-forged into shape. W-2 is one of the best steels if you want a dramatic hamon, which is what I was experimenting with here, so that’s what I used. The hamon was polished out using polycrystalline diamond dust on a piece of oiled leather; it’s very distinctive and clear (turns out that polycrystalline diamond is just great for fine polishing things!) The hamon (temper-line) is the transition between pearlite steel on the blade’s back and martensitic steel on its edge; this transition is made by differentially quenching the blade with clay insulation on the back so that only the exposed edge hardens. As the blade is polished, the hard martensite reflects light differently from the pearlite, and creates a distinctive line in the steel.

Specs:  Overall length is 14″ (350mm) blade is 8″ (200mm), W-2 tool steel, silver and bog oak. The blade shape is a “yanagiba” overall (leaf-shaped knife, good for making sashimi) but it’s a bit thicker and shorter than a typical Japanese yanagiba, more suitable for chicken or vegetables or beef. (Yanagiba are typically long because sashimi-making requires cutting the entire piece through with a single draw-cut.) Right hand chisel grind.