Sold to Azrael for $151! Thank you for supporting FTB!

If the previous knife was simple and solid, this is a bit flashy. One of my friends who commented on this knife as I was building it started calling it “Serenity” so, Serenity it is.

This is a Left-Handed chef’s knife. If you look at Japanese knife-makers’ catalogs, the left-handed grinds are fairly rare and mostly custom and expensive. Did I ever mention to any of you that I was very dyslexic as a kid and worked hard to grow out of it? Sometimes I still get turned around. When I started grinding this blade I already had the bevel set and was chewing away at it when I noticed that the tang was pointing right instead of left. Oops. It doesn’t bother me, though, it just means that you have a chance to make some left-handed chef happy! 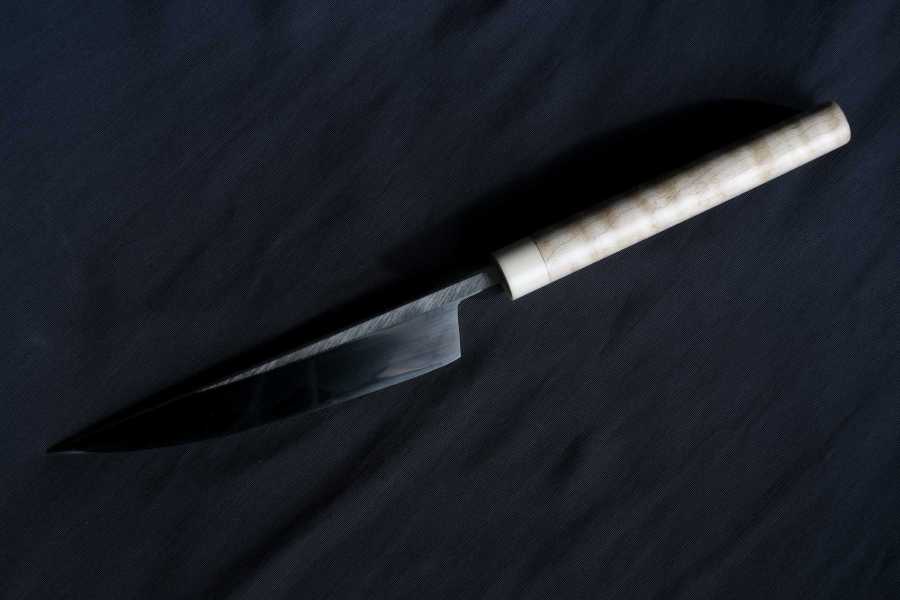 This is a fusion of my “chef’s pwning knife” shape with a Japanese sushi knife aesthetic. It’s strong, light, and it wants to dance in your hand and cut things.

*Left-Handed Only* – this is chisel-ground on one side and it’ll be hard to use cleanly in the right hand. The blade is highly polished (ridiculously polished, really) on the cutting edge and the other surfaces are left coarse-ground. I happen to think it looks very nice that way and any accusations that I did it out of laziness are fake news.

The bolster is state-of-the-art fake ivory. It’s absolutely gorgeous stuff. Some patient person figured out the right mix of colors and layering to get polyurethane resin to have a texture and internal life that looks enough like real ivory that I wouldn’t take this knife near a customs agent. 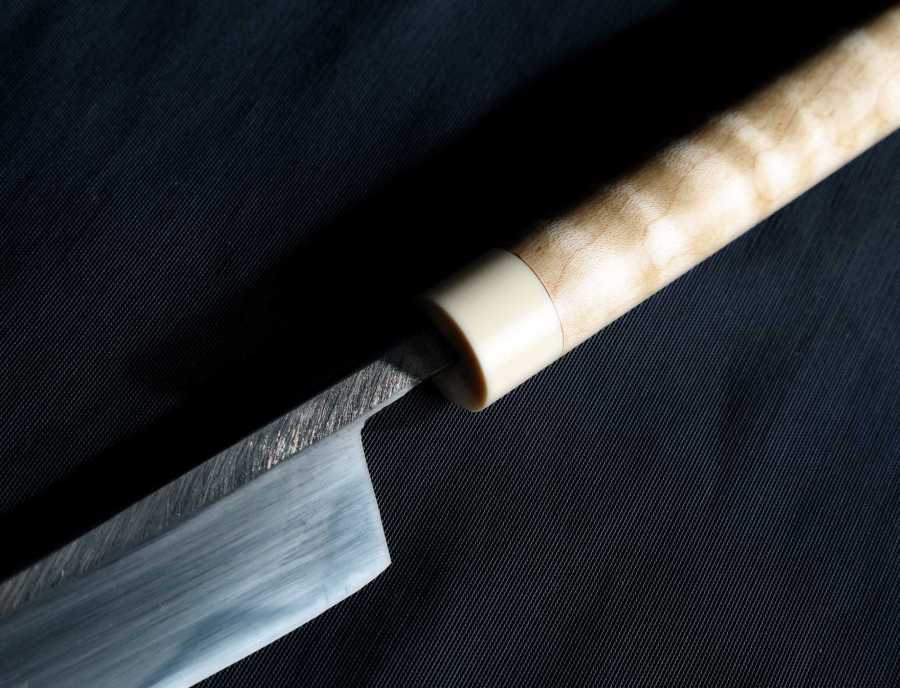 The handle is a very bright white maple with surreal patterning in it. This knife has all kinds of subtlety and sparkle to it which is very hard to photograph. Look at the slight luminousity in the fake ivory; it even transmits light like the real stuff. But no elephants were hurt to make this knife.

The blade is W-2 tool steel; it’s not fancy damascus, it’s mono-steel but it’s hammer-forged into shape. Look at that temper line! The hamon is very crisp and elegant.

This one’s special. I was so happy when I finished it that I took a week off, because I don’t want to compete with myself when I know I’m going to lose. Don’t ask me if I can make another of these – I seriously wonder if I can.

Did I mention that this is Left-Handed Only?