I did this for one of computer security’s early innovators, Dan G., who has been my hero since I first worked with him on porting MIT’s Project Athena code to ULTRIX in 1987. He now lives on a farm in rural someplace and I know he cooks.

So, I went for radical simplicity in all ways. The blade is 1095 wire rope, welded down and flattened in the press, then cut and ground, differentially tempered with clay. It has a nice simple sweeping temper-line like a katana’s, just as I had intended. The handle is a vintage chunk of redwood that I resin soaked under vacuum, with a bolster of redwood burl. I did a wedged D-shape on the handle, which I find feels good and visually resembles a Japanese sushi knife; these are all things I like. 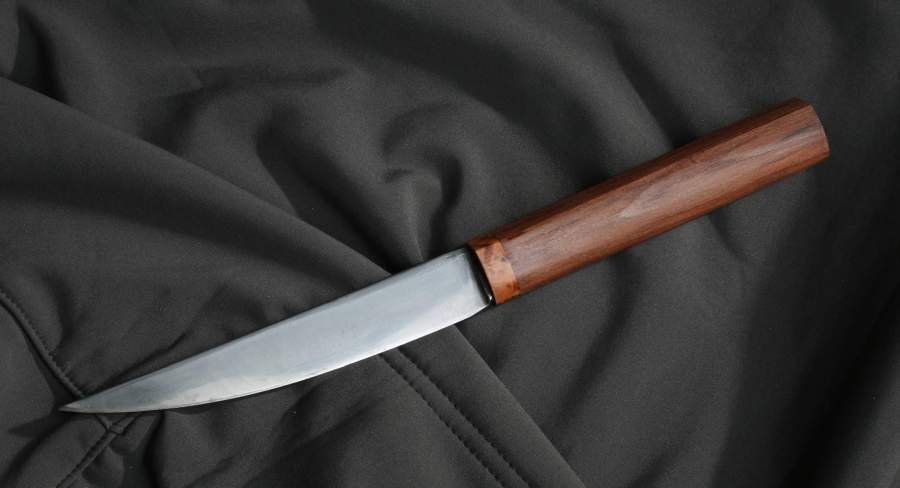 A few minutes after I took this photo, I noticed that the blade was not perfectly straight; there was a slight bend at the tip. That’s not uncommon when you’re working with damascus; the metal has all kinds of stresses pulling it in different ways, and the thermal cycling of grinding and polishing sometimes pulls it a bit off line. So I put two blocks of polypropylene in a vise, inserted the knife at the correct point, and leaned on it just a little bit. This stuff is like a spring, so you have to deflect it a fair bit and check to see whether it’s correct.

Just a tiny sound. The martensitic edge had a micro-crack in it now, leading up to the softer steel of the back. The knife is still perfectly usable but it’s not repairable and it’s certainly in no condition to give to someone as a gift of respect. You can barely see the crack but if you know it’s there you can’t take your eye off it.

I already have another blade ready, that is identical except for the temper-line which is always unique. It’s laser straight.

This one is in Anna’s knife-block as a place-holder until I can get the handle on the blade I made for her. After that, I’ll probably use it. It’s perfectly functional, it’s just a bit cracked. Like me.

On My “Method” » « Waltz of the Wallflowers