This is the status of what I think of as “voyager’s jaw.”

When the silicone was cured, I cut it lengthwise to release the jaw, and did some experimental wax pours. 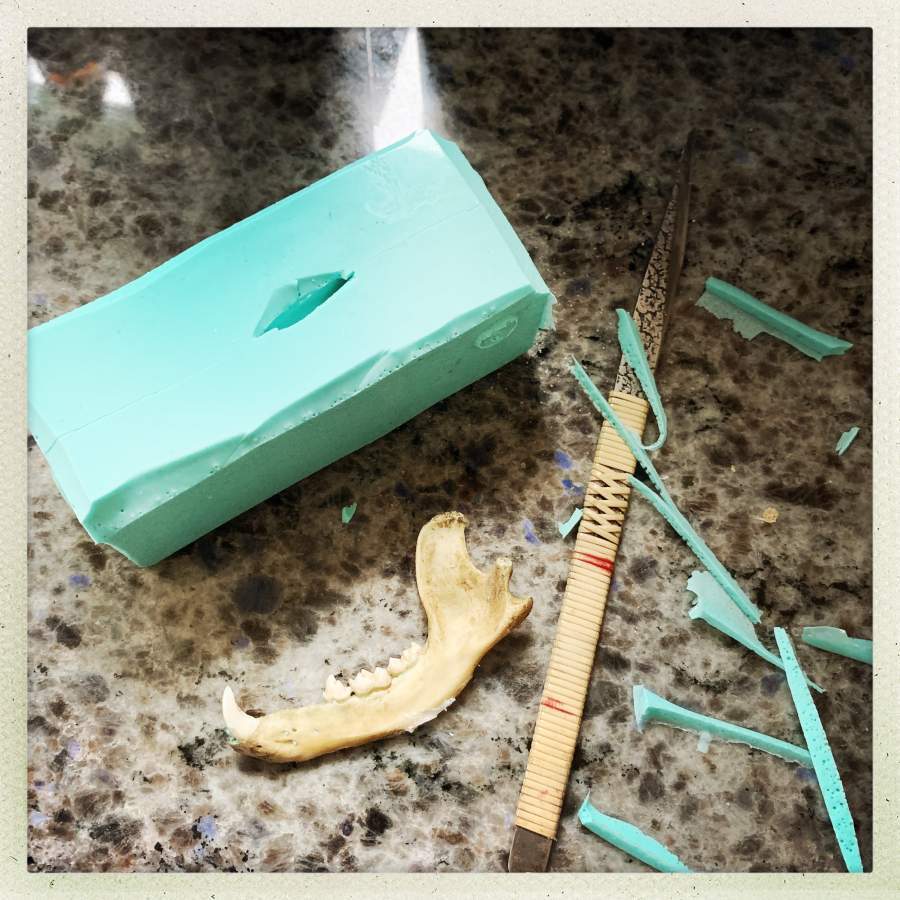 I use a vintage tamahagane kiridashi as my silicone-cutting scalpel – it feels like being a paleontologist digging a fossil out of a rock: you carefully cut and poke and pull the silicone away from the object, teasing at it and slicing it cleanly with the tip. On the bottom of the jaw you can see a bit of polyurethane glue I used to hold the jaw to the counter-top so it wouldn’t float in the silicone. That gives me a minimal cue for where to cut when I remove the object. When I am planning the mold-pour I spend a while looking at the object from all directions, trying to figure out what angle is the best, and where there is a disposable/reconstructable “edge” that I can use for where the opening in the mold will be.

Proper mold-making entails using clay to build a “dam” then pouring half of the mold, flipping it over and removing the clay, then pouring the other half. I’ve done that but it takes 2-3 times more work and time than just doing a single pour and cutting away with a knife. Besides, I can easily recreate the line and texture of the bottom of the jaw on a belt sander. 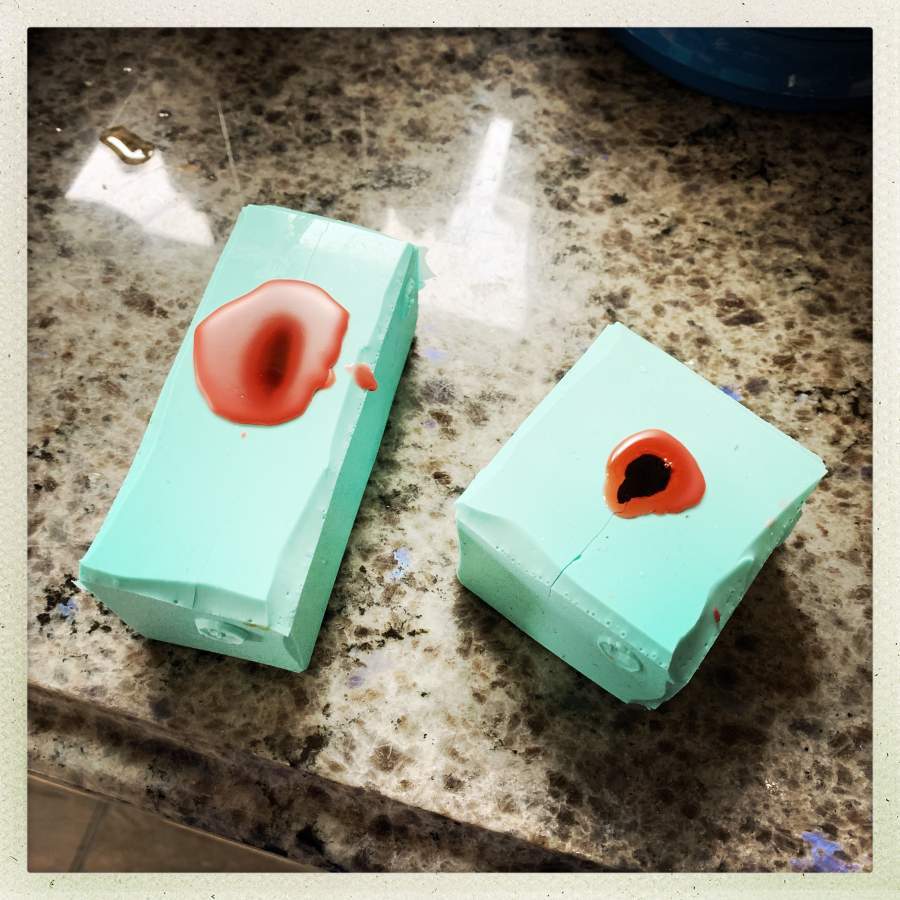 A “real” jeweler would use a pressurized wax pump and vacuum to completely fill the cavities in the silicone but I am stubborn and lazy and surreal, so what I do is thin or thicken the wax’ composition by adding beeswax so it flows better. The beeswax is less durable than official jeweler’s casting wax, but it’s cheap and it’s thinner, so I can manage how well it pours and the melting temperature.

The pour above did not work – the bottom of the fang-tooth wants to capture air and make a bubble, so it refused to come out. Now, here’s a dirty trick you can do if you don’t have a pressurized wax-pump: you pull the mold open and make a small cut down the part of the mold that shapes the fang. Then, you pour the mold full of wax and quickly pull it apart at that spot, so the air gets out, then push the mold back together and top it off with more hot wax. Of course this gets hot wax on your fingers and countertop but, anything for art. You wind up with “flashing” – thin transition areas where the wax bled into the cuts in the mold; they snap right off with a little nudge from your fingertip of a flick from the tip of the kiridashi. 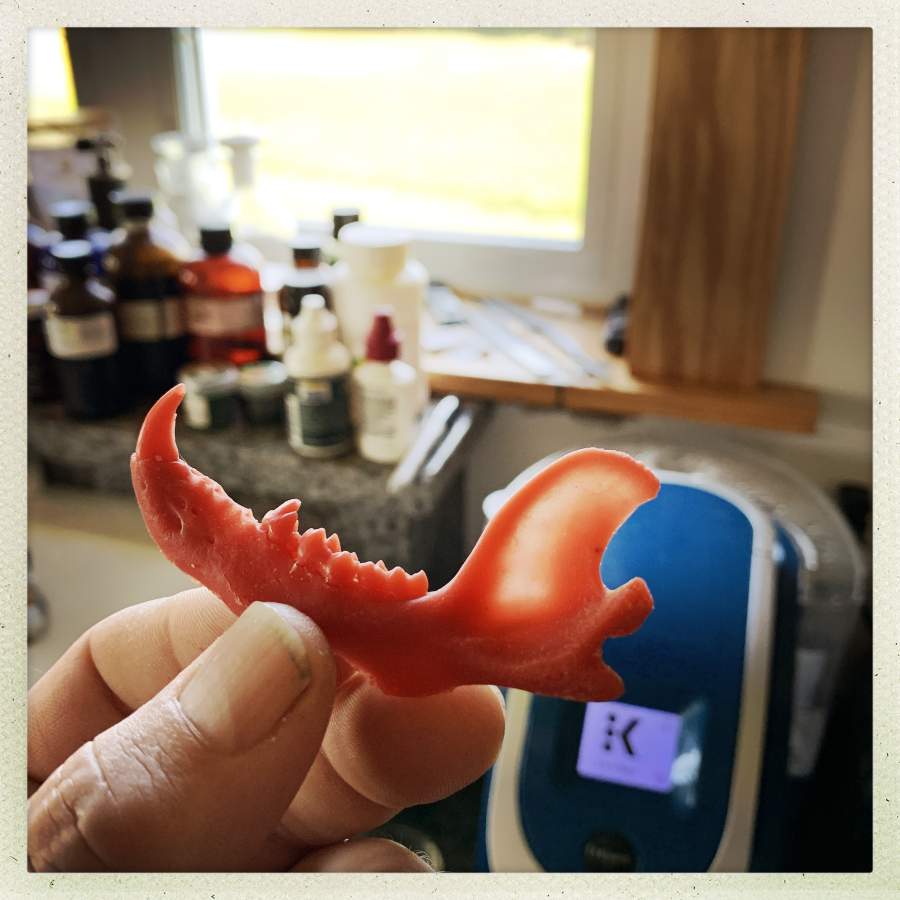 I can see we are far from out of the woods, yet. Look how thin the bone is at the top of the mandible! I have no idea how that is going to cast in metal but my guess is “badly” Unfortunately, it’s going to take a while before I try to cast this because I feel as though the cast should be done under vacuum and I don’t have a frame for the investment handy and I haven’t got the vacuum rig set up yet. That means, probably, this wax is going to sit until December or thereabouts. I may find a frame for it and cast the investment plaster, then just put the whole thing on the shelf until I am ready to melt it out and give it a try.

When we look at pieces that evolved, it’s easy to see how someone might think there was a great designer behind it all. The thicker edge of the mandible strengthens the animal’s jaw in the dimension where it needs strength, and the surface area of the top of the mandible allows the muscles to attach. It looks like an airplane part, designed by a master machinist, except it’s not – it’s just evolution resulting from foxes (or whatever this was) that had jaws that were strong in the right place, and survived to pass on its genes.

The other mold on the countertop is half a walnut. I was wondering how it would come out and whether it would make neat jewelry, so I gave it a shot. It came out OK but I’m not sure what I think, and whether or not it’s worth trying to cast it. 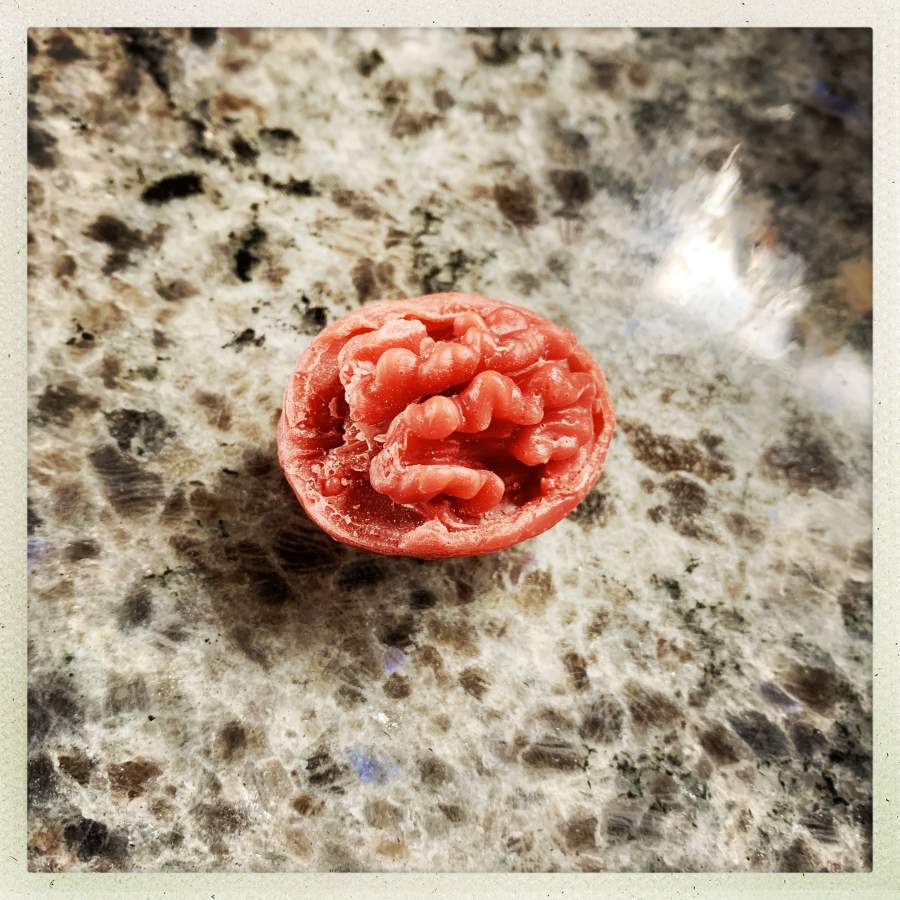 Your Horoscope For The Day » « “Send Her Back”