Just a reminder: messing with another country’s civilian power grid is a crime against humanity.

Not that that’s going to slow the US government down, in the slightest. After all, the US has been warning for years about the danger of Chinese and Russian cyberspies in its power grid, and making dire threats of consequential “real world” military action against any nation so foolish as to contemplate such a thing.

Perhaps now some people will re-assess whether the US had any involvement in Venezuela’s power grid problems. [stderr] Maybe the Venezuelan grid was already tottering on the edge of collapse, and maybe it just needed a nudge. Having to disclaim culpability is one of the many downsides in letting people know that you have Chekhov’s gun and John Bolton’s the guy waving it around.

The United States is stepping up digital incursions into Russia’s electric power grid in a warning to President Vladimir V. Putin and a demonstration of how the Trump administration is using new authorities to deploy cybertools more aggressively, current and former government officials said.

We should probably assume that, for the NYT to report something like this, they’ve known about it for some times and negotiated with the government to bury the story until some time when it wasn’t going to influence the political landscape. Hey, look around! Now would be a great time, wouldn’t it? Surely that’s also a coincidence.

Advocates of the more aggressive strategy said it was long overdue, after years of public warnings from the Department of Homeland Security and the F.B.I. that Russia has inserted malware that could sabotage American power plants, oil and gas pipelines, or water supplies in any future conflict with the United States.

Sadly, there are no wise parents in the room to give these children a dose of “sit the fuck down shut the fuck up.” The US says none of the rules apply: [icrc]

First, because of its increasingly ubiquitous reliance on computer systems, civilian infrastructure is highly vulnerable to computer network attacks. In particular, a number of critical installations, such as power plants, nuclear plants, dams, water treatment and distribution systems, oil refineries, gas and oil pipelines, banking systems, hospital systems, railroads, and air traffic control rely on so-called supervisory control and data acquisition (or SCADA) systems and distributed control systems (DCS). These systems, which constitute the link between the digital and the physical worlds, are extremely vulnerable to outside interference by almost any attacker.

Second, the interconnectivity of the Internet poses a threat to civilian infrastructure. Indeed, most military networks rely on civilian, mainly commercial, computer infrastructure, such as undersea fibre optic cables, satellites, routers, or nodes; conversely, civilian vehicles, shipping, and air traffic controls are increasingly equipped with navigation systems relying on global positioning system (GPS) satellites, which are also used by the military. Thus, it is to a large extent impossible to differentiate between purely civilian and purely military computer infrastructure. As will be seen below, this poses a serious challenge to one of the cardinal principles of IHL, namely the principle of distinction between military and civilian objects.

Moreover, even if military and civilian computers or computer systems are not entirely one and the same, interconnectivity means that the effects of an attack on a military target may not be confined to this target. Indeed, a cyber attack may have repercussions on various other systems, including civilian systems and networks, for instance by spreading malware (malicious software) such as viruses or worms if these are uncontrollable. This means that an attack on a military computer system may well also damage civilian computer systems, which, in turn, may be vital for some civilian services such as water or electricity supply or the transfer of assets.

I’ve been involved in writing position statements like that, and it’s a complex time-consuming highly politicized process. Someone drafts the opinion then everyone pounces on it and edits it, then the original author repeatedly fixes the language and tries to keep it coherent. Eventually after months, you have a bland-seeming highly compressed policy statement like the one above. The point is: by the time it’s done there’s not a lot of disagreement and ambiguity left. The US has been consistently ignoring the fact that targeting another country’s power grid is a crime against humanity. 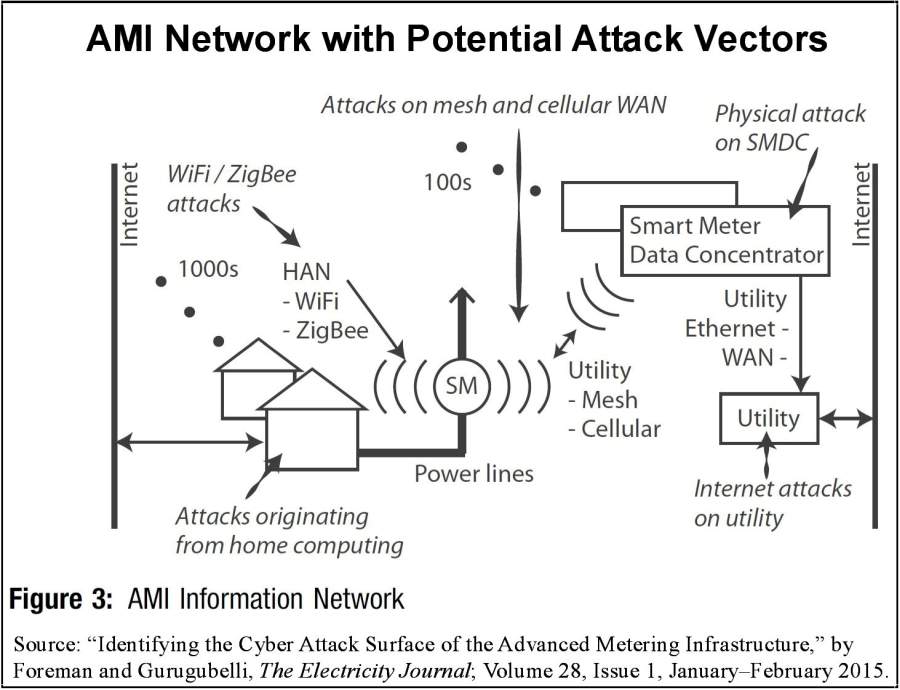 The response of the US is predictable: “it’s better than dropping a bunch of bombs on you, which is what we’ll do if you don’t shut up.” International humanitarian law is an attempt to restrain power, and US power accepts no restraint.

You can bet your ass that the US wants it both ways: it’s a crime against humanity if the Chinese do it to us, but it’s just a perfectly reasonable response against Russia. Note that, in order for this sort of scenario to obtain, it means that the US has already had to establish a control foothold in the Russian grid – exactly the same thing the US has been complaining that the Chinese and Russians have been trying to do. This is the neatest possible demonstration that hypocrisy is equal to exceptionalism.

As I mentioned before, when the US complains that someone is planning to do ${bad_thing} you can be pretty certain it means that the US is actually doing ${bad_thing} to someone else and that’s why they’ve only just now had a chance to think about it and realize that it’d be a ${bad_thing} if someone did it to us.

By the way, it oughtn’t surprise anyone that power grid systems are pieces of shit, security-wise. They’re designed with the notion of saving costs, which means that they were usually built with lots of shortcuts in the design – a system designed for security would be much harder to build (and more expensive). The big problem is that a smart grid system is a messaging bus with a command/control architecture atop it. That usually means that the messages come from someplace (?devices, generators, etc) and are transmitted within the bus, to places that make automatic executive decisions based on those messages. That guarantees that message integrity of origin is going to be a big problem. It also means that message structure flaws are going to be a big problem. So: what happens if we inject spurious messages? What happens if we inject messages that are over or under-sized? What happens if we capture yesterday’s messages and re-inject them? (replay attack) These are basic attack-hypotheticals, if I were examining such a system’s design, I’d ask the designers how they built the system to resist those attacks. Computer programmers being how they are, I’d expect them to sit there with their jaws hanging and maybe one of the more energetic ones would say “we use Java and SSL so it’s secure.” That’s without the more subtle errors like considering if a cascading failure could be induced, or how the command/control interface’s users are authenticated and the integrity of their systems. Smart grid systems could have all the good design in the world but it’s pointless if the user is accessing it from a Windows desktop full of NSA, Chinese, and Russian malware.

I grabbed the picture above for some decoration and couldn’t help but laugh because it’s a from an article that’s all about what I just described in the preceeding paragraph. Apparently smart grid “smart meters” have a variety of messages that they send, which are completely trusted by the control plane. The paper I got the image from is hypothesizing that a denial of service attack via smart meters is reasonable – I’m more inclined to look for how to cause massive billing anomalies and I wonder how they disambiguate correct messages from spurious ones. [DCA]

The Hong Kong Situation » « What is The Pentagon’s CO2 Footprint?