Gout is a form of arthritis that happens when your kidneys don’t do a good enough job getting the urea out of your blood and the stuff starts to crystalize in a joint. That triggers a cascading reaction as swelling brings more blood and urea.

I think I was suffering from various gout spots for nearly a decade. I remember back in 2008 when I was building out my darkroom, my ankle began to hurt like crazy and I did not know why. I assumed I must have jumped down from a ladder and maybe hurt it, or something, and wrapped it up with an ace bandage and stumped around, whining under my breath. I didn’t really figure out what was going on until about 2017 when one of my toes suddenly swelled up like a hot dog trying to burst on a barbecue. In fact, it felt like that, too.

For me, dealing with gout is straightforward: I have to keep my weight under 210lbs and I am fine. Also, drink more water, which is a problem because plain water is gross; I always feel like I am going to choke on the stuff. A simple solution is to add a few molecules of crystal light ice tea or punch or something that changes the color and gives it some flavor. Then it’s a “soft drink” and my brain accepts it happily. 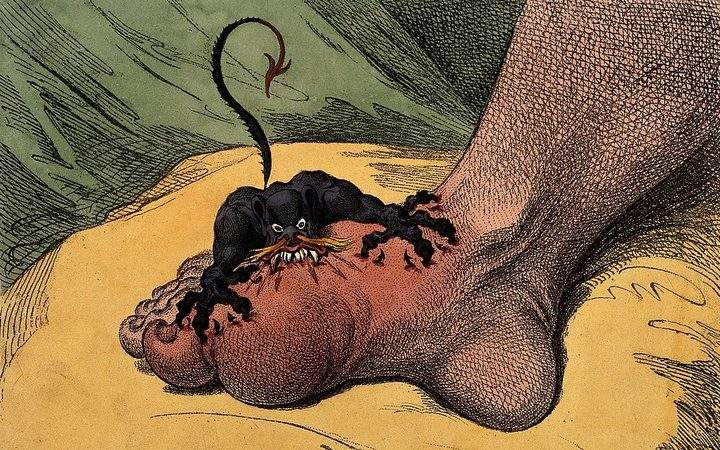 That is a remarkably accurate illustration of what it feels like.

The part I really don’t like is how it affects my consciousness. I don’t know if it’s urea in the blood stream or deferred pain, but I feel slow and woozy when the attack comes on.

Long-term, gout sucks. The joints get inflamed and don’t ever go back fully to their original size and position. I have one toe that is pretty much ruined; it’s bigger and more sensitive. I attribute all this stuff to simply having survived nearly 60 years, and this is the price we pay. “It could be worse, lots worse” is my mantra.

There’s some sort of thing that has been going on on the top/arch of my right foot, and it has gotten bigger over years. If I wear tight shoes it gets revenge by getting bigger, too. So I no longer wear cowboy boots, which sucks because I have had quite a collection in my day. Sensible shoes seem to be a part of getting older, but I can’t wear anything until it has been broken in over that spot, which is problematic to say the least. I used to break in shoes by taping a thin piece of curved steel over the parts of my foot I wanted to protect, then putting on socks soaked lightly with vodka, then I’d wear the shoes for a day. That, seriously, does a great job of conforming a pair of shoes to your foot. Now, it just hurts.