“Unorthodox survival methods” sounds like it’s deliberately bypassing the orthodoxy, which is also known as “what works.” 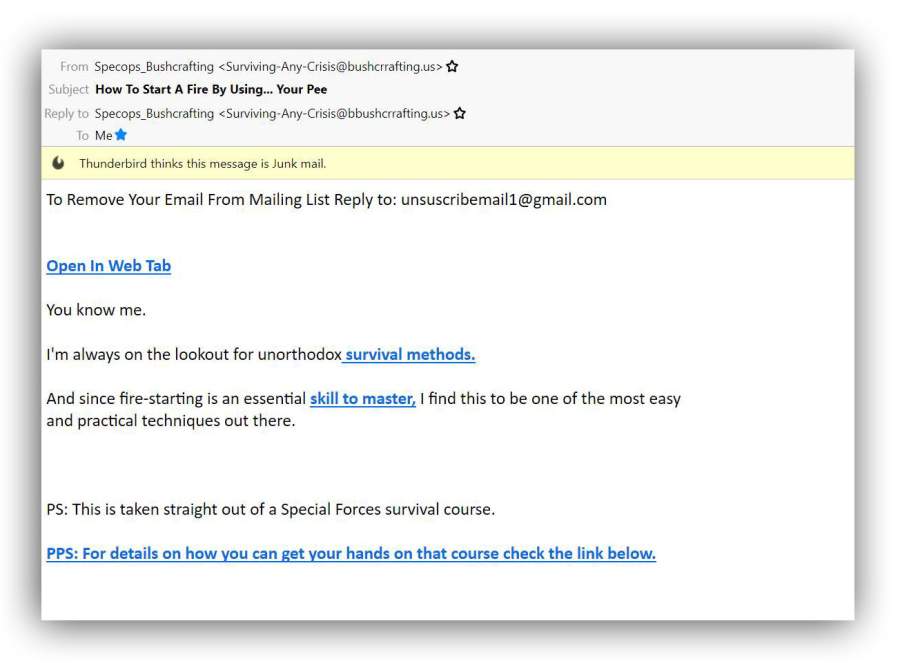 That one actually tempted me, but I’m going to wait until they offer to teach me how to make a rocket launcher using just poop. From scramjet to scatjet in one step!

What might be the method? I suppose if you peed into a bottle you might be able to make a focusing lens and use solar energy to light something. But water would work as well. I can’t think of much that the urea in pee would do, so I’m assuming it’s water for all intents and purposes.

I’m thinking the trick may be to hang around outside a drug testing center and offer to trade your pee for a lighter.

One of the things that annoys me about survivalism is that it usually ignores the threat model. If you’re dealing with a viral plague, pee may not be as good as thing to start fires with as rubbing sticks together. To take a more extreme example: what if your survival situation is that you’re in the middle of a firestorm and your problem is not “starting a fire”? Learning to start a fire is useful, no doubt, but not always and not always at the right time. My dad convinced me to read Jack London’s To Build a Fire [wc] when I was a kid, and rather than encouraging me to be more fearlessly independent, it convinced me that “camping outdoors” was a dumb idea to be avoided. That book made me take camping off my list of entertaining pastimes; thanks dad!

If “heat” means that the molecules in a piece of metal are moving around, then any external thing that makes them move faster means you’re heating it up. So if Alec Steele takes a smallish piece of metal and whacks it with a hammer a lot, then it heats up. If you whack it enough, fast enough, it becomes red hot and can hit kindling temperature in another material. Friction is a more popular way of heating things up. Peeing on things is less popular because it’s less effective.

Randomness » « Pictures of a Black Hole