One thing I have been pondering is what to do with the various knives that I am turning out. I think I have a solution.

Back when I was doing wet plates and boxing them as display-pieces, I hit upon the idea of listing them on Ebay with a starting price of $1, to see where the market wound up valuing my work. That was an interesting experiment; I learned that the market’s valuation of an artwork bore no resemblance to mine, or to how much work it took to make the thing. For example, I might spend 3-4 hours making and staining and sanding a wooden box for a plate, and a bare plate that I thought was so-so would fetch twice as much. In the end, though, I wound up with a couple of loyal fans who collected most of my output between them. I stopped selling plates, mostly because of the annoyance factor of boxing them and shipping them and doing the commerce side. One boxed plate I did got parked on by a UPS truck (or something) and the box was completely destroyed, so I had to get the plate back, construct another box, etc. It was frustrating because I had someone else’s money in my hand, who wanted me to hurry up and re-do some difficult work I had already done to my satisfaction, once. 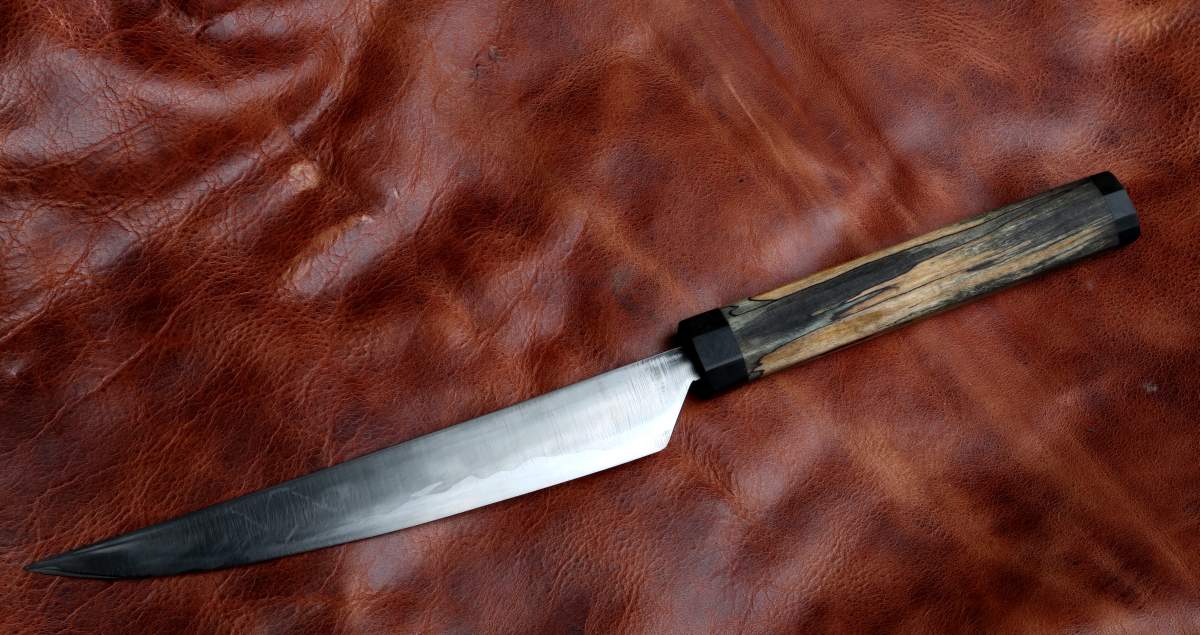 So, what to do about the knives?

I am fortunate that I’m sitting at the end of a long and fairly successful career in IT security; more money would always be nice but I don’t need to turn my hobby into cash. In fact, I’ve found that turning your hobby into cash is a great way to turn your hobby into work and eventually hating it. Programming computers used to be my hobby, so I’ve got ample experience with how the realities of the market can suck the fun out of a thing. I don’t want to turn knife-making into a job, and it’d be a horrible decision since I’d be starting at negative several tens of thousands of dollars in gear. I’m so far in the red that I’ll never break even – that can be liberating, sometimes, other times it’s a horrible weight tied to the ankle of your creativity.

What I think I will do, subject to change if I get a better idea, is auction knives off periodically, and pre-designate the beneficiary. That way, someone can get a knife and help some cause at the same time. Perhaps someone might think, “Marcus’ knifes are pretty much crap, but I am willing to pay way more than it’s worth because it’s going to the Mother Theresa Home for Starving Bloggers” or whatever.

Another problem that I am going to solve this way is: mistakes. When you spend hours staring at a piece of work, you come to know it pretty well; every little bit of it, every flaw. I know the little asymmetries and scratches, the spots where I wish I had shaped something better, or polished a bit longer. I don’t want someone to get their hands on a knife I made and say “I put this thing on my surface plate and your edge-line is off by thousandths!” because I already know that. Some of these things wind up with problems that just aren’t going to get fixed because I’ve moved on to something else and I’m done with it. What I’m going to do is post each knife with a critical review of its flaws – sort of a disclaimer and a warning at the same time. “What you get is what you get” with a term-sheet, if you will. That way, if someone doesn’t mind grinder-scratches on the bevel, they can go into it not expecting a perfect mirror polish.

That leaves the mechanics of running an auction for a beneficial cause. I could put these things on Ebay, but then I will either get lost in the great noise or I’ll have to re-activate my facebook and twitter pages and promote the auctions there. In which case there will be well-heeled internet security practitioners maybe bidding for the curiosity value of having a blade made by me. (Note: knives are only interesting in technical terms, the fact that my hands made something does not show anywhere in the work!) I figure I’ll post something and people can bid in the comments or anonymously be emailing me and when the auction is over, the winner can donate to the selected cause, or send me money and I’ll do it – then I’ll send the knife.

The first experimental listing will be in a couple weeks, and it’s going to be the thing pictured above – “Chef’s pwning knife” in 1095 and 15N20 high carbon steels, with ebony bolsters and resin-impregnated spalted maple octobox handle. It’s sort of a cook’s short sword – overall length is about 14″ and it’s thick across the back so it’s very stiff without any give or mercy to it at all. It cuts well and I haven’t really bothered to sharpen it yet. The edge of the blade shows a transition-line between the 1095 and 15N20, that’s not a temper-line – it’s 3 layers of steel welded together and hammered into shape. This knife will benefit the Freethoughtblogs defense fund, to help defray costs from Richard Carrier’s lawsuit.

Regarding cost: the materials that go into a knife like that are about $20 if you factor in the propane, sandpaper, glue, steel, etc. A lot of high end fancy damascus knives fetch $500-$2,000 with the typical price being in the $500 range. I don’t think that the damascus makes the blade better (in fact mis-forged damascus is dramatically worse) it’s just a way of making a unique piece. I do not expect that someone is going to throw down money like that for one of my knives (perhaps someday but not today!) so I expect it to go for something pretty reasonable. Especially since I’m not dead yet and there will always be more and they should always be improving.

Notes on product photography: Here I tried to illustrate some of the techniques for a good product shot. This is not a great example but it’s what I got. Blades are hard to photograph because you need some big highlights to show that they are shiny, but the highlights obscure the detail in the metal. Usually the way to resolve that is to under-expose slightly and “pull” the exposure up in photoshop with a curves adjustment layer, as I did here. I was also careful to angle the camera so it picked up reflections on the wood, showing that the wood is fairly polished but not glossy. The “big soft light” look is because the only light in the scene is a giant softbox directly overhead. A sense of depth and scale are provided by the leather background, which is neutral but gives the brain lots of detail to play with. You’ll notice there are no shadows in the shot; this is not a “fine art” still life photo in which I would be showing off my painterly ability to create depth using cinematics – the light is directly overhead and bouncing right back off the knife into the camera. I actually didn’t use the strobe; I just let the modeling lamp in the softbox provide all the light.