The overall process of knife-making seems to be pretty standard. Weld, shape, grind, quench, grind, polish, do the handle.

Most of day 2 was grinding and talking about the handle. That was a really really interesting problem for me, because, while I had definite ideas how I’d do the handle, I didn’t want to just tell him, “here’s what to do.” It became a collaborative process, with me laying out lots of options and then estimating what was easier, what was harder, what would look good, what would be strong, etc. I also had to keep things practical, i.e.: “You can’t use my ebony supply. Sorry, but.” Fortunately, Maat likes dark metal music, too, and it was easy for us to both goth out. Especially since the celtchete was going to be a big chopper thing that belongs in World of Warcraft (a WoW orc would use this thing to clean under his fingernails) (who am I kidding, they don’t clean under their fingernails) – so the decision was arrived at to do sterling silver with bog oak, in a sort of stacked configuration like this: 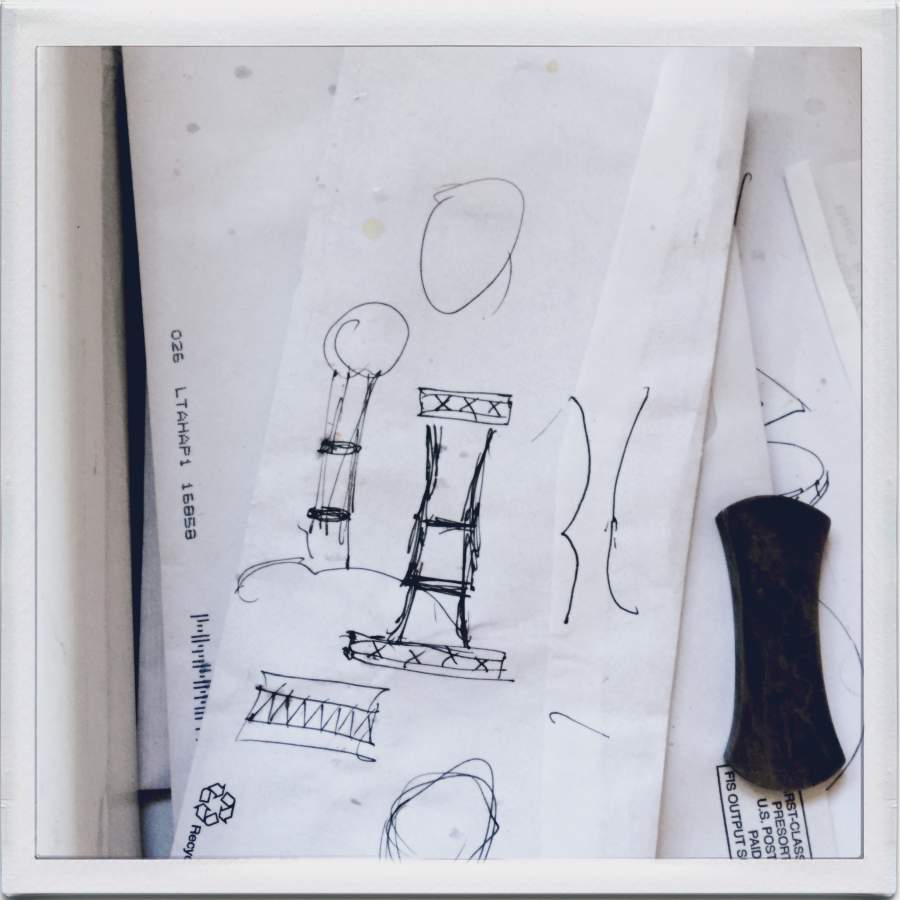 There will be 2 big sterling disks with a layer of bog oak between them, which Maat will file a pattern into the edge of (just the oak), then a bog oak handle interrupted with 2 more sterling disks, and a pommel consisting of 2 smaller disks with another patterned bog oak spacer. It is out opinion that, if that works, it’ll look pretty “metal” indeed.

While we were figuring out what to do, I invented a way of explaining the planning process for a knife: going to Chicago. You can start going to Chicago if you only have a rough idea where Chicago is. But get some kind of transportation, and head Chicago-ward, correcting with more precision as events uncover themselves. So we have a rough idea how the handle will look and it was rough enough but still precise enough that we could proceed without having the exact GPS coordinates of where we were going. It feels weird – we have a solid plan but it’s pretty squishy for a solid plan. As a friend of mine said “knife-makers don’t make mistakes, they just make shorter, thinner knives.” We didn’t say we would take the most efficient or prettiest route to Chicago – we’re just going to get there, somehow.

Once we knew where the handle was going all the subsequent work on the blade could be informed by that sketch. Which meant that Sunday morning, while all the christians were worshiping their imagination, he quenched the blade and then went back to grind grind grind grind. 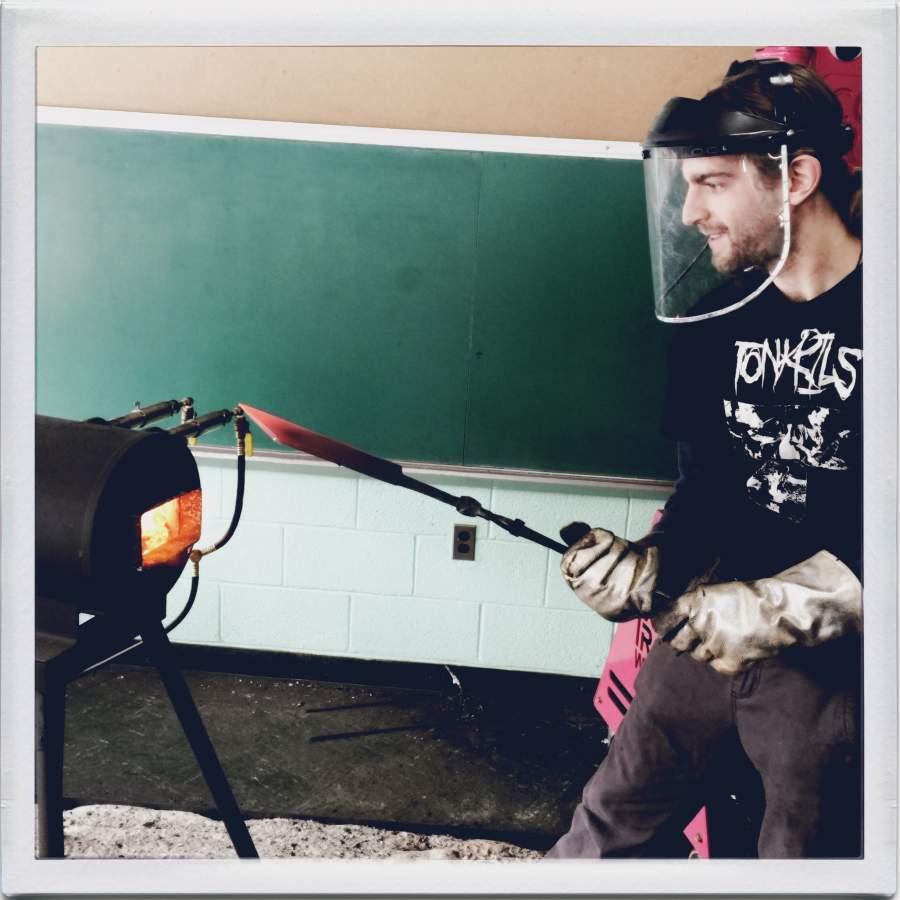 Quenching is a great exercise in teaching thermodynamics. You keep heating the blade and letting the heat from the tip migrate through the whole blade. Look at the dark spot behind the hot zone: the tip and edges heat faster but eventually you get the whole thing to a balanced heat and it’s ready to dunk. 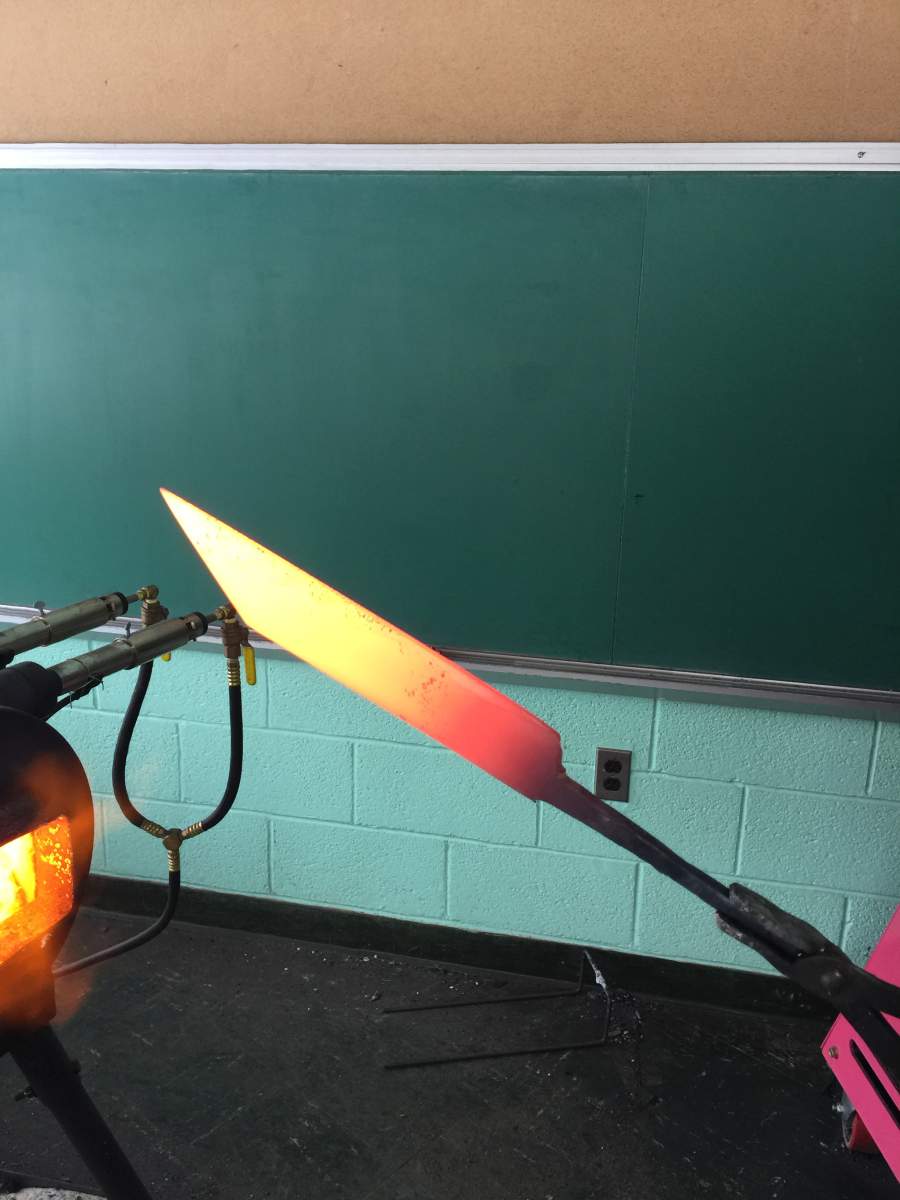 The quench succeeded and the result was about RC 55-60. The edge is a bit harder than the back because of how we tempered it. It was interesting and fun trying to assemble my understanding of how the different state-changes of steel affect the behavior of the blade. The good news is that celtchete is tough and solid and will hold a good edge and it looks strong enough to chop down trees and spread brie afterward. In fact it looks like you could spread an entire brie cheese with one pass of the thing. 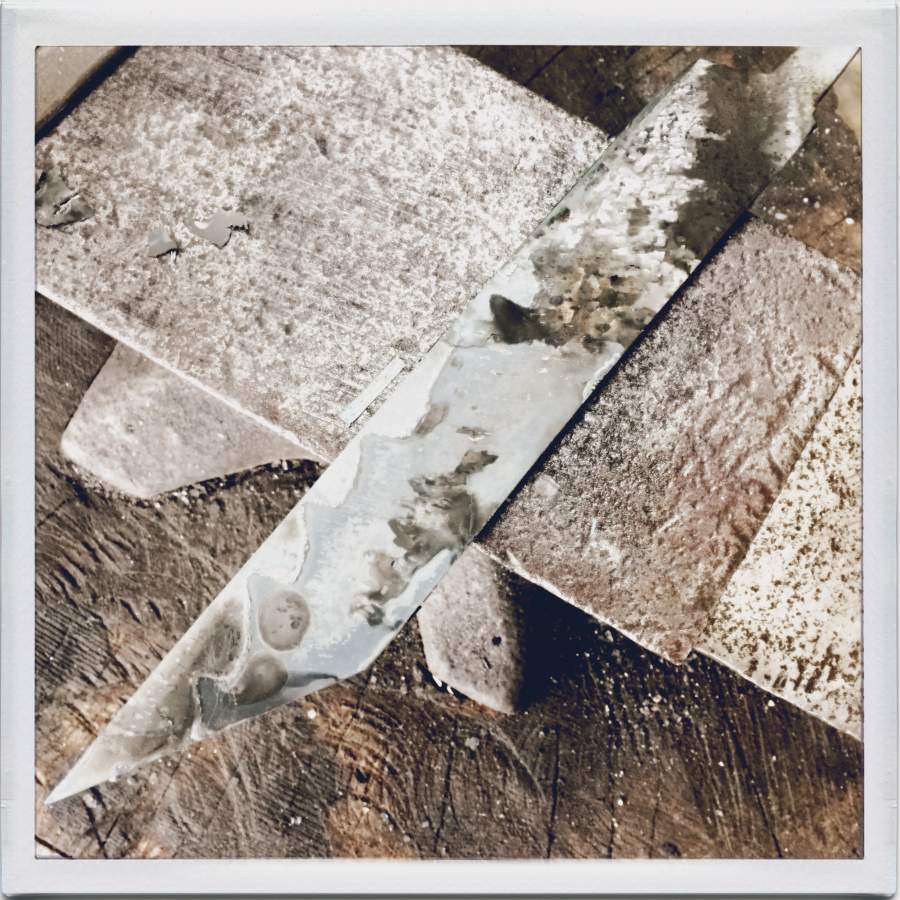 Quenching it is interesting because you really get to see the different oxidation-rates of the steels where they are exposed. the 15N20 on the sides of the blade didn’t oxidize as much as the 1095 core which headed right toward black. Well, that’s the carbon. And the transition-line becomes very visible – probably tiny amounts of slag trapped in the weld(?).

A bit of grinding on the belt sander and a quick dunk in ferric chloride to see what it looks like, and to check for cracks or welds that separated in the quench: 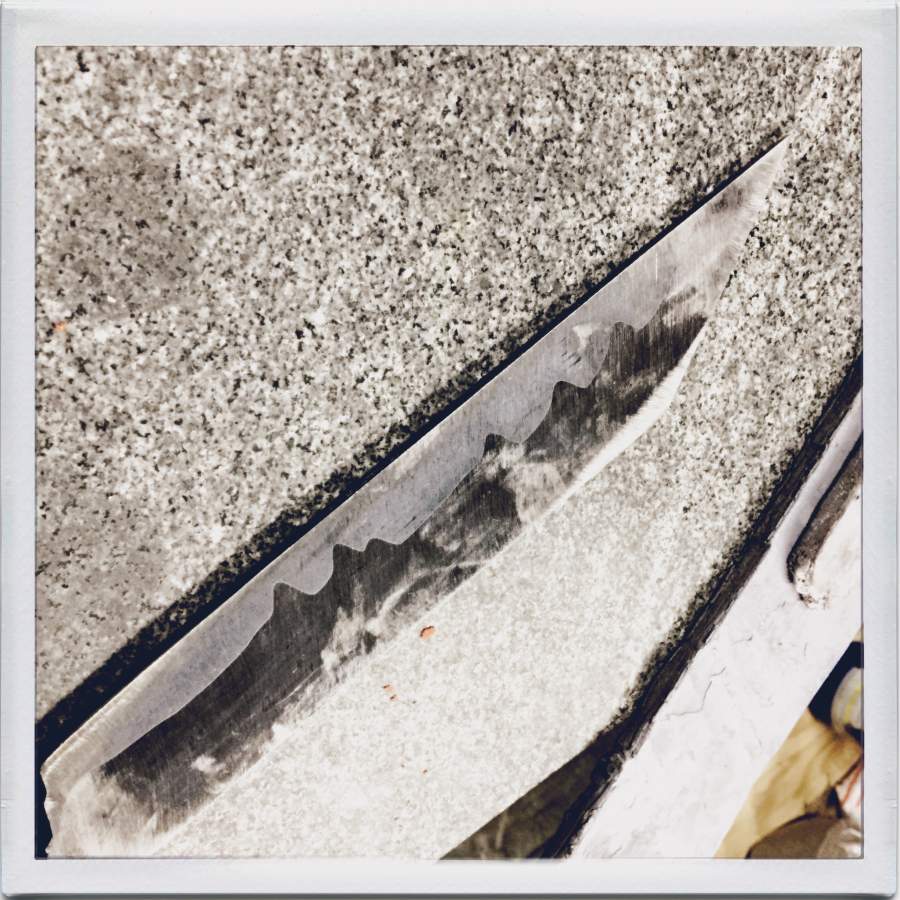 Does it look like the colors inverted? They sort of did; the way it reflects light changes when it’s wet or at a different angle.

By the time Maat was getting close to the edge, he was used to the grinder and could make a nice flat surface. I did some tweaking here and there but Maat did most of the work. By the time the blade is starting to come together, its geometry begins to dictate where the rest of it will go – you can see mistakes easily and correcting them usually is a matter of making the line on one side match the line on the other. As that process continues you wind up refining the blade to be self-consistent.

Unfortunately, Maat had to leave sunday afternoon and the weather was looking nasty. So we had to figure out what to do next. The plan we agreed on is that I’ll fine-grind the blade and get it to a reasonable finish, then I’ll do the components for the handle and shape them but I won’t do the final tweaking and assembly. I’ll mail the whole lot to Maat and it’s his problem from there.

At one point while he was grinding, I nipped over to the wood shop and used the bandsaw to cut out ABS plastic to make a scabbard. We wound up changing the dimensions of the blade so much the scabbard won’t fit, now, but I’ll probably do another one. ABS scabbards are wonderful – easy and quick to make, sandable, and you can make them look very traditional by wrapping them in leather or cloth and studding them up with pins or edging.

So, now we all pause to catch our breath. This is what the celtchete currently looks like (with a spritz of WD40) 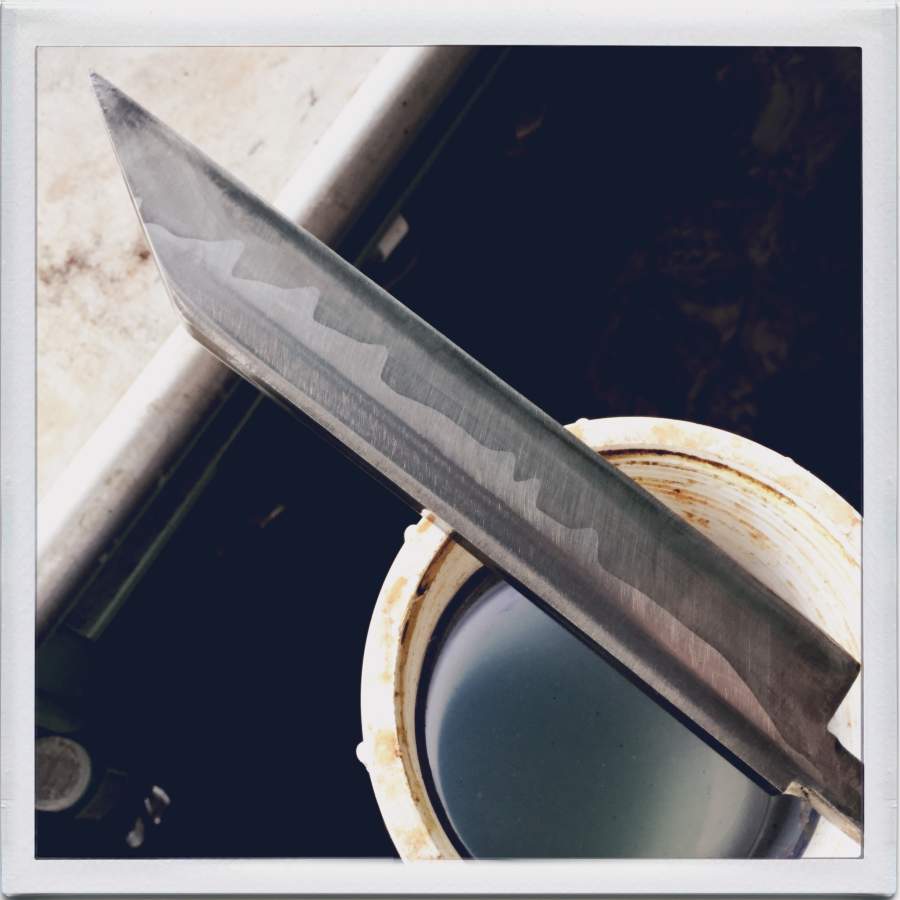 leaning on the top of the ferric chloride tank

Caring About The Workers » « The Adventures of Florida Man