It used to be pretty bad; there were “booth babes” and strippers – the venture-backed California code-bro culture that James Damore was so eagerly defending. My company used to send me every year, and I’d do interviews and started to get increasingly sarcastic, until finally I was relieved of the duty when I threatened to do booth duty wearing stripper heels and a knife-pleated skirt. [ranum] 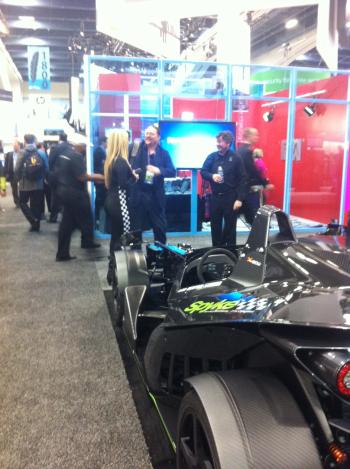 2013, mjr and Gary McGraw talking to a very self-actualized hourly marketing expert who said “I don’t know anything about any of this stuff but they’re paying me $11/hr to stand here and I like money.”

Last year there were 4 or 5 booths that had some kind of ludicrously expensive sports car, or a flock of young women showing a great deal of spandex and curves. I suppose if a vendor has absolutely no real marketing message, that’s a substitute, but I suspect that even the most out-of-touch customer is not going to mistake a firewall (or whatever it is) speeds and feeds for that Ferrari’s top speed. How does dollars spent, length of inseam, or miles per hour, correlate to telling us something useful about:
– The quality of the product?
– How well it meets customers’ needs?
– How easy the product is to use?
– The company’s ability to innovate?
Actually – it tells me quite a lot. It tells me I’m looking at a company that has a marketing organization that’s as out of touch as the management team that approved that booth set-up. Here’s a good idea: replace the Ferrari with a cardboard cut-out of a Ferrari and use the money you just saved to hire a new marketing team.

I truly do not understand how I got a reputation for disliking marketing people. I hate the culture, not the individuals.

This summer someone I’ve done a lot of work for, in the past, asked me if they could put me on a panel they were proposing, and I said OK, so now I’m going to be going to RSA one more time next year. I love Yank Sing and there’s an amazing place in Oakland that makes hand-pulled noodles, so, “why not?”

The last time I went to RSA was in 2015, and there were a lot fewer booth babes, sumo wrestlers, and Ferraris. Unfortunately, the marketing geniuses of the world had decided to slant toward ultra-nationalism instead: there were companies openly advertising that their products would help keep evil Chinese hackers out of the network, including pictures of people in People’s Liberation Army uniforms (at least the Chinese hackers don’t wear ubiquitous hoodies, right?) It was brilliant marketing: let’s try to piss our important business partners off!

Once I got the notice that RSA had accepted the panel proposal, I had to go fill out a ton of speakers’ forms and authorize this and that, and there was:

This stifling political correctness is kind of refreshing.

Sexual harassment and victim-blaming are a problem in every community, including computer security. I tried to get a bunch of computer security speakers to agree to not support any conference that did not have a clear anti-harassment policy, and got a lot of push-back; it was a disappointing surprise. [ranum] The incident I am referring to there was well before the incidents with Jacob Applebaum or Morgan Marquis-Boire.