According to Pagetutor, this is what $1Bn looks like, if you palletize it: [page] 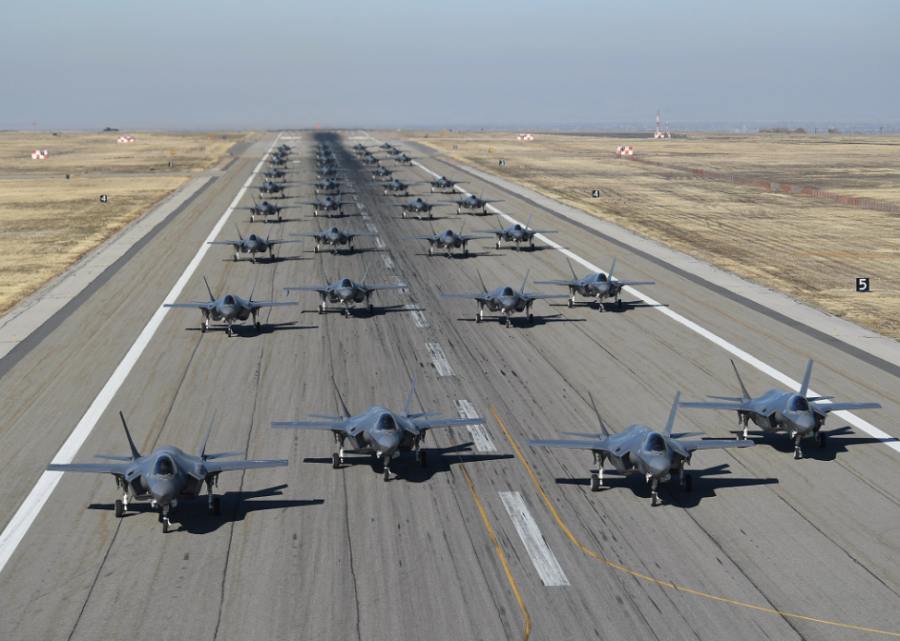 Take a look at that. That is probably the last time that the US Air Force will exist in such a form, ever. That is the display of over-priced, unmaintainable, short-legged imperial hubris that represents the high-water mark of the US Air Force. That is such an expensive mass of aircraft that the US Air Force has doomed itself to becoming not much more than a maintenance supply-chain for those gilded hangar queens which, hopefully, will never fulfill their mission. Those aircraft are designed to attack Russia or China; those are the only powers that have remotely the defensive systems that require 5th generation stealth/fusion aircraft to assault. And “assault” is the right word: stealth aircraft are first-strike weapons – they are more or less useless for fuck all else. The Air Force, however, will do a tremendous amount to show they are still relevant: they will fly those expensive hangar queens in air-strikes against peasants with AK-47s, wearing flip-flops and blankets. They will fly those expensive hangar queens in deep strikes using their stealth capabilities, to drop 1,000lb bombs on hospitals, funerals, and weddings. You don’t need stealth when you’re bombing Médecins Sans Frontières, because MSF doesn’t have aircraft or anti-aircraft systems, but why not let’s send the very best? By the way: it’s going to lose. The only battle the F-35 is equipped to win is one that hopefully it never will fight: a stand-up first strike on Russia or China.

It’s almost certain that the F-35 will destroy the Air Force by eating its entire budget in a couple of gulps. The plane is not just overpriced as a plane it’s dramatically, hugely, spectacularly overpriced for its mission. The F-35 will almost certainly never do anything but drop bombs on mostly undefended targets; its amazing stealth will be irrelevant because guys with flip flops and blankets don’t have powerful antiaircraft radar. If an F-35 is ever taken under fire, it will probably be ground fire from AK-47s (which will miss) or perhaps a 1980s-vintage MANPAD which will go right up its tailpipe because of its massive heat signature. So, if its mission is to “go blow up 10 guys” and those guys cost an enemy $10,000 – the F-35 is a $200 million weapons system delivering a $1 million bomb. It’s a great technology demo but it makes a little bit less sense than Elon Musk’s launching a car into deep space for a mere $100 million.

The picture above is what the Air Force chucklefucks call an “elephant walk” – you can imagine a drooling redneck chanting “doh dee doh dee doh dee doh…” into the radio as they taxi carefully down a runway. Then, they roar into the sky with screaming engines, make a big circle or two, land, and head in to the shop for some expensive maintenance. [ni]

The Hill stealth fighters took off one at a time in roughly 30-second intervals. In just a few minutes, the wings launched as many F-35 sorties as they normally do in a full day of routine training.

“Exercising with multiple squadrons of F-35s can demonstrate our ability to defeat potential adversaries wherever they may arise,” Maj. Caleb Guthmann, the 34th Fighter Squadron’s assistant director of operations, said in a statement .

Maj. Guthmann neglects to mention that you only need one of those F-35s to bomb a wedding. Beyond that, it’s overkill.

In a March 2018 congressional hearing, Lt. Gen. Jerry Harris, the air force’s deputy chief of staff for plans, programs and requirements, said it cost around $50,000 to fly one F-35 for an hour. That’s roughly twice what an F-16 costs for an hour in the air.

And F-16s are expensive. Basically, the “elephant walk” is the biggest declaration of “we haven’t got a strategy” ever. For one thing, those F-35s are all in Utah. It would take long flights and many refuels at many air-tankers to get them anywhere where they could do anything useful. And, when they got there, they’d need maintenance. The article I pulled the picture and quotes from goes on about how:

In fact, there’s one region where mass-takeoffs are an important military procedure: the Korean Peninsula.

Presumably so they could get them all into the air and over North Korea to attack all the things before a nuke goes off in Seoul. But demonstrating that a bunch of unarmed hangar queens can take off in Utah ought not scare the North Koreans much. As long as there are no Médecins Sans Frontières in Utah, there’s no threat: they’d need a massive fuel-train of airborne tankers to keep in the air if they wanted to go more than 750 miles.

Here’s why I believe that this represents the high point of the US Air Force: the F-22 inventory is dropping sharply; they are also incredibly expensive to maintain and are being grounded. Hurricane Michael destroyed at least 17 F-22s by saturating them with water; they’ll never fly again. [hill] The inventory is down to vintage F-16s and F-15s and B-52s – literally, air-frames so old that some young Air Force pilots are flying planes their daddies also flew. The cost and fragility of the planes means the Air Force is going to spend all its money on maintenance, and will almost certainly have to switch to a cost-effective unmanned drone. At which point, the Air Force is a commodity service and will no longer have custom, expensive toys. The F-35s are so expensive that they’ll never be fielded where they might get hurt. A commando team could disable a significant chunk of the US Air Force’s flyable fighter capacity, just like Hurricane Michael did.

By the way, this is what the US defense budget looks like for 2018:

By the way, it’s hard to get a good number, but some of those F-35s in the picture are from training wings – they are earlier models that don’t have actual weapons hard-points, or are running older versions of the software and don’t have control systems for weapons delivery. In other words, they might be usable as a weapon if you rammed something with them but that’s about it.