It’s fascinating to see the different ways that the “trade truce” is being reported. It also scares me because it illustrates how unquestioningly the press reports from government-issued press releases. 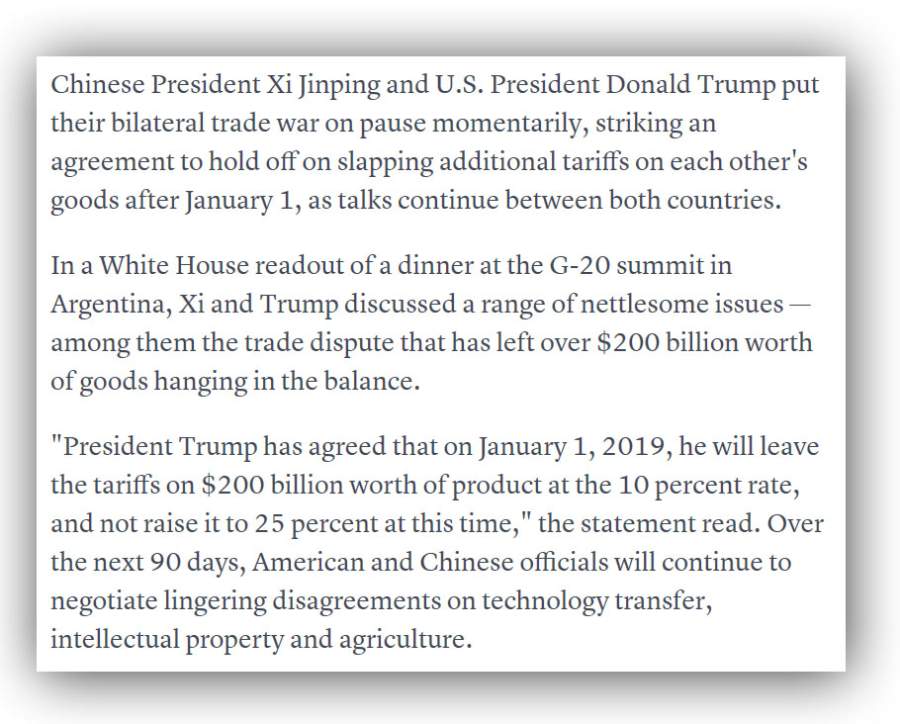 In other words, they agreed that there are a lot of points to fight about, but they’ve decided to constrain the fighting and make a few conciliatory gestures in the meantime. That’s almost … “diplomatic”  But look how it’s reported elsewhere: [wapo]

Reuters has a bit more stiffness: [reut] but is more or less word-for-word

Gotta hand it to those real journalists at Huffpo, who turned “energy” into “other products.”

Does anyone want to bet me that the US didn’t just force China to buy a whole lot of American Oil and Coal?

What else is the big dance around “energy” about?

Oh, and make things better for the farmers; those guys vote. In the weird bizzaro-world that is 2018/2019, we can expect the farmers to be thrilled at this gesture. Having had their plans and prices rattled and screwed up, now the Trump administration is trying to un-screw what they did, and they’re going to insist on being rewarded for unscrewing that which they screwed. Watch.

It’s just fascinating how this is being reported. Cut and paste much?

There are other points/items that China and the US have agreed to discuss like adults, including intellectual property, China’s refusal to let Qualcomm buy a competitor, the US’ refusal to allow Huawei to sell infrastructure, etc. And hacking. The US will want China to give some reassurances that they will stop hacking the US’ weak and vulnerable systems and the Chinese will point out that the NSA has backdoors in everything and maybe the US is a bunch of hypocrites.

GlamourBees » « Sunday Sermon: Is This All You Need to Know About Political Economy?