Some of the vendors I have occasionally done business with, appear to have decided they’re going to send me a big email every day for several days, with new “black friday” offers.

I interpret this as online marketing having reached its zero-point, or close to it. If you no longer have anything distinctive, or interesting, all you can do is game your profit margins lower and lower. Unfortunately I won’t get any further announcements from any of those vendors because, with one click on my spam trainer button, they are dead to me.

I wonder how so many online marketers all got the idea, at the same time, to do multi-day marketing pushes. Perhaps someone who despises internet marketers thought, “I will get them to all make fools of themselves at once; it’ll be more fun than the time I got all my friends to wear the same outfit to a party.”

As a brand-recognition exercise, this one’s really good (so they don’t get struck with the spam tag): 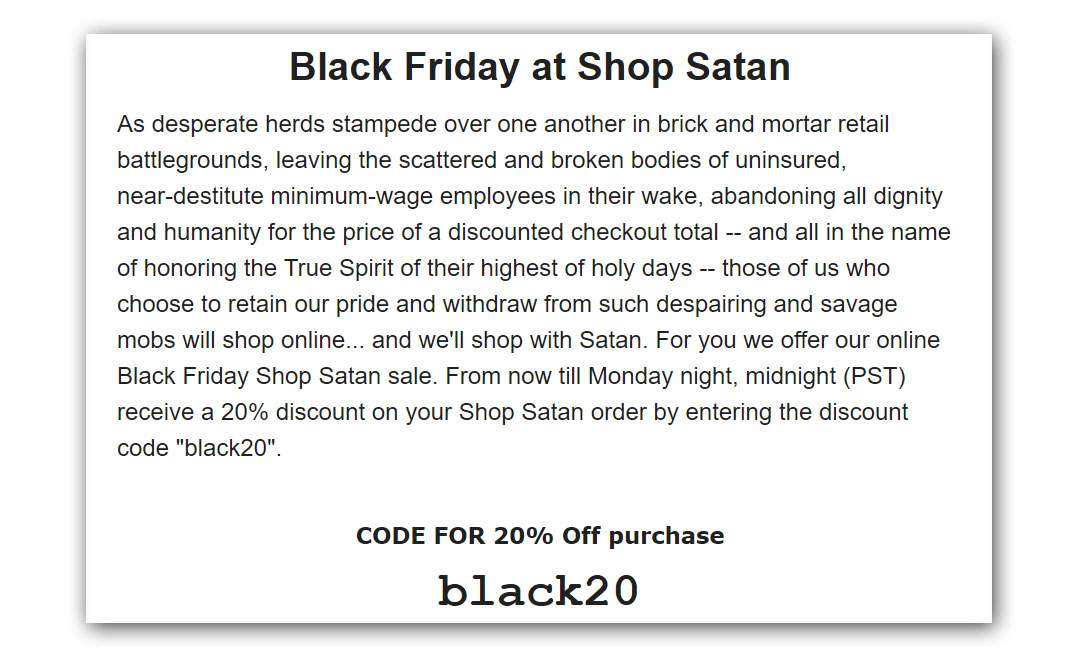 Christians have been marketing their brand for millennia, and they even promote it as generally superior to their own. When your competition’s messaging is “their product has been kicking our product’s ass in testing for 2,000+ years” – it’s marketing on the level of Harley Davidson’s “sure, our bikes are big and slow, but they’re also noisy and expensive, and really inefficient.”

Since humans create gods, I suppose it means we’re superior to them. No matter which imaginary deity is held up as “bigger, badder, more forgiving, and has the best hell” the theists are playing a silly form of rotisserie-league divinity. I appreciate the satanists’ culture-jamming and marketing savvy, but they’ve entered into a battle of wits that there’s no honor in winning.