The point is not how much has been done – the point is how much has to be done, and which isn’t being done. How much power does Kennedy have which he is not utilizing? Here’s a man who is in control of the most fantastic aggregate of power that any nation has ever held in the history of the world. And he can’t do anything with it to protect one or two people in a little town in Mississippi. This is incredible.

(A baby in the audience cries loudly) 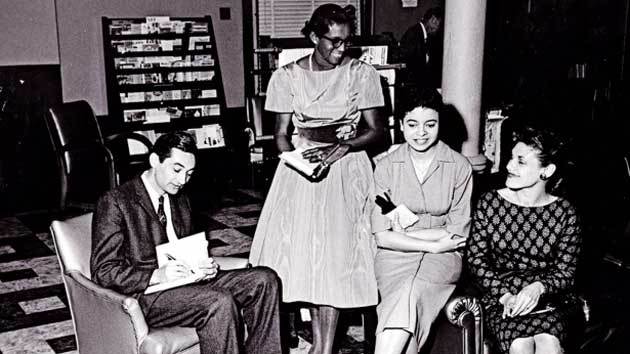 The newly-minted Professor Zinn at his first job, Spellman College

I suppose the problem is that basically we’ve always – even when we’ve been fairly liberal at times – it’s been a white liberalism. Racism has been dominant in our history and in our actions throughout. What I’m really arguing about, I think, is that we’ve got to look at our national political structure and we’ve got to recognize that there’s something about the national political structure – no matter who is in power, whether it’s the democrats or the republicans – there’s something about this which gets in the way of solving the basic human problems that have to be solved in our time.

This is important because here we have a bunch of people who are going out registering people to vote; doing a great job. What do you do when you walk up to someone and say “I think you ought to register”? What do you tell these people? Do you tell them “I want you to register to vote because that really is all that’s missing. All that’s needed. You see, we have a beautiful, working democratic mechanism, here, the only problem is that you are left out of it. If you will just enter this beautiful democratic mechanism, and join in it, you will then be able to do the things you want to do.”?

I think it would be truer to say, “If you register, and if you vote, you will then have as much power as the rest of us, which is very little. Very little.”

And I’m not singling out the American democratic system against other systems – I’m not saying our system is worse than other systems, I’m just saying it’s not that much better. And I mean this, for this reason: any mammoth social organization in the 20th century places huge obstacles between people’s needs and power. And this is as true of the United States as it is of any huge political mechanism in the world. We sort of fool ourselves, we read the constitution, we recite everything about the separation of powers, pluralism, and three houses of congress and voting and so on – and everything on paper looks good. But when you get down to it, there is something fundamentally wrong in that we cannot translate what people need into what is done at the top of the political mechanism.

On every one of these counts, most political structures in the world have failed. And on every one of these counts, the American political structure, in 1963, is failing. It is certainly failing in the area of equality. It’s failing also in another very important area – in making sure that the wealth of this country, which is incredible, does not get siphoned off into a relatively few hands and is not kept away from millions and millions of people. In the last year or so, poverty has been discovered in America. I mean that, it’s really been discovered. People have suddenly begun to write about the poor; they’ve been here all this time, they’ve been all around us, like the negro has been all around us. He can be right there, but you don’t see him. Ellison wrote about the invisible man – well, the invisible man not only applies to the negro, but it applies to the poor man. And we find that there are about eight and a half million families – 40 million people – in America who earn under $2,000/year but the picture we present to the world, and very often to ourselves, is of an affluent society – everybody is just doing great.

The Retroscope At Play » « Ask The Strategic Genius: The North Korean Threat