The US talks a lot about non-proliferation, and regularly joins with the world community to levy sanctions on nations that are not complying with the Nuclear Non-Proliferation Treaty. Iran and North Korea being prime examples of countries that have had a great deal of pressure (in the case of North Korea, the population has been starved) against their nuclear ambitions.

If you read the document, it’s surprisingly thin. [un] There’s a fair amount of “quid” and not a lot of “pro quo.” It can be interpreted as either an aspirational document – “it sure would be nice to control those nuclear weapons” or a statement of nuclear primacy. Because I am suspicious of state-craft, I tend to interpret it as the latter. Especially given how it has been enforced, which is extremely arbitrary. As you know, we are told that national sovereignty is very important except where it means that the nuclear-armed nations are going to get together and tell another country “you cannot have nuclear weapons.” The United Nations is used, sometimes, to produce resolutions saying “this country must comply with the NPT.”

Consider North Korea: they withdrew properly from the NPT by giving notice (as the treaty requires) in 2003. Of course, there were immediately sanctions slapped on them for that, but they were already under a pile of sanctions, so presumably they shrugged. The US and a few of its allies, naturally, made public comments about attacking the country, and publicly leaked that they had military plans for an assassination mission against Kim Jong Un. When the state that is threatening you has nuclear weapons, and you don’t, it’s hard to avoid seeing the situation as nuclear blackmail. According to Feroz Khan in Eating Grass Pakistan felt it was in just such a situation with regard to India – having gone to war with them already, and facing constant military threat backed by nuclear weapons, the Pakistani government stepped around the NPT and designed their own systems. I say “stepped around” because they didn’t exactly design their own nuclear weapons: chief Pakistani nuclear scientist A. Q. Khan learned centrifuge-making and enrichment processes from Siemens, A.G. Of course the “international community” was incensed, i.e.: the US and India were extremely unhappy. The US was unhappy because its presumption of authority was flouted, and India was unhappy because they could no longer safely engage in nuclear blackmail. We cannot say for sure, but it may be the case that India and Pakistan have more or less grudgingly gotten along ever since. 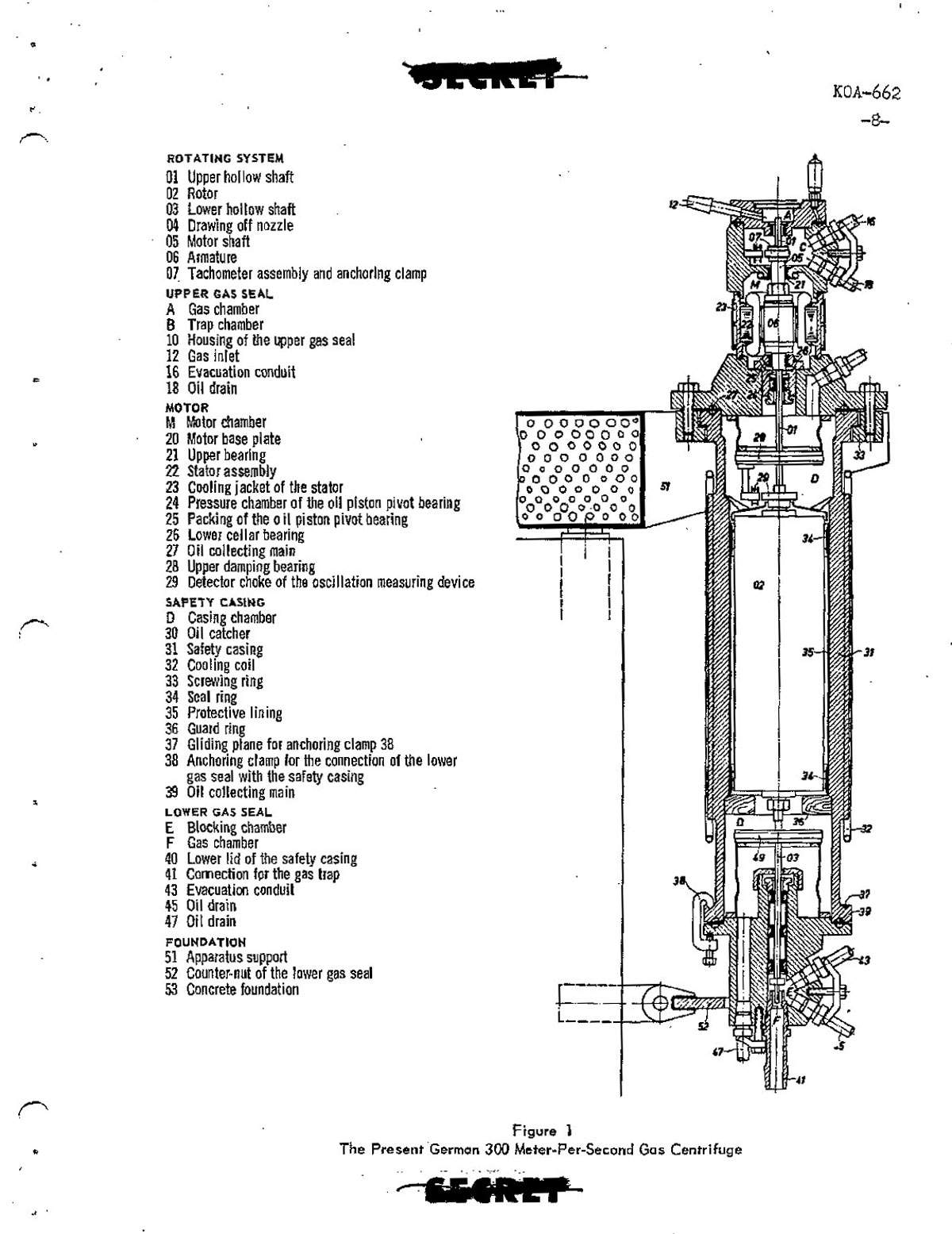 The German “300 Meter-Per-Second” centrifuge is … interesting. What’s the speed of sound? Feroz Khan says the Pakistani RP-1 is supersonic.

Nuclear blackmail is difficult to clearly fix, because the countries that engage in it are usually somewhat circumspect, though I think it’s appropriate to mention that the US mused loudly about using nuclear weapons in the Korean War, the Vietnam War, and Gulf War I and Gulf War II. A friend who was a U.S. Army Major commanding an artillery unit in Gulf War I told me about the “special weapons” ammunition carrier that tagged along with his MLRS battery: it parked separately from all the others and was guarded by a special guard detail 24/7. Saddam may not have had weapons of mass destruction, but there were weapons of mass destruction deployed to Qatar and then out to the field.

Proliferation is an even more interesting and complex problem, because it’s a bunch of engineering secrets, mostly. As Richard Feynman once said, “the secret of making a bomb is that it works; it’s all engineering.” The question is what engineering shortcuts you can make. A.Q. Khan, for example, designed the Pakistani RP-1 centrifuge, which was pretty much a Pakistani-buildable version of a German enrichment system (that the Germans learned to make from Canada) The elephant in the room is, of course, Israel – which never signed the NPT and never has declared itself as a nuclear power, but which has done some very interesting things, indeed. It appears that Canada was the teacher, or France (it is uncertain) and South Africa provided the uranium in return for allowing a test off its coast. The US has been willing to levy brutal economic sanctions on any country that does not sign the NPT, except Israel. Israel has done an effective job of nuclear blackmail, itself, by referring to “the samson option” (the myth of samson, who pulled down the building he was in, in order to kill a bunch of palestinians, uh, philistines) The US and its clique (NATO) have been very quiet about Israel doing everything that they accused Iran, Iraq, Libya, and North Korea of doing. But, nobody should expect anything but hypocrisy from the US and the US-controlled United Nations.

There are several chunks of jaw-dropping hypocrisy in the NPT. Almost immediately after it was signed, the US decided that the part of the treaty that says “do not go handing out nuclear weapons like they are candy” did not really apply to NATO as an entire entity. In other words, if you deploy nuclear weapons to Turkey, they are not “Turkish” they are still “American nuclear weapons” they’re just in, you know, Turkey. And the Turks won’t use them because there are some Americans guarding them with rifles. That was the same kind of ‘sharing’ arrangement that freaked out the US when the USSR attempted it in Cuba – but we’re different. The problem is that the NPT says giving “direct or indirect control” is not allowed, but the US somehow decided it doesn’t apply because, well, actually they never said: it just doesn’t. You can bet your last dollar that if North Korea offered to share some nuclear weapons with Iran, the US would not find it appropriate. Meanwhile, all NATO aircraft carry standard weapons-delivery interfaces that can support delivering nuclear weapons. So, depending on how dishonest you’re willing to be, the US has proliferated nuclear weapons to Germany, The Netherlands, Italy, Canada, Turkey and the UK.

Here, by the way, is the reasoning why the NPT does not apply to NATO: if there is a condition of general war against NATO, such that the US’ command/control capability has broken down, the assumption is that general war applies and the NPT no longer holds. In other words: “if we’re losing badly enough, we’re going to make sure you lose worse.” This all sounds rather sketchy, but if you don’t believe me, you can fact-check wikipedia. [wik] If anything, I am understating the case. Here are the relevant words: [npt]

Like most international agreements, this one has been written and vetted by lawyers; it’s pretty clear. The US just chooses not to understand.

The second gigantic bit of the NPT that makes my mind boggle is this one:

Each of the Parties to the Treaty undertakes to pursue negotiations in good faith on effective measures relating to cessation of the nuclear arms race at an early date and to nuclear disarmament, and on a treaty on general and complete disarmament under strict and effective international control.

Huh? Yes, you read that right. Disarmament is baked right in.

What has the US done regarding Article VI? Nothing. Oddly, the US has not called for the imposition of any kind of sanctions for this blatant violation of the NPT. Actually, the US withdrew from the antiballistic missile treaty with Russia, so it could produce highly destabilizing new weapons systems. No sanctions for that, either. To top it off, the US has embarked on a $1 trillion program to produce more precise variable-yield H-bombs which will also destabilize mutual assured destruction.

The UN has not discussed any sanctions against the US. The international community’s attitude is probably, “why bother?” They know the NPT is just a weapon for the nuclear club to beat everyone else over the head with.

I support a form of “mutual assured destruction” – in the event there is a nuclear war, the president’s guards should shoot the president through both knees, both elbows, and in the stomach. That way, the president will have a chance to experience the cost of failure while the missiles are on the way. The last person that we should struggle to save in the event of a nuclear war is one of the useless fools that started it.

Accuracy Is Not The Objective » « Happy Birthday David Attenborough