Here’s another one to add to the list of “ideas that won’t happen.” In high school, a friend of mine and I hit upon the idea of writing an illustrated book of “unusual family customs.” Sort of a Martha Stewart idea guide gone horribly wrong: quirky and surrealistic customs that families could enact with great seriousness, raising their kids as though the custom was perfectly normal. In his book The Anansi Boys, Neil Gaiman hits on one: the kids in the family are taught that, on presidents’ day, you are supposed to go to school and cosplay your favorite president. Other schoolkids did not understand why the child showed up claiming to be Millard Fillmore.

One of the jewels in our collection of ideas was the santa traps. The idea is, you build elaborate Rube Goldberg-style traps around the base of the fireplace, hoping to capture or even kill santa claus. That way, you get all the presents. Back in 2002 I mentioned this to someone I knew who had kids, and her husband thought the idea was so great that they actually did it – the youth contingent and dad kicked in and made a rubber-band activated plywood bear trap, which they put at the hearth of the fireplace, baited with cookies and a stocking.

Unfortunately, santa is on to this custom; the next morning, there were still presents around the tree, the cookies were gone, and the stocking for dad was hung – full of coal. 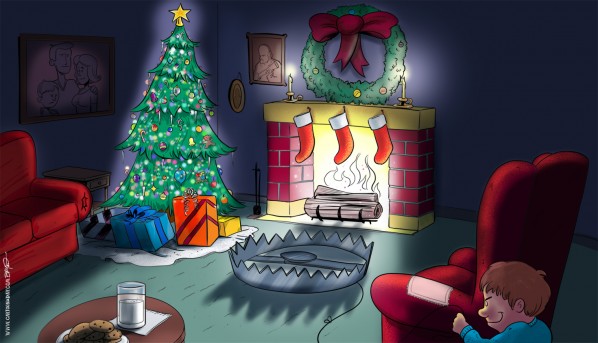 I promise I’m not farming you for ideas; the book is never going to happen. Anyone got any ideas for other fun war on christmas family traditions?

Seinfeld’s “Airing of the Grievances” and “The Feats of Strength” [fest] are pretty good.