“The next moment a hideous, grinding speech, as of some monstrous machine running without oil, burst from the big telescreen at the end of the room. It was a noise that set one’s teeth on edge and bristled the hair at the back of one’s neck. The Hate had started.” – George Orwell, 1984

The US ambassador to the UN, Nikki Haley, has accused Iran of supplying Yemen’s rebel Houthi movement with missiles to attack Saudi Arabia. [bbc] 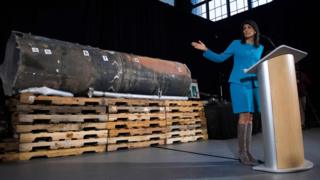 So, is the substance of the US’ complaint that Iran is supplying the Houthis more missiles than we are supplying the Saudis? What the what? The US’ $320 billion weapons sale to Saudi Arabia included a variety of missile systems including Multi-Launch Rocket Systems (MLRS) and short-range antiballistic missile systems – Patriot and THAAD. It was a gigantic deal for Lockheed Martin and other branches of the US Imperial Military Industrial Complex. $13.5 billion dollars just for 7 THAAD batteries – wow, have you noticed how the US is talking up the ballistic missile threat in Yemen, Saudi, Japan, and South Korea? It’s almost as if there’s a marketing push to create a captive base of THAAD customers, isn’t it?

The US has also been providing direct military assistance for Saudi air strikes, including in-air refuelling and satellite reconnaissance. [stderr]

So, what is the US’ complaint?

It “might as well have had ‘Made in Iran’ stickers” on it, she [Nikki Haley] said, adding that Iran was violating UN resolutions.

Well, naturally! It would have been a trademark violation if someone had put “Lockheed Martin” stickers on it.

She added that it had the potential to kill hundreds of civilians, and that this highlighted the “undeniable fact that the Iranian regime’s behaviour is growing worse”.

“We must speak with one voice in exposing the regime for what it is – a threat to the peace and security of the whole world.”

Hang on, I have to go wrap some kevlar shock-batting around my irony meter, I’m afraid it’s going to explode and fill the room with shattered bits of glass and plastic. All you have to do is google search for “Saudi air strike yemen kill civilians” and you can see that the US is deeply concerned about civilians being killed.

This is exactly what ‘conservatives’ are complaining about when they talk about “moral relativism” – the idea that there’s no right or wrong, that actions must be judged neutrally. Moral relativism bothers authoritarians because it leads inevitably to questions like, “hey, if it’s OK when we do it to them, why is it wrong when they do it to us?” Authoritarians have problems answering that question – there’s really no good answer except, “we’re special.” 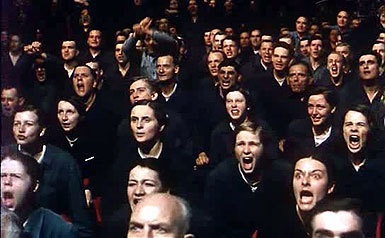 Meanwhile the Iranians seem to be pretty sensible:

Iran’s mission to the UN said the evidence was “fabricated” to serve a US agenda.

“These accusations seek also to cover up for the Saudi war crimes in Yemen, with US complicity,” a statement by the mission’s spokesman read.

Americans are expected to react to this news like the “Two Minutes of Hate” – conclude that Iran are the bad guys, beat the war-drums, scream with rage, throw the young imperial mercenaries into the fire to kill and die to protect Lockheed Martin’s profit margin.

If that rusty thing Haley is pointing at is a missile, it’s a piece of crap. For one thing, it looks like it’s steel – hence the rust. Proper missiles (like the ones Lockheed Martin sells!) are made of aluminum, carbon fiber, and ceramic. The poor Houthis can’t afford US-made stuff because they can’t sell oil on the open market. See how that works?

Counting Coup » « Good to Know They are On The Job