Someone over on facebook did an edit of a music video, and – in thoughtless and talentless homage – accidentally shat all over it. Don’t re-favorite it.

The video clip is of Prince and starts with the title “Prince shreds over Tom Petty.” See what I mean? 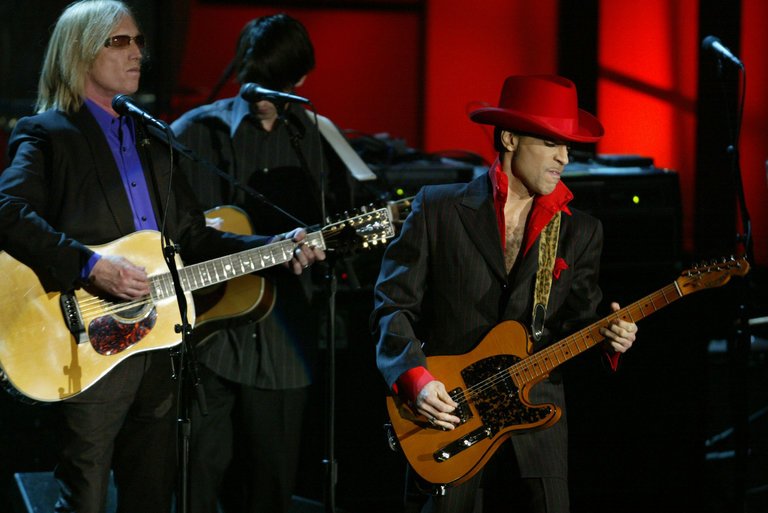 That performance is a great performance. It’s an epic performance. It is not merely some competitive bump in Prince’s path, it was a special moment for him, for the audience, and I dare say anyone who’s ever watched it. It was the kind of performance that anyone who was actually there will periodically brag to their friends, “I saw that live. I watched the St Crispians’ Shred.”

New York Times even had an article about how that performance happened. [nyt]

On March 15, 2004, George Harrison was posthumously inducted into the Rock and Roll Hall of Fame. As part of the ceremony, an all-star band performed “While My Guitar Gently Weeps,” Mr. Harrison’s best-known Beatles song. The group featured Tom Petty and two other members of the Heartbreakers, as well as Jeff Lynne, Steve Winwood, Dhani Harrison (George’s son) and Prince, himself an inductee that year. Marc Mann, a guitarist with Mr. Lynne’s band, played Eric Clapton’s memorable solo from the album version of the song. But Prince, who essentially stood in the dark for most of the performance, burned the stage to the ground at the song’s end.

That’s a good summary except “burned the stage to the ground” is faint praise.

The obvious thing – which is why I am ranting this ranty little rant – is to just watch the whole performance. Don’t worry, I’ll link to it at the bottom. The stories about how it happened are cool, and funny.

JOEL GALLEN (producer and director of the Rock and Roll Hall of Fame ceremony) My dream right from the start was, imagine if I can get everybody up onstage at the end of the night to do “While My Guitar Gently Weeps,” and Prince comes out and does the guitar solos. I wrote basically a personal letter to Prince, care of his lawyer.

I got a call from one of Prince’s guys, a week or two later, saying that Prince was in L.A. and he wanted to have a meeting with me. He said, “You know, I got your letter, I liked the idea, I’m going to listen to the song a few times, and I’ll get back to you.”

A couple weeks later his security guy called me again, and said, “Prince would like to meet with you again.” He said he definitely wants to do the song, he’s definitely going to do it. Both in the initial meeting and the second meeting, he did talk a lot about what we’re going to do with the music, who’s going to own the music — he was concerned like, if he does this, who’s going to own the performance? He wanted to make sure that his performance was not exploited without his knowledge.

It was never Prince “shredding over Tom Petty.” Like any other guitar master with a shred of comprehension, Tom Petty did not get competitive. Great musicians have this way of competing when they jam together, which is competing with themselves and each other to bring out the best. It’s win/win when that magic works and it’s lose/lose when some tired old Eric Clapton phones in a lackluster ‘jam’ in a benefit concert conga line.

TOM PETTY (shared lead vocals with Jeff Lynne on “While My Guitar Gently Weeps”) Olivia Harrison [George’s widow] asked me if I would come along and induct George. I was told, “Well, Prince is going to play too,” and I was like, “Wow, that’s fantastic.”

I just think, when I see that stupid facebook share, that someone actually went to the trouble to truncate that performance and try to re-frame it as competition, when all they needed to do was post a link to the whole thing, and let it scream and howl for itself.

That is the “mic drop” of all mic drops. I am endlessly amazed that the end happens so smoothly and perfectly that many people don’t even catch what happened. Prince was so amazing that he did something amazing and mis-directed the audience so they wouldn’t notice how amazing it was. That’s third-degree amazing.

Prince’s jam is showmanship of the highest order – it would be possible for someone who doesn’t even like rock and roll or guitars to go, “OK, yeah, that was pretty amazing.”

My St Crispians’ rock and roll moments: I was just 11, and we were coming back from France in the summer of 1973 via Icelandair, took a connecting taxi from Kennedy airport to 34th St Penn Station and got stuck in this insane crowd around Madison Sq Garden. We had to get out with our luggage and haul it to catch the late train to Baltimore. And I remember asking my dad “What is a ‘Led Zeppelin’?” Since it involved popular culture, dad naturally had no idea either, so we mushed on. Wish I’d gotten dad to buy me one of those T-shirts… The other time was in 1997 when I was raising $ for my startup, and had investor pitches to make in NYC. So I took the metroliner up in my dapper suit with my snappy metal briefcase and it was raining and I was wearing my old Burberry and my vintage Borsalino (yes, Le Samourai) – I had a 5 block walk over to the investment bank and cut across by Radio City and there was a fucking crowd blocking the sidewalk so I just shoved right the fuck through. I’m a New Yorker, after all. I broke through the other side and then I was thinking “WTF that gomer I told to ‘get the fuck out of my way’ was wearing a velvet fucking English schoolboy outfit?”