They have fought, the bravest, for thousands of years; their record of defeat and victory is mixed but they’ve stood with the desperate, charged gloriously to victory, and – like all warriors – humped gear from one place to another.

Not just the glorious ones in front of the charge, they served by pulling the great cannon of the Napoleonic wars through waist-deep mud as thick as glue. There are a few who we name: Bucephalus, Veillantif, Traveller, Marengo, Lisette – most of them, are unsung.

The horse is named Sir Briggs; he is shown carrying some English guy.

Shakespeare’s Richard III, in one moment of clarity, understood that the horse can make the king. They’re always there, though, where the glory is happening. We sing about the riders, not the horses that also charged, obediently, straight into the guns. I first began to wonder about the horses when I read about the battle of Hattin, how the crusader knights marched out stupidly into the heat of Palestine, and were obliterated by Saladin’s forces when their horses couldn’t carry them and their armor. I was about 13 at the time, and finally, I thought, “it must have been horrible to be a horse.” 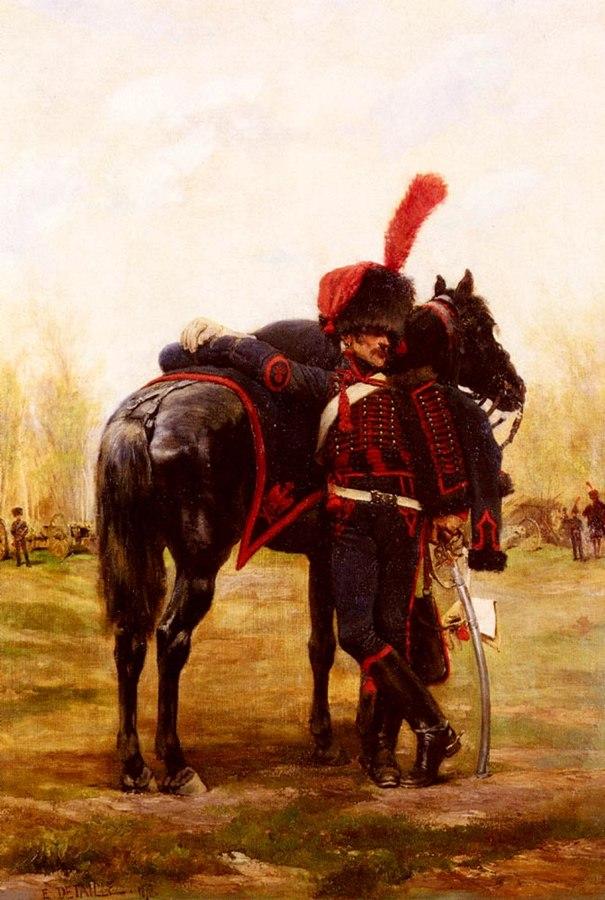 A great deal of military glory was won at great cost to the horses; they’re generally placid creatures, disinclined to charge into the face of artillery, or to march into the desert to be obliterated by storms of arrows. The horses I’ve known would prefer a nap in some sweet shady grass – it’s not the horses that come up with these desperate ideas, but they pay the price and they paid the price over and over and over for thousands of years. Their surprisingly delicate legs break easily, and they’re scared of being wounded. The great barrel chests that let them run or pull a cannon are big targets, easily pierced with arrow or artillery fragments; they don’t understand why they are suffering this, it’s not glory to them, it’s just what they’ve been asked to do. And they do it, because, I guess, horses have been bred not to ask – they’ve been bred to obey. Is that not the very essence of military glory, right there?

John Stuart Mill famously asked, “The question is not, Can they speak, nor Can they reason, but Can they suffer?” Every account of the glory of war includes the screams of horses; they get captured, ridden to death, ridden onto spear-points, their legs get hacked with swords to dismount the riders who are – don’t you know? – more valuable alive than dead. The horses? Not so much. “Dismounted” is a kind word humans use to describe when a warrior’s horse is killed under them – as if the horse wasn’t also a warrior worthy of mention. 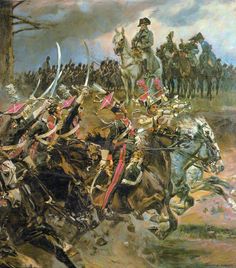 The Polish Lancers at Somo Sierra “Take me that, at the gallop!” ordered Napoleon

A horse’s instincts are mostly gentle; they’re lazy creatures. The horse I used to occasionally ask to carry me around, P-nut, grumbled all the time and was reluctant to move faster than a big, beautiful trot, except for that one time the bear stood up right next to him in the corn field.

Horses don’t get ideas like humans give them, yet the alliance between the warrior and the horse allowed them both to be much more than, well, the horses ever bargained for. The polish lancers charged into grape-shot at Somo Sierra, and the few shattered survivors of the battle were almost all dismounted – a few lancers survived and virtually none of the horses did. But the lancers were considered to be brave to the point of foolhardiness for succeeding in such an attack against all odds. The horses succeeded too, except they don’t get credit for it. At the Charge of The Light Brigade, 118 humans of 600 died, but 540 horses of 600 galloped off and never came back. That’s how military glory works, I suppose.

In a recent post, I commented that perhaps a statue of Robert E. Lee could be torn down and replaced with just a statue of his horse, Traveller. [stderr] The American civil war killed about 600,000 men on both sides, and over 1 million horses. World War I killed 8 million horses. Robert E. Lee supposedly fought doggedly and did his best for a lost cause; what did Traveller do? Traveller carried Lee’s plutocratic ass through the entire war, and afterward, and outlived Lee by a few months – dying, tragically, of tetanus from a nail he stepped on. Knowing, once the infection set in, what would happen to the horse, some kind veterinarian blew his brains out with a pistol. The great horses who stood through so much, are so fragile; they’re not really very good for war, they’re just convenient. They were also convenient food, when an army marching on its stomach screwed up and was freezing to death marching back from Moscow in the winter: they ate the horses. Napoleon’s grand attack on Russia killed so many horses that the entire European population was depleted for a decade.

Then there was Comanche. Comanche was the sole survivor of Custer’s foolhardy, genocidal, attack at Greasy Grass, which resulted in the entire force being wiped out except for Comanche. From the histories I’ve read, it wasn’t hard to be smarter than Custer, but Comanche did better than all the humans on his side – I assume by running away, which is what horses are built to do. There aren’t many monuments to horses; I wish there were more. They have come to epitomize, for me, the pointless waste of the human quest for military glory. 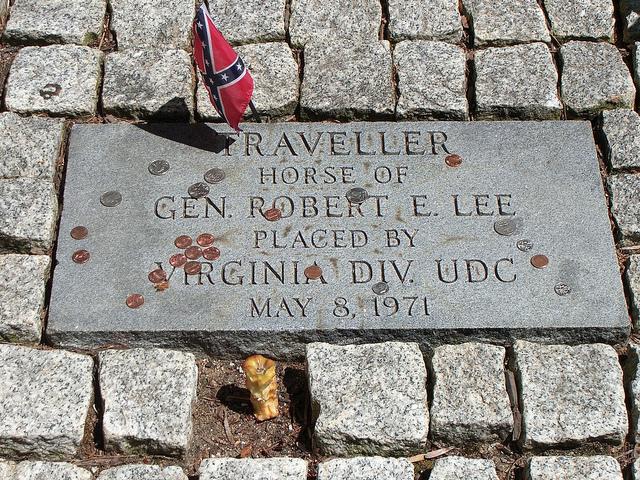 Traveller didn’t care about the confederate battle flag that some modern dipshit has placed on his grave. He probably cared, as horses do, for Lee; they went through a lot together. There must have been many times when Traveller was terrified of the things humans were doing, all around him, and he steadied himself and was still and brave because Lee, his human, asked him to be.

I’m glad we don’t ask as much of the horses as we used to. I doubt they miss the military glory.