It also cost more than should have, but it seemed like a good idea at the time.

One of my neighbors had a ne’er-do-well husband who ran an excavating service. That’s code for “guy with back hoe” who digs foundations for houses, grades roads, etc. There was some kind of problem with one of the local municipalities he used to contract for, and he was out of work so I had an idea that’d keep him busy for a couple of weeks and help put some coin in his pocket. 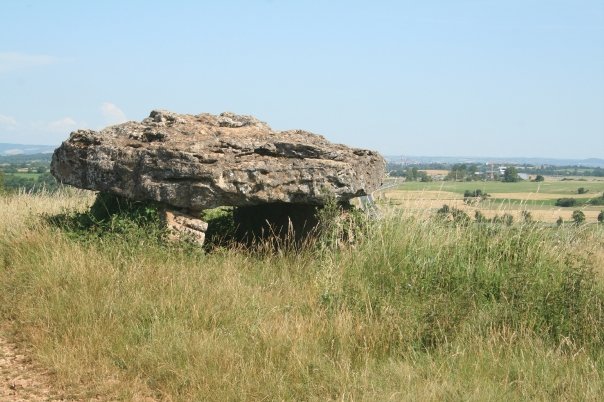 This is one of the dolmen from near my parents’ house in the Aveyron; about a 2 mile hike over the causses. I couldn’t find a picture of me and my sister playing on it, but they exist somewhere in my mom’s books of photos.

I spent my summers in the south of France in a region that was littered with dolmen and other standing stones, and I always thought that was a pretty cool thing. And, out here, in mining country, there are lots of big rocks. So I suggested Ralph go up to the open mine in Pottersdale with me, and we could pick out some good rocks, load ’em on a flatbed, and install them in my upper hay-field. He knew some of the guys at the mine so they told me to get the hell out of the way, and I did. I’ve seen tree-trunks flip a bobcat through the air, and I know rocks are heavy, some things are best left to the experts, etc. I’m pretty sure the conversation at the pit went something like this:

Ralph: “You are not going to believe this…”

Anyhow, the next day Ralph showed up with a gigantic Komatsu backhoe on a flatbed and then one of his friends from the mine showed up with a couple little rocks. “Little,” as in: 9 or 10 feet long, 3 feet wide, 2 feet thick – about 10-15 tons apiece. Out here in mining country, they move rocks like that pretty casually. I watched from a safe distance as they dug some holes, put chains around the rocks, and nudged them in. 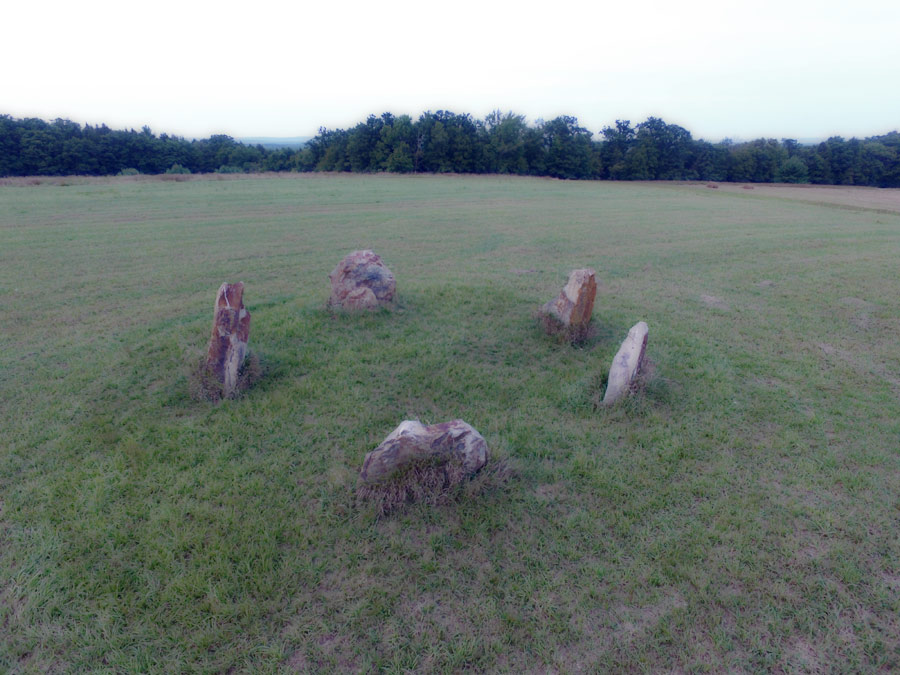 Frost heave is a real problem out here; or it was before the global warming really started to kick in. Apparently there’s a rule of thumb that says you should have as much rock below ground as above, more or less, so my 10 foot rocks are only 5 feet high on the surface. If, long after I’m gone, someone decides to remove them, they’re going to need high explosive. 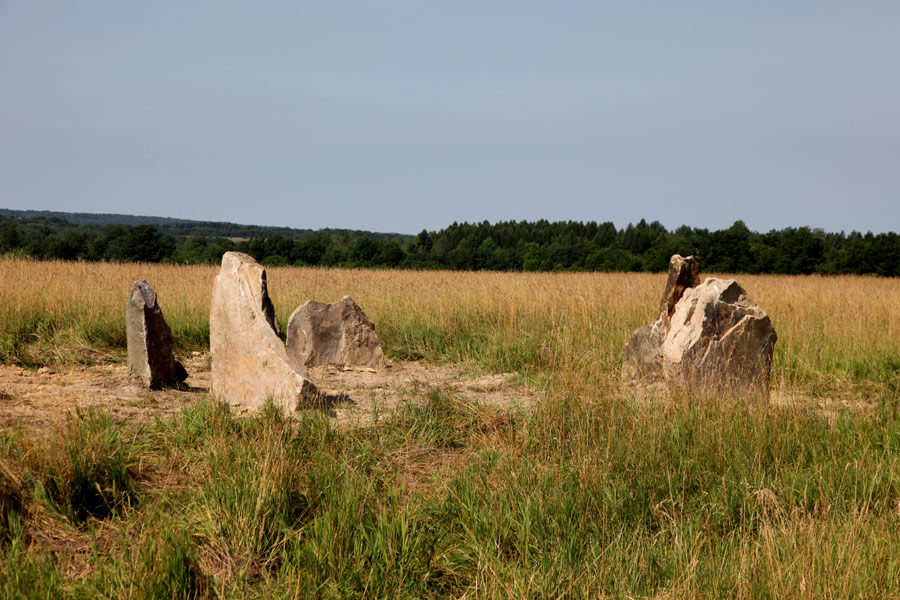 It’s convenient because I can date satellite images of my house based on whether or not the stones are there. It seems that the satellite image-runs update every 2-3 years, they show up on all the mapping apps, now. 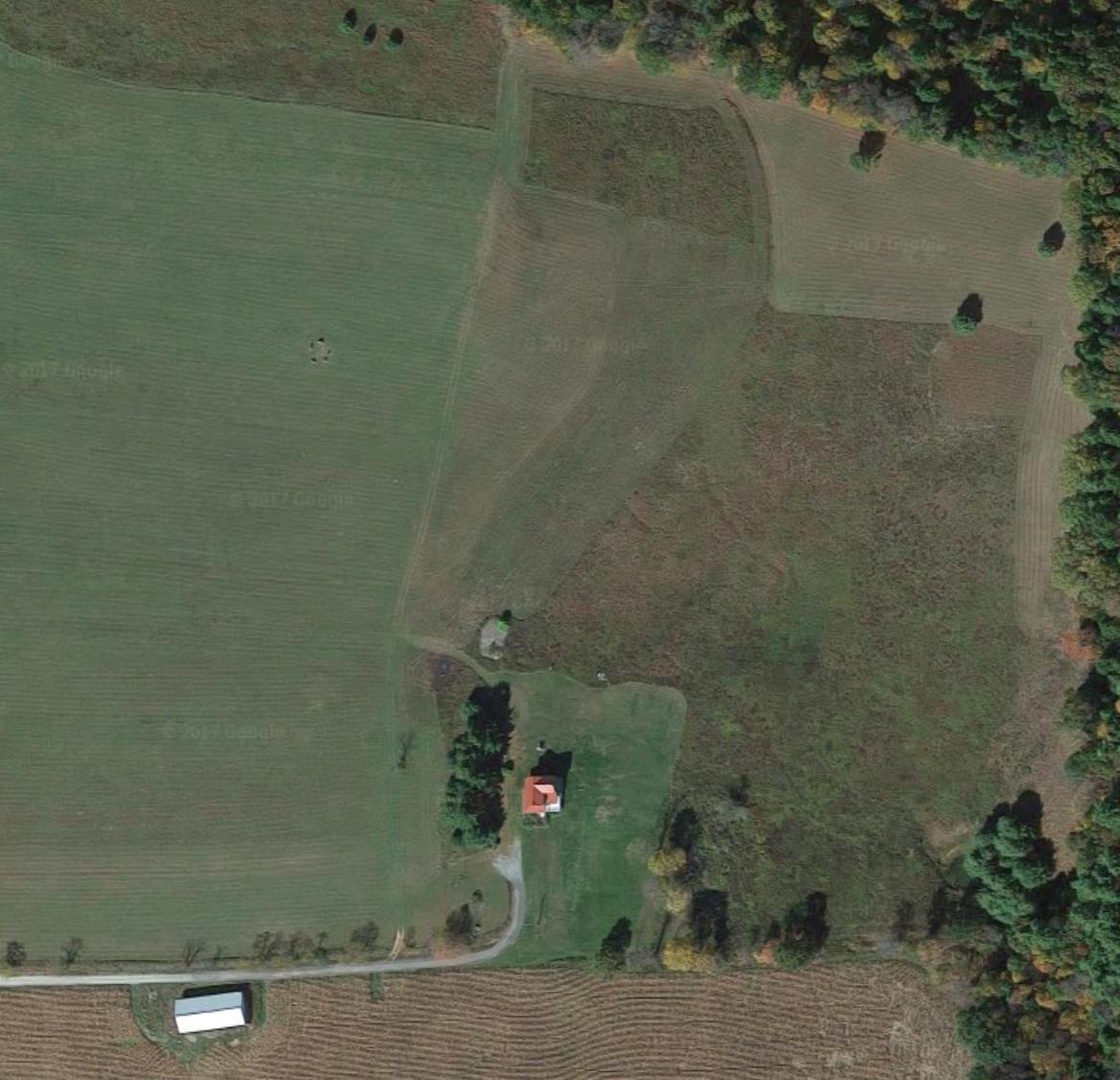 Since I’m not actually a witch or anything interesting like that, the stones generally sit out there unless someone wants a place to have a picnic. There’s a family of crows that have adopted it as their watch-tower – it’s a perfect place to sit and see everything in all directions, and to poop.

Back in 2012, I had the idea of posting a stock image using the stones but it didn’t really work out. The whole shot turned into a bit of a mess, really. My mental image was of a snow-swept landscape, with these standing stones and snow whirling around them, and there are footprints in the snow and blood, and some dude in a celtic tunic and breeks, with a bloody sword, his back to one of the stones. Sort of “a bad day at the office” viking-style. It was supposed to snow the next day so I thought I’d be ready and I had my camera rigged on the timer and tripod, other stuff staged on the porch ready to go. It turned out the weather and light were just what I envisioned. So, I set the camera on a 1 second fire cycle, costumed up, began leaking stage blood down my arm and staggering toward the stones through the snow. Right about then, the stage blood froze my hand to the hilt of my viking sword (solid steel, good thermal mass) and I couldn’t feel my feet and hands. I had my glasses off, of course, and could barely see where I was going in the general unpleasantness that was going on and all I could think was how miserable an experience this would be if it were real. It was around 5 degrees F. 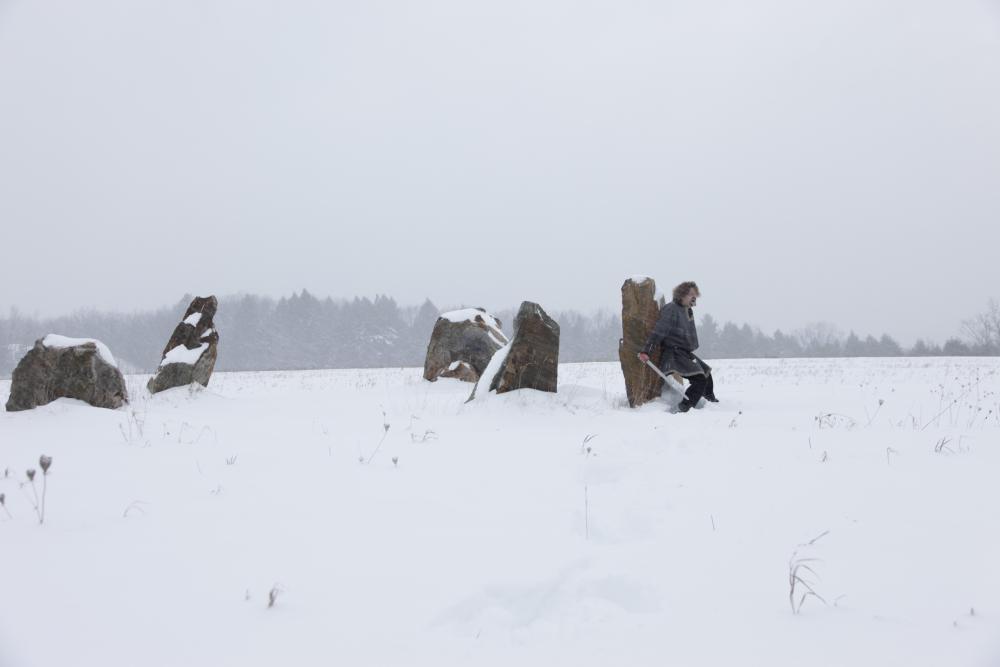 I clowned around a bit then headed back. It was snowing so hard that the bloody tracks were already drifting over, and I had to run warm water on my hand to get the sword loose.

My parents left me a lot of leeway as a kid, and I used to wander great distances alone under the stars in the south of France. In the day I’d take a canteen of lemon water and a stack of books, and at night I’d take a sketchbook and walking-stick, which my imagination turned into a sword, or a wizard’s staff, or whatever else I needed. One full moon night I was up on the mesa about midway between home and the dolmen, and I decided to visit the dolmen, so I did. I’m not superstitious and I’ve always been an atheist but I got to the dolmen and was thinking about barrow-wights, and I believe I had just finished reading Alan Garner’s Weirdstone of Brisingamen for the umpteenth time – by the time I got to the dolmen I was subconsciously primed to scare the shit out of myself. I still don’t know what manner of little critter it was that was living under the dolmen that night, but when I sat down on the edge of the top rock, there was a scuttling and a little “chirrrrrrrr…..” sound from somewhere behind me. I was a runner, then, as a kid, and I was home in 15 minutes; I was parkour’ing down the vineyard walls and cutting across fences and jumping hedge-rows like there was a revenant chasing me. Stop and look behind me? No way! It was gaining on me.

Yeah, there’s also a dolmen in my yard. But that’s another story.

Sunday Sermon: Military Glory – The Bravest of Them All » « The Hardcore of Yore: Mary Sherman Morgan