By now, everyone should know Joe Arpaio is an inflamed buttpimple. One of his lesser-known blunders was using the federal military surplus program to build an appropriate monument to his vanity. 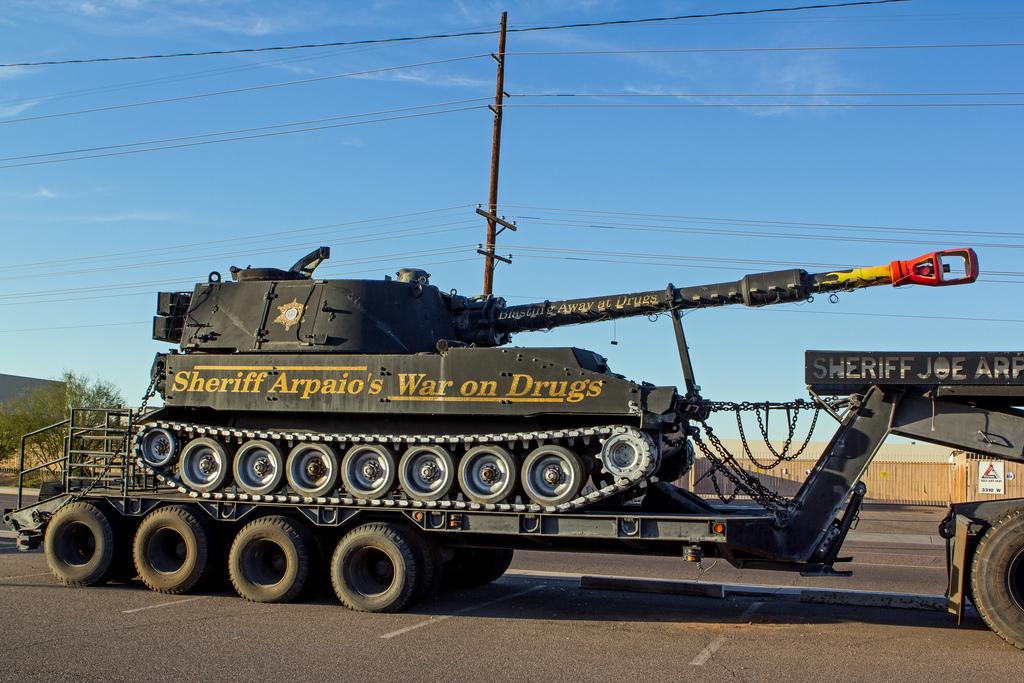 Nothing says “I am a badass motherfucker” like a 155mm self-propelled howitzer bedecked with christmas lights with a big piece of rebar welded into the end of the barrel.

“What are you going to do with that, throw it at me?” comes to mind.
There is something emblematic, however, in the “war on drugs” being represented through a demilitarized 27 ton paper-weight.

Maricopa County Sheriff’s Office did the only thing that made any sense: they gave it back to the DoD. [12news]

The sheriff’s office had displayed the enormous war machine from its flatbed tractor-trailer for parades and community events since MCSO acquired it in 1999. It was incorrectly referred to as a “tank.”

The howitzer was not fully militarized or battle-functional while in MCSO’s possession.

By 2017, the tires and wheels of the trailer had deteriorated to a point where the trailer was essentially grounded in a parking lot, MCSO said. That’s when the sheriff’s office decided the howitzer had to go.

“Replacement tires for what had essentially become a museum piece with no practical application to law enforcement would have again cost Maricopa County taxpayers tens of thousands of dollars better spent on public safety,” the sheriff’s office said in a release.

The Department of Defense agreed to take the howitzer back at no cost to the sheriff’s office.

It took four hours to move the 27-ton vehicle from its trailer to the Arizona National Guard’s flatbed truck.

The ‘surplus military gear’ program that Obama stopped is being restarted by Trump, naturally, because anything Obama did must be undone to make America Great Again.

There’s a point hidden in all this: military gear is expensive to maintain; merely having it sitting around is expensive. Especially if you don’t know how to handle it. (Hint to MCSO: you should have taken the wheels off the flatbed and filled them with concrete if you were making a permanent installation) One does not merely find parts for a 1960s howitzer on Ebay in order to repair it. And: why would you want to be able to drive it around, anyway?

Jurisdictions led by blockheads around the country are bleeding cash trying to deal with rusting, obsolete military gear: [mj]

An officer with the Chelan County Sheriff’s Department in central Washington is offering me a tank. Three of them, actually.

“We really want to get rid of these,” Undersheriff John Wisemore says. “We’ve been trying to get the military to take them back since 2004.”

The tanks came from a vast Defense Department program that has furnished American police arsenals, at no charge, with $4.3 billion worth of combat equipment leftover from two foreign wars. The tanks are amphibious, capable of firing 107-mm mortars – and not remotely useful to Wisemore’s rural police department. But the county can’t seem to unload them. Back in June, Wisemore got an email from a Defense Department liaison promising to explain how Chelan County can get rid of the tanks. Then, nothing. Until further notice, Wisemore says, “they’re just going to sit there.”

Armored vehicles gas mileage is usually down in the sub- 1 gallon/mile range. They are uncomfortable (cops: take note!) and lack cup holders.

They are also not scary. The only thing that’s scary about any of this stuff is that it demonstrates how stupid many American Police are.

LA School Police has decided to return some gear: [latimes]

The Los Angeles School Police Department, which serves the nation’s second-largest school system, will return three grenade launchers but intends to keep 61 rifles and a Mine Resistant Ambush Protected armored vehicle it received through the program.

Grenade Launchers? Do they expect the 8th grade homeroom class to need a bit of 40mm frag? The students were cutting up in the back of the classroom so we gave them the ‘ol whiff of grapeshot?

Another hidden cost in all this military gear is training. One of the reasons that cops are so dangerous with military gear is because they generally (unless they are veterans) have no practice with it. Or, worse, when they do, sometimes they treat it like its a toy. I can’t find a reference for it on the web, but I remember a Maryland police department that had a bit of a problem explaining how they had shot of $150,000 worth of 9mm ammunition ‘testing’ a sub-machine gun they had seized from a drug dealer.

Come to think of it a 27-ton dead-weight perched on a bunch of flat tires… It kinda works as a monument to Arpaio.

“That’s when the sheriff’s office decided the howitzer had to go.” – damn, they sure are slow learners.

The Hardcore of Yore: Mary Sherman Morgan » « Imagine My Surprise!