A friend of mine made me watch this; I had had too much wine, perhaps, and really couldn’t believe I was seeing what I was seeing.

If you watch the video below, I am not responsible for any WTF damage you may suffer.

Youtuber SuperDeluxe does some really interesting and creative edits, that – in my experience – don’t interfere with the content. They delicately amplify the WTF that is already there.

At 0:30 you get a glimpse of Bakker’s new grift: end-times survival food buckets. Each bucket holds 90 days worth of semi-edible sludge that you can stack in your living room and use as a coffee-table so that when everything falls apart something something uh I am not really sure what the exact idea is. But it has a 20-year shelf life. If I had 20 years of remaining shelf-life I’d buy one and store it and measure the bacterial content in 20 years. Actually, I’m kidding about that. I might, however, strap a politician to a water-board and give them a few ladles-full to see what happened to them, in the name of ‘enhanced voter feedback.’

Bakker’s got a new mannequin covered in mascara and face-lift; I guess we can all be happy for him, or something.

The whole show is horrifying at many levels (and SuperDeluxe helps bring it out) – there are some amazing bits at 1:50, “half of our kids are full-blooded Mexican kids, and you can see they like it!” as they feed a bit of unidentifiable taco-glarp to a baby. I’m not sure what bothers me more, the casual racism or the stupidity of assuming that taste in food is hereditary – does he think he’s some kind of evolutionary psychologist, or something?

At 2:30 is a bit that’ll have you laughing so hard your survival food will spew all over your keyboard: the glossy-skinned over-manicured evangelical talking head says, “One thing that is great about Donald Trump is he does not lie.” 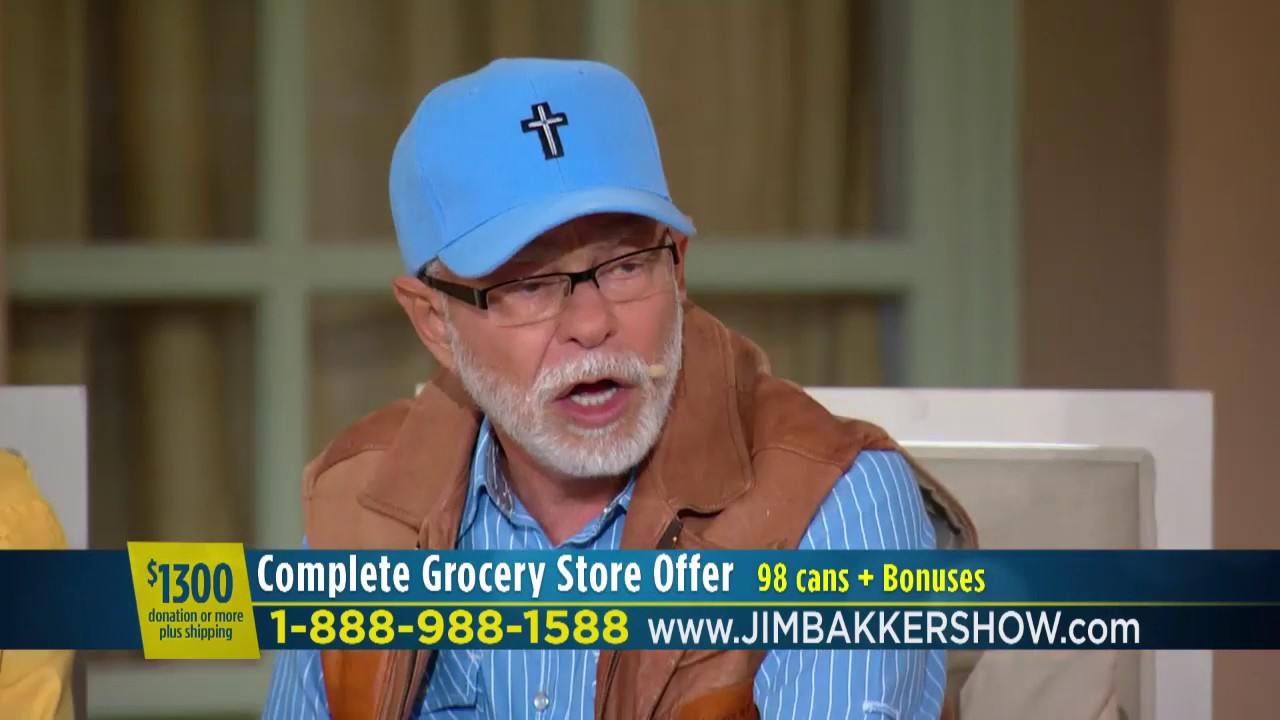 Joking and fun aside: his audience are some of the trumpenproletariat. They’re the authoritarian followers who believe pretty much whatever they hear, as long as it’s said with a tone of confidence and enthusiasm. How could that nice man Jim Bakker be a liar? He even went to jail for his beliefs! In another episode of Bakker (I watched a bunch of this shit, so you don’t have to) Bakker appears in a ball cap and work clothes – he’s just folks, people, just one like you – not a mega-church pastor who rakes in millions of dollars a year selling crap to ignorant religion-addled rubes.

Spoiler alert: at 2:50 we are shown how the survival food bucket can be outfitted with a toilet seat so it makes a good emergency commode. Because, I guess, when the end times come there won’t be dirt or holes left. They missed a trick, though – they should have included a peel-off sticker that says “FOOD” which you can peel away and reveal “POOP” so that people can tell them apart. They look too much alike.

One of my blogger fantasies, before I became part of the FtB hive-mind, was to find a couple of really really good writers and set up a blog that purported to be Voltaire and Mark Twain’s blog. I’ve always thought that if those two characters could somehow be resurrected in this time, they’d have some particularly fine, dry, commentary to offer. I would not dare to write a blog under the nom de plume of one of the greatest men of letters who ever lived, I can’t play at that level, but I sure would love to read it.

I note that the difference between “FOOD” and “POOP” is a small curve and a short line. So Bakker could save on stickers by just giving us a holy magic marker or something. Praise be!