Ever since I was a kid, I’ve loved the magic of movies. There was a long time when I wanted to go into SFX (specifically, to wrangle weaponry for movies, after seeing so many stupid ray guns and anachronisms, like sterling 9mm submachineguns firing blaster bolts or MG42 ‘smart gun’ pulse rifles – and don’t even get me started on mis-balanced swords!) I started buying Cinefex when it first came out and only stopped when the pile got too heavy to move.

Movies are magic. So, you can imagine me squeeing long and hard when I got a chance to wander around the back lot at a major Hollywood studio.

One thing that’s surprising is how huge and how small it is. There are city streets, but the buildings are only a few feet deep. Usually, they are empty of details, but the night before a shoot a small army of people are out there adding trash cans, period appropriate door knobs and signs, cars, trash, etc. 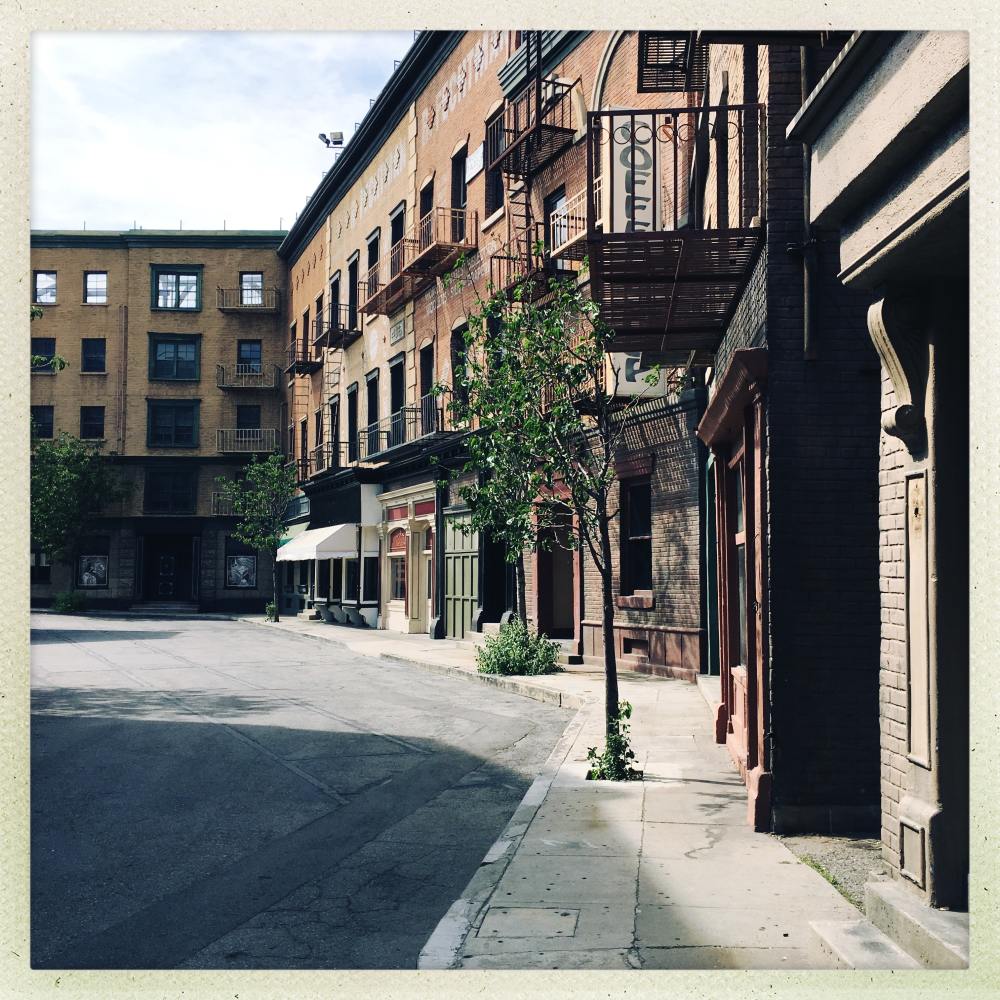 See all the holes in the sidewalk? You might have a mailbox there one day, or a noodle stand the next. These are the streets where Blade Runner was shot. If you turn 180degrees, the inverted kiss scene from Spiderman was done from the fire escape. It’s simultaneously big, yet tight. I don’t know any other way to describe it. The buildings are real enough that you can run up the stairs and in the door and close it and other than that, the rooms are mostly for turning lights on and off, then it’s “cut” and the rest of the scene is shot in an indoor set. 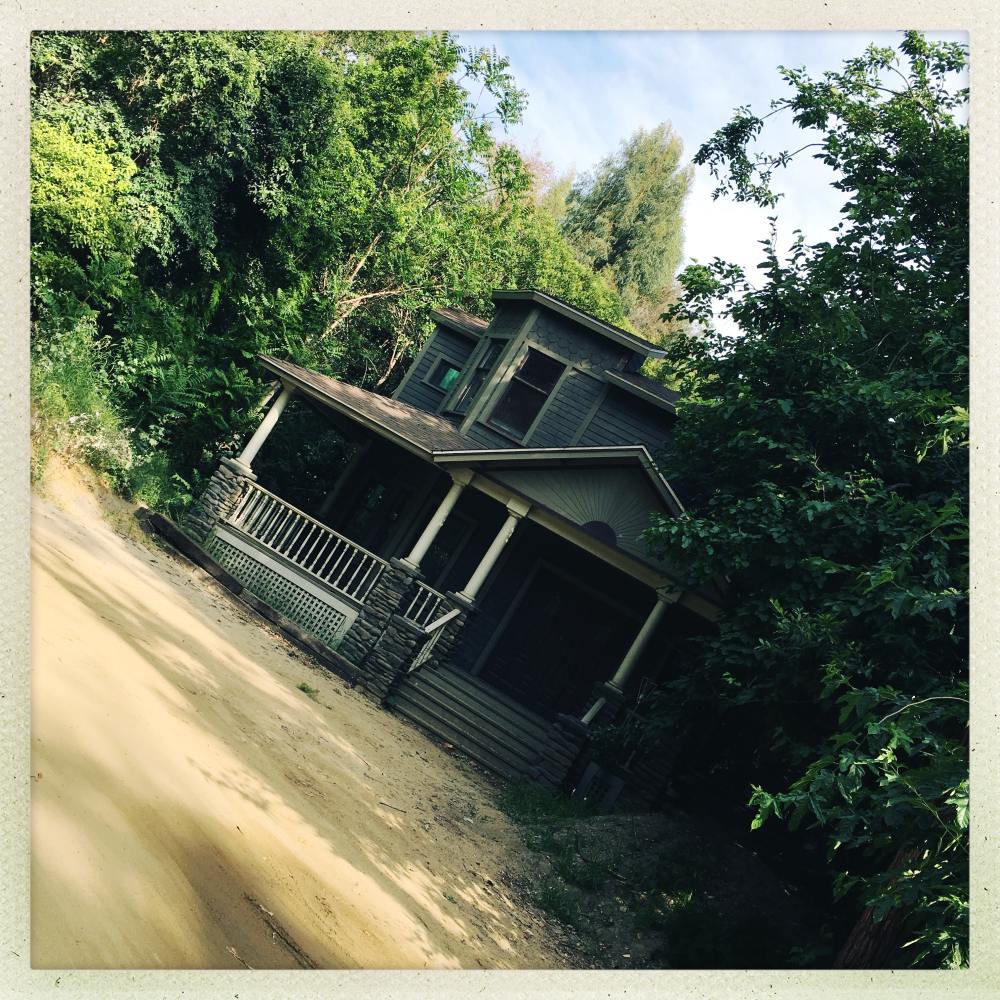 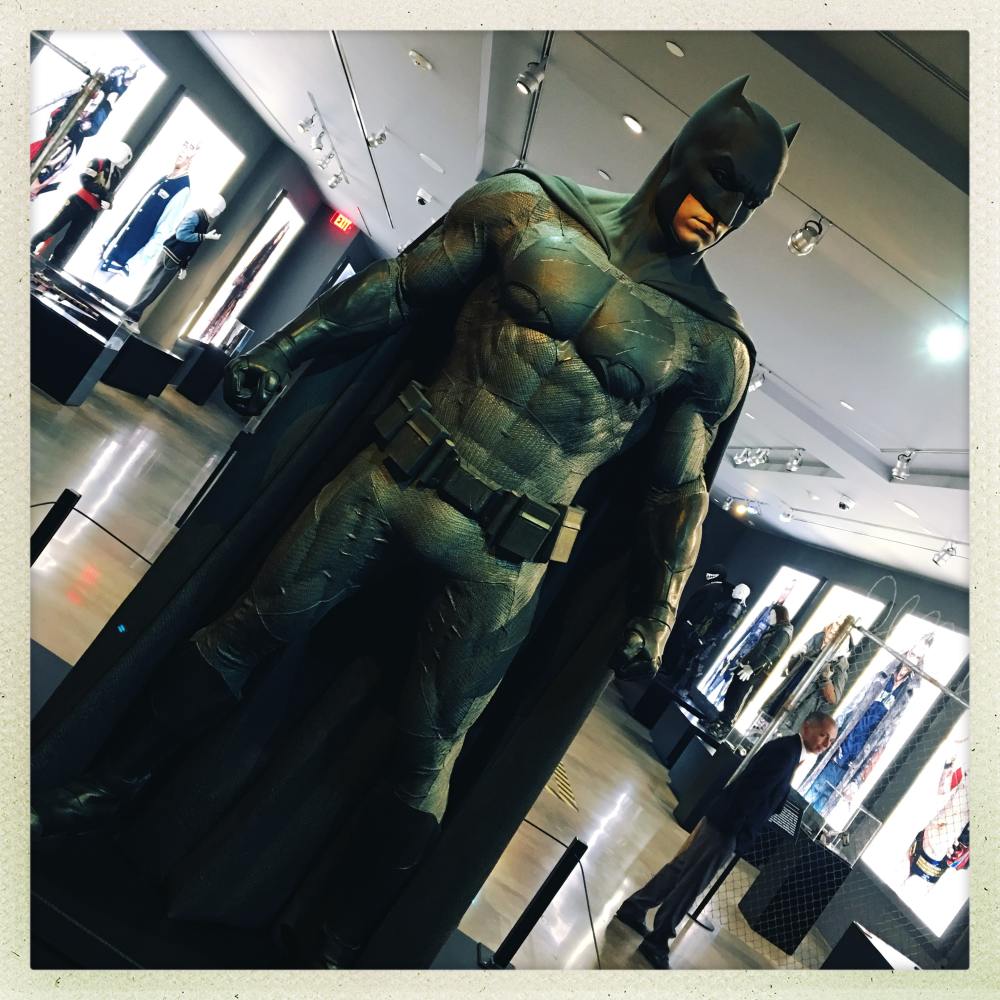 One of the things I loved about the place is that people who work there are completely head over heels in love with what they are doing. They are making magic and they know it – and some of the iconography of certain movies is unforgettable and distinctive. And the people who made it are justifiably proud of it, and want to preserve it – so there’s kind of a museum-like air to parts of it. It was amazing to be able to stick my face a few inches from Batman’s suit and admire the way the cloth texture is in the silicone, which was presumably molded from a clay original. 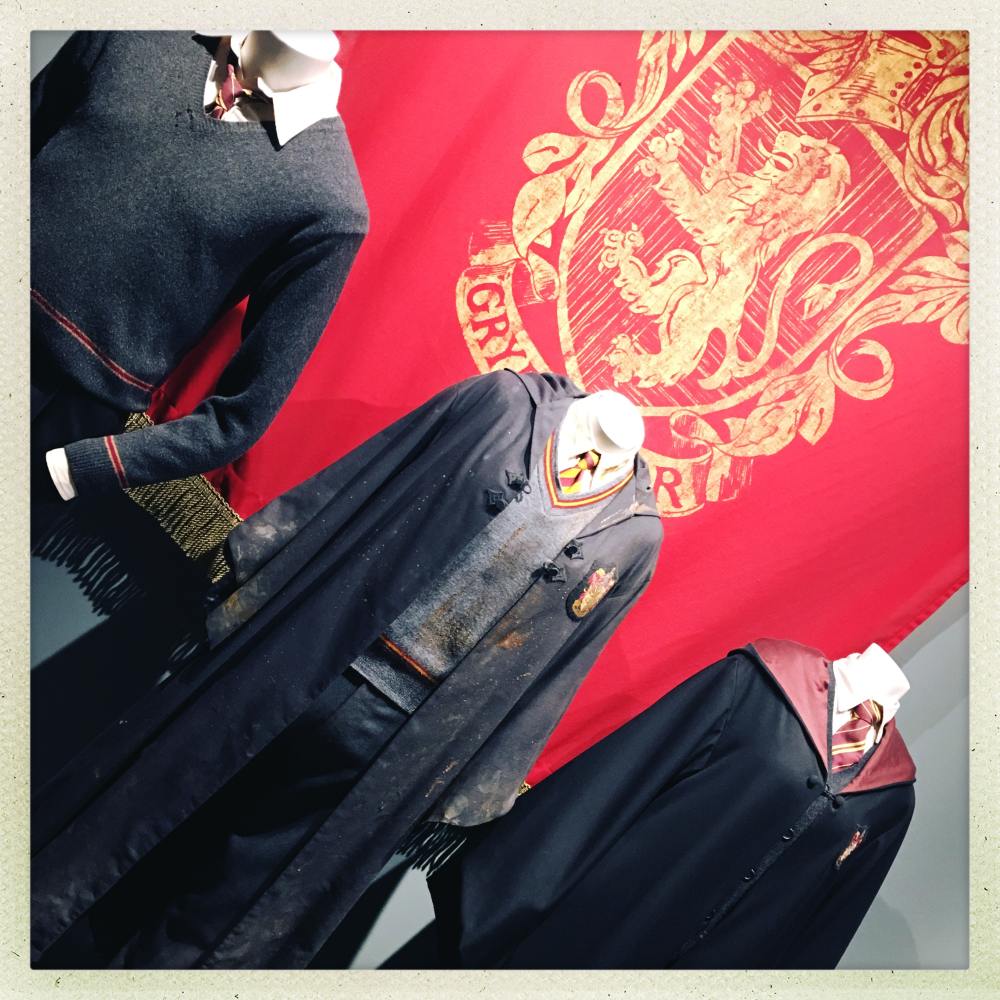 I love costumes and it’s gratifying and heartwarming to see that the people who make the costumes for these magical shows do, too. There’s also a lot of recycling. The big stages are used over and over in different ways. Some stuff gets kept, some stuff doesn’t. There are warehouses I was not allowed into, where everything is tagged by the show it’s been used in, so if they ever need “that lamp that was in episode 4 of season 2 of Friends” a prop warehouse probably has it, and that lamp probably also appeared in SpiderMan but the camera panned by it so fast it didn’t matter. 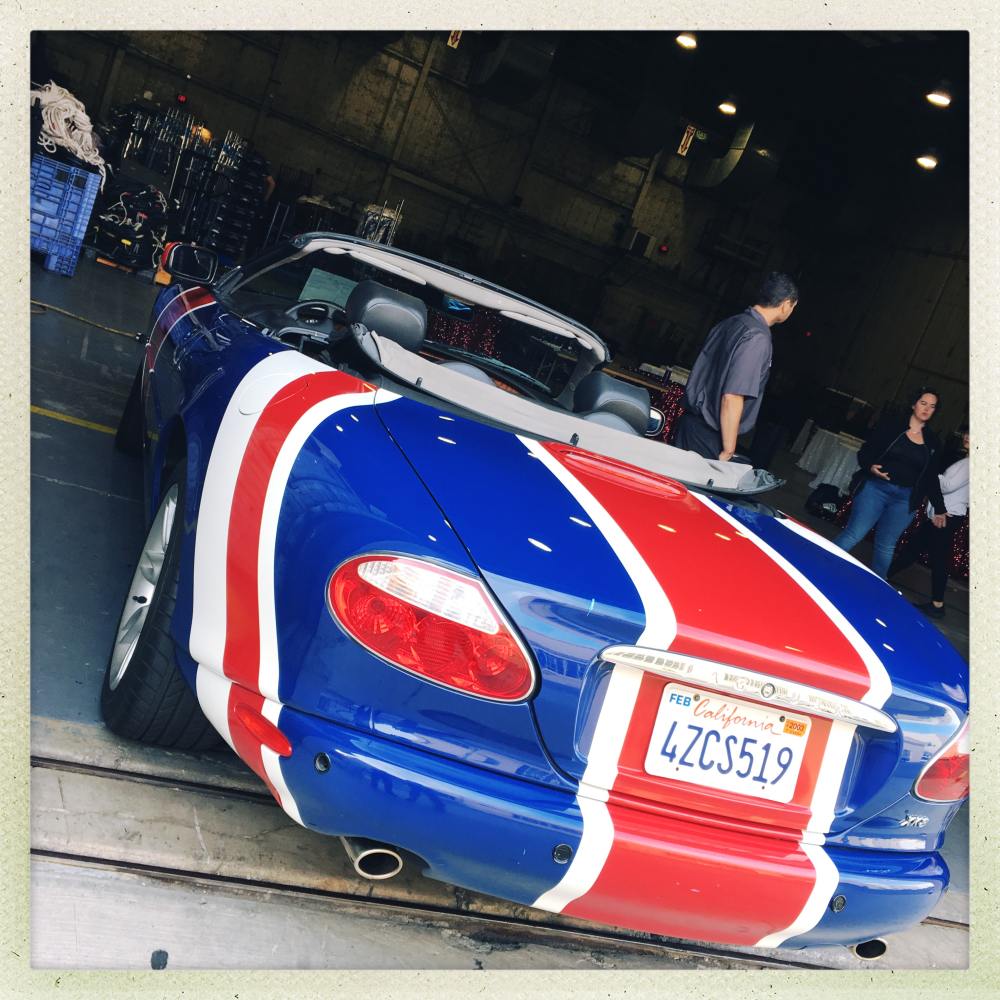 There was some kind of event going on, so they had rolled out the Shaguar. Several people were doing selfies in it (who wouldn’t?!) (I wasn’t invited, so I tried to act cool, not gawk, and walk on)   Though I’ll say one of the things that’s cool about movie magic-land: gawking is OK. The idea of movie magic is to make you gawk. It’s a compliment to the artists that create these wonderful visions of awesome, that we stop and stare. 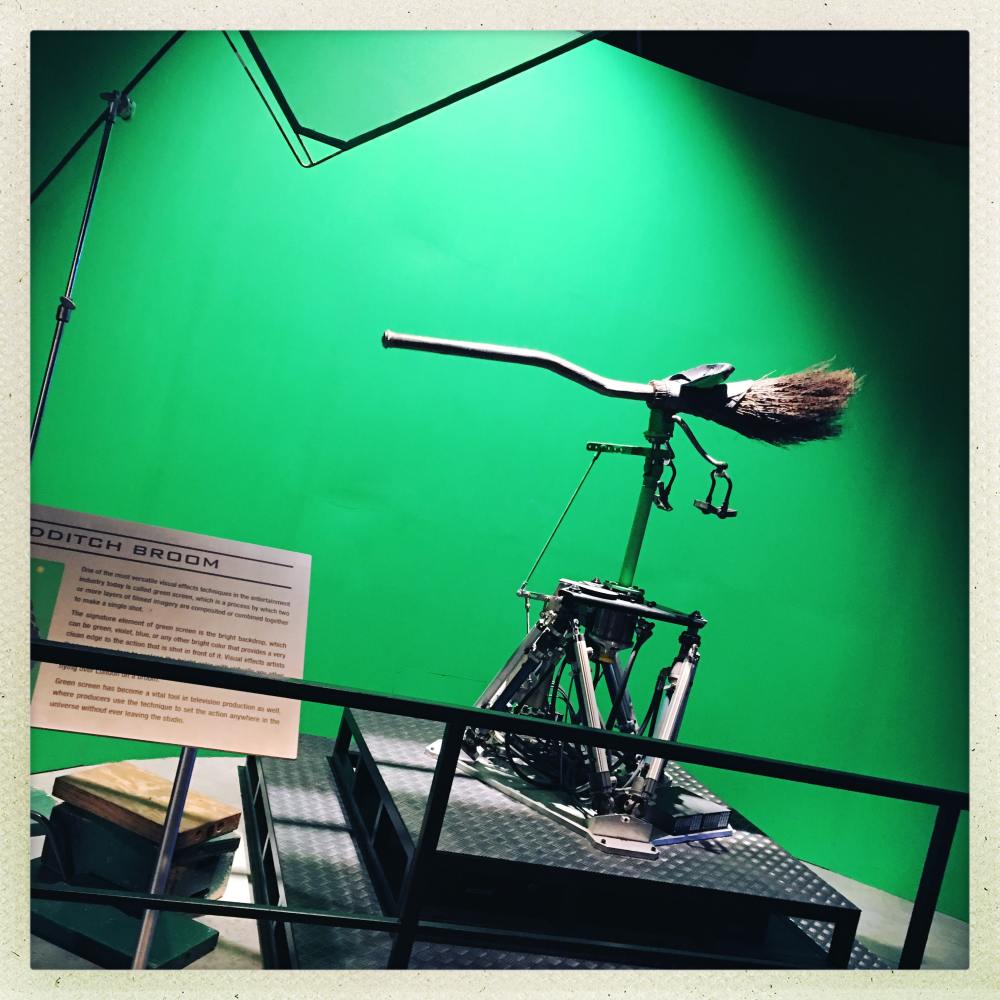 There is a museum that is pretty much the Museum of Awesome. Some props are so rare and unique that they’re off limits. For example, in one glass case was the zeppelin from Blade Runner – you could look around the back and see how it’s held together with hot glue. Somehow that doesn’t reduce the magic: realizing that this 3 foot-long model was that huge believable zeppelin – the magic intensifies.

There’s one piece of a soundstage where a little museum of a very special sort has been marked out: 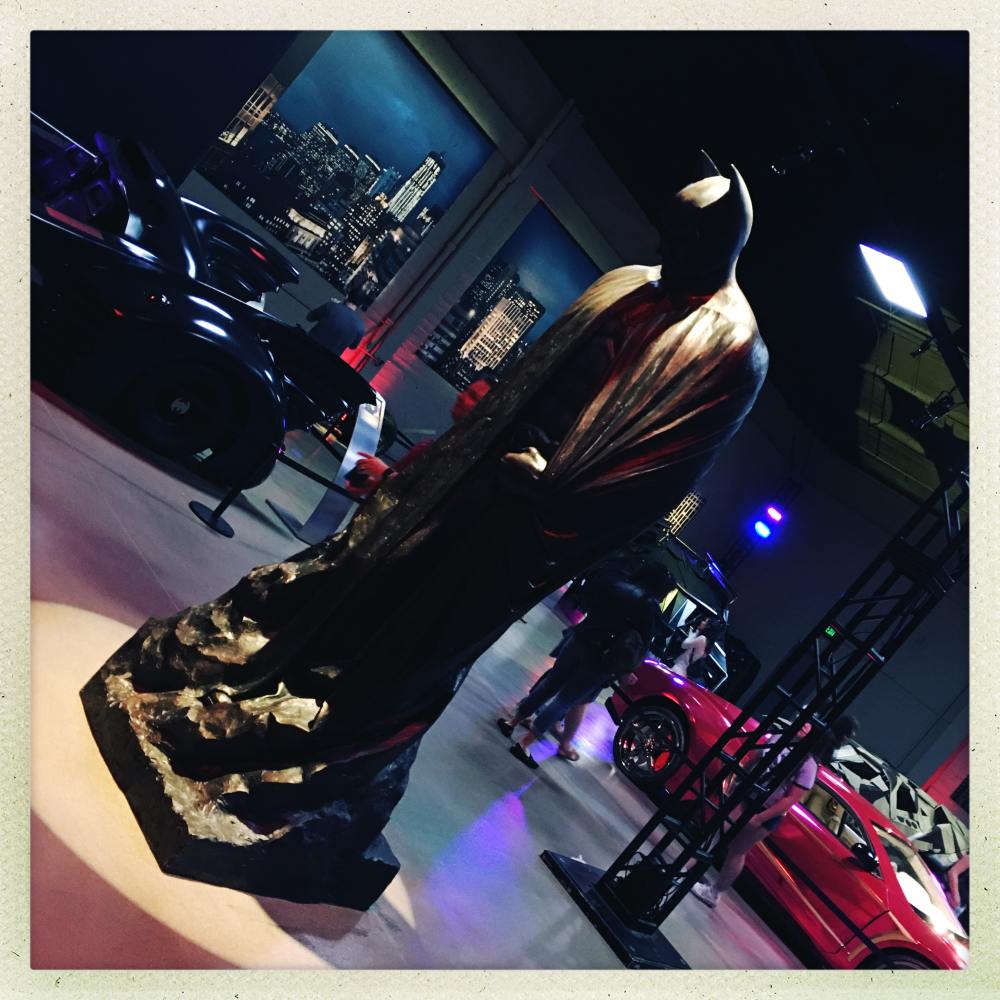 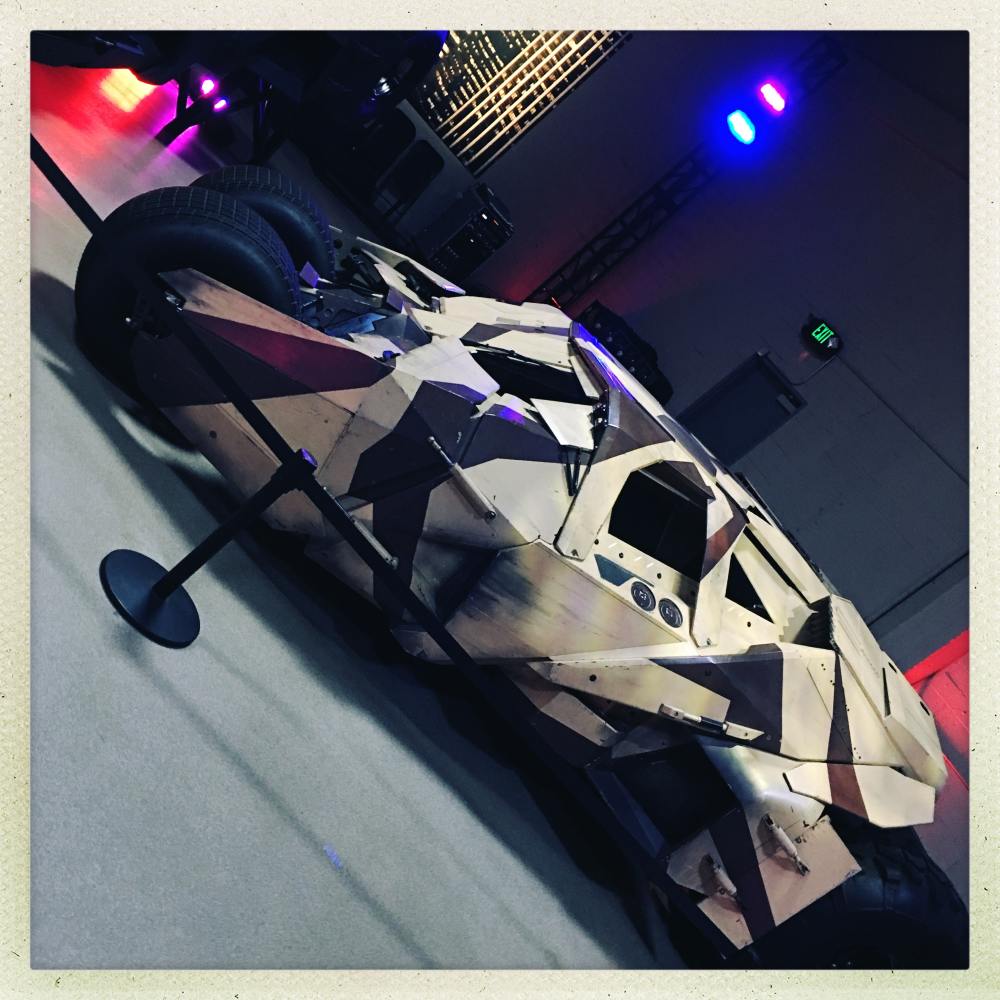 And, when you’re a movie studio, and you’ve got artists all over the place, why not have a big statue of The Batman standing in the middle of the collection? I’ve met a few Hollywood prop artists – one guy who can take clay and squish it into anything, seemingly instantly. I’d be surprised if he couldn’t model the basics of a Batman statue in a long weekend. Think about it! Think about how much artistic talent there is just walking around in that 100 acre area!! It’s humbling. There’s a costume department that did Batman, Suicide Squad (the costumes were great. The rest… eh)  Harry Potter, Blade Runner, Mars Attacks, Austin Powers, and – yeah – Friends and True Blood too. 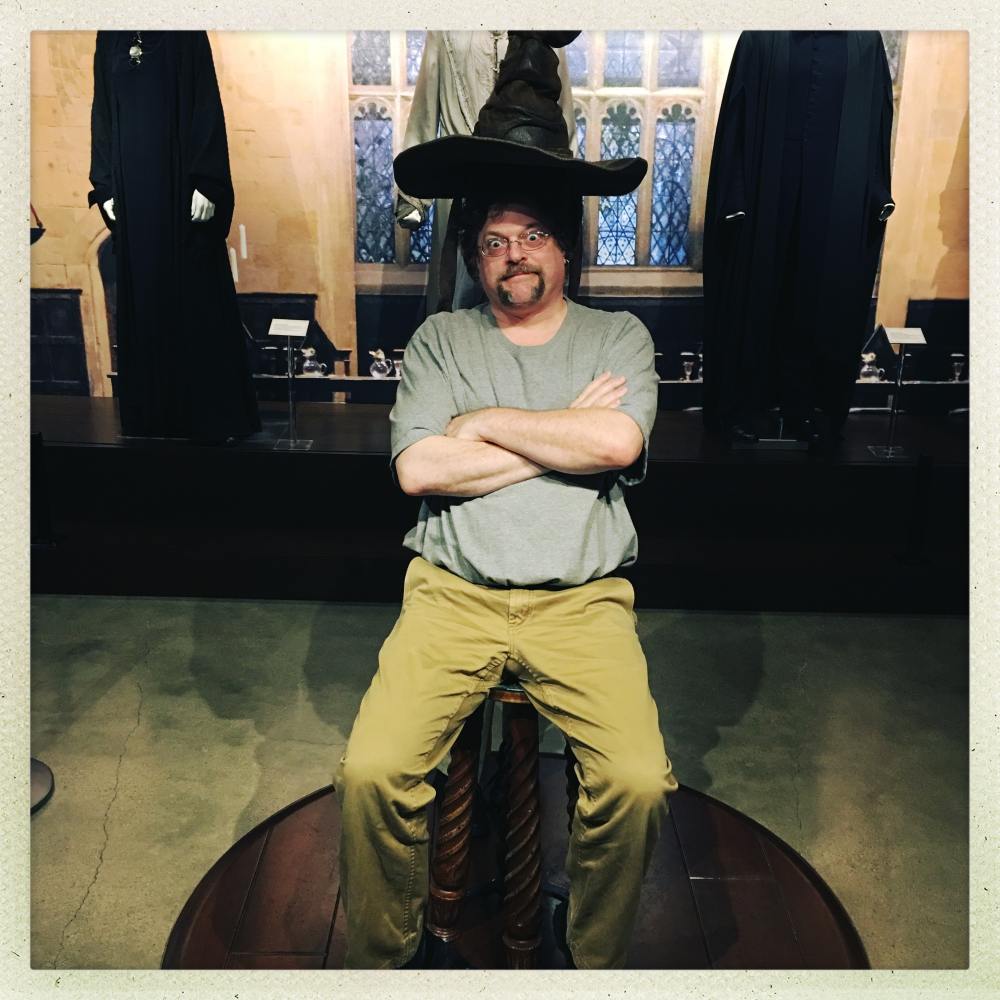 I’m told that’s Severus Snape’s robes over my left shoulder. The hat is not the hat, it’s a copy they made (“hey, Fred? Can you make us a couple spares of that hat you did?”) 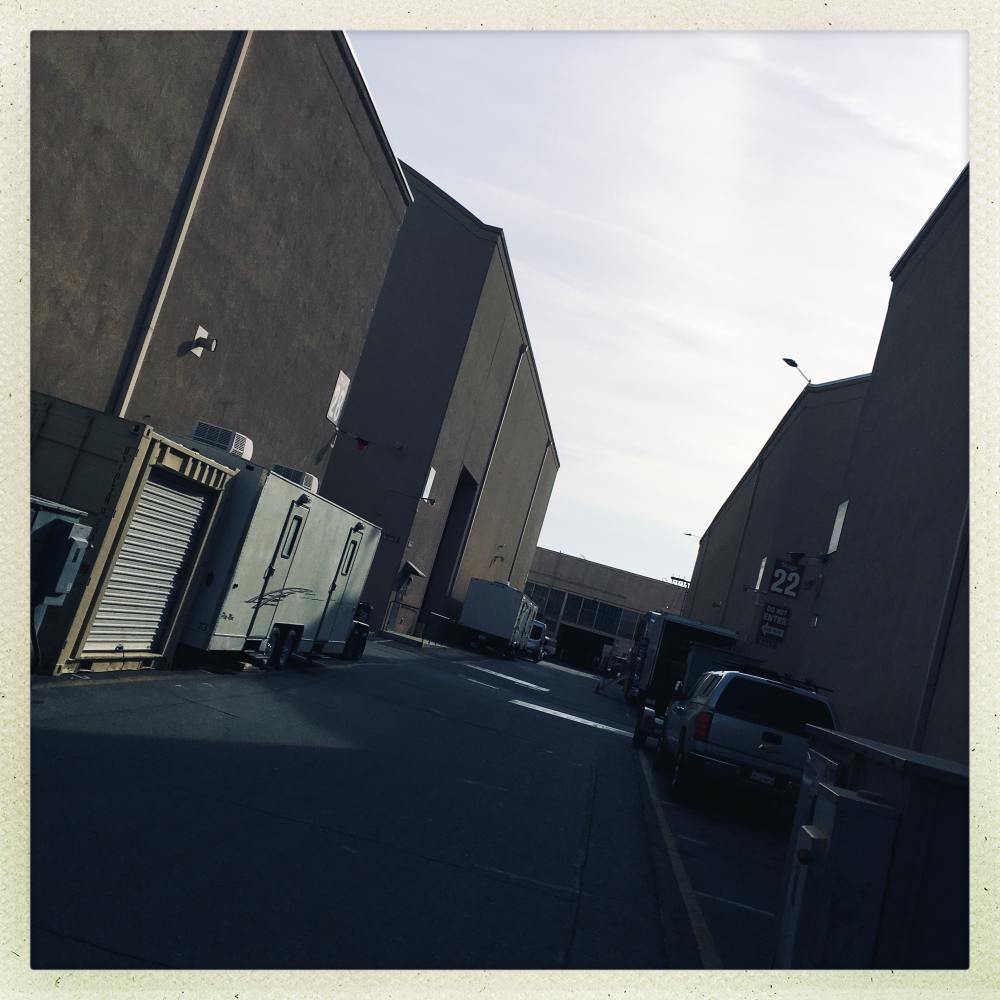 I nearly fainted with joy wandering through the metal-shop and carpentry shops, where they shoot together flats – collapsible room walls – that can be assembled quickly to make a full set of something. Like the coffee bar from Friends. 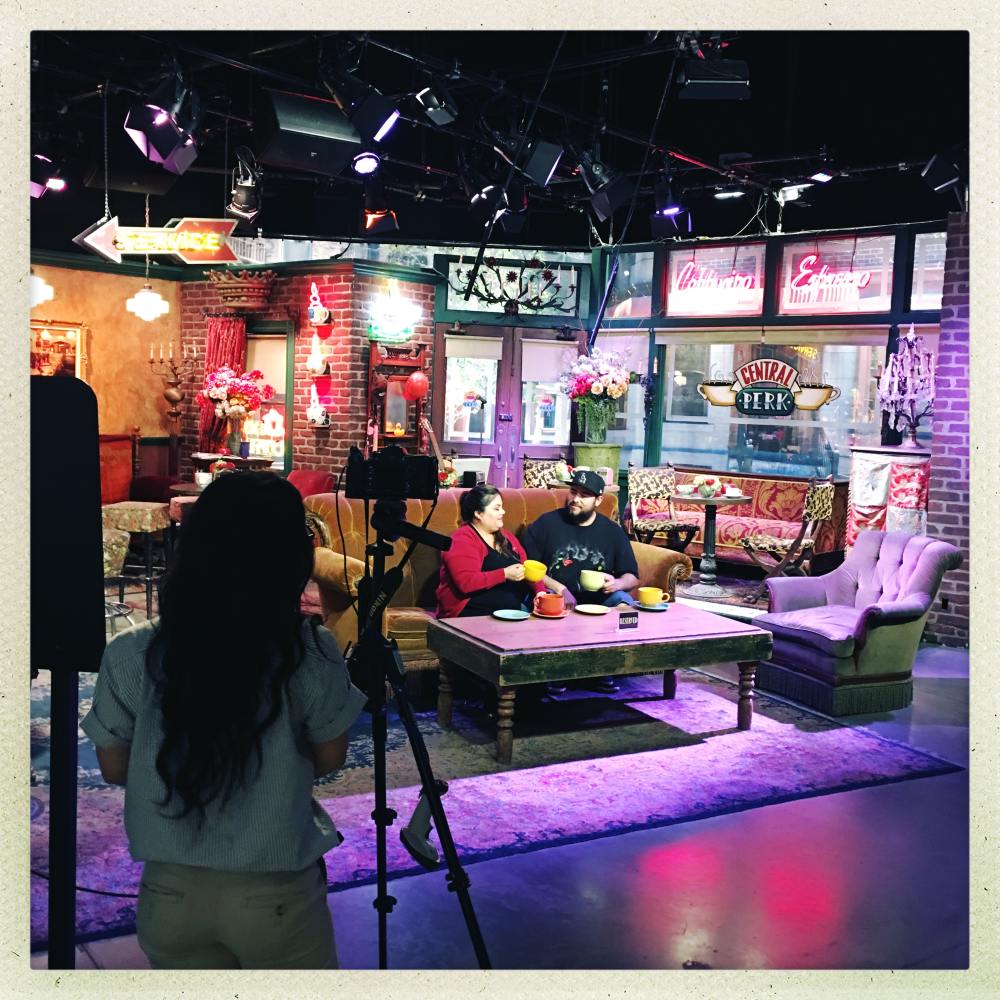 See what I mean? It’s magic. 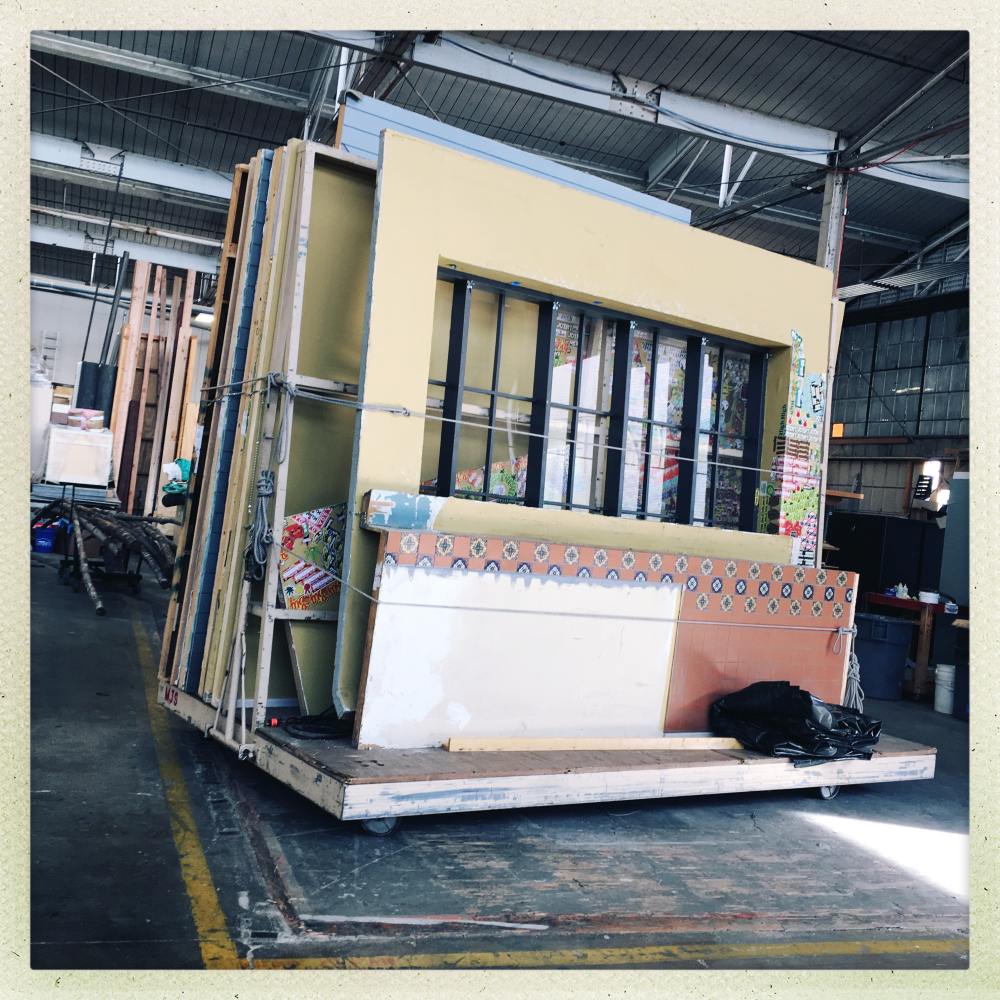 It is, officially, the coolest closet I’ve ever been in. I wasn’t authorized to go down there, but apparently the costume warehouse is a couple floors below ground, with everything indexed and cataloged in a computer. You want a pirate outfit? The “heroic” stuff (that’s: stuff that a hero character wears in camera closeups) is all special-made, but for the background characters, they just pull stuff out of the basement.

It’s where magic happens every day.

In the picture of the Shaguar, don’t worry, that’s not bird poop on the trunk; it’s the reflection of the interior lights that you can’t see from the angle of the camera. When I was looking at it the first time I was outraged, “what pigeon would poop on the Shaguar!?!?!”

One other thing I love: the stuff’s not all in glass cases. The assumption is that you’re an adult and you’re going to be respectful of the hard work you’re looking at. So I spent a lot of time with my hands ostentatiously in my pockets while I was leaning to put my face inches from the costumes and props. There’s a really neat aspect to prop-making: you decide what distance the camera’s going to get from it. Stuff is only super-detailed if the camera is going to linger. Otherwise, no sense wasting the time. But when it needs to be super-detailed, it’s OMGdetailed.

American Spies in North Korea » « Monday Meslier: 122 – The More Ancient and General a Religious Opinion is, the Greater the Reason For Suspecting It