When I was in high school I got an old singer sewing machine at the goodwill, managed to adjust it until it worked correctly again, and used it for light leather-work. Sewing machines and rope-making machines have a similar problem: you want to get the thread around the bobbin without moving it – which is a really complicated trick since (for the bobbin to be stable) there has to be some kind of supporting thing that holds the bobbin.

In the case of a rope-making machine, the maximum speed at which you can make rope depends on the speed at which you can reliably move the bobbins in their race. Sewing machines work around that problem because, for machine-sewing, you want it to be very fast (humans who learned how to ply a needle and thread could sew remarkably quickly). If you enjoy mechanical puzzles, I’ll leave it as an exercise (or maybe I’ll do a post) to figure out how Singer’s sewing machines worked. By the way, it took a great deal of effort for Singer to perfect the sewing machine, but it was a world-changing invention at the time; everything prior to Singer was hand-sewn. Everything from sailing ship’s sails to lace doilies – the production rate was limited by the speed of human hands and the number of hands.

The loud “PFFT” sound is the hit/miss engine that is powering it via the chain-drive on the right hand side. By the way, I would never ever ever ever have an exposed chain drive like that anywhere near where a human or a dog or a dancer could get tangled up in it. #SAD.

In the video you can see the circular races that the bobbins walk around; it’s controlled by the meshing of gears under the top plate. You can imagine that the top speed is pretty limited – eventually you’ll have a timing error and one of the gears will bind and then the machine fails. It’s also interesting to look at these early industrial machines and realize that the failure mode is “someone notices something is wrong with the machine” and runs over in time to do something with it. Modern machines take into account the failure modes – something we have learned mostly from our attempts to build computers: think about what’s likely to go wrong, what it looks like when it does, and program the system to do the right thing (usually shut down). So there would be some sort of tension sensor on that chain so that if someone got their hand in it, the extra tension would immediately stop everything. In terms of software, that sort of thing is extra infrastructure that’s “free” (it’s just lines of code) but in a machine, it equates to sensors, more points of failure, increased costs, increased control systems, and more complex and harder to understand failure modes. 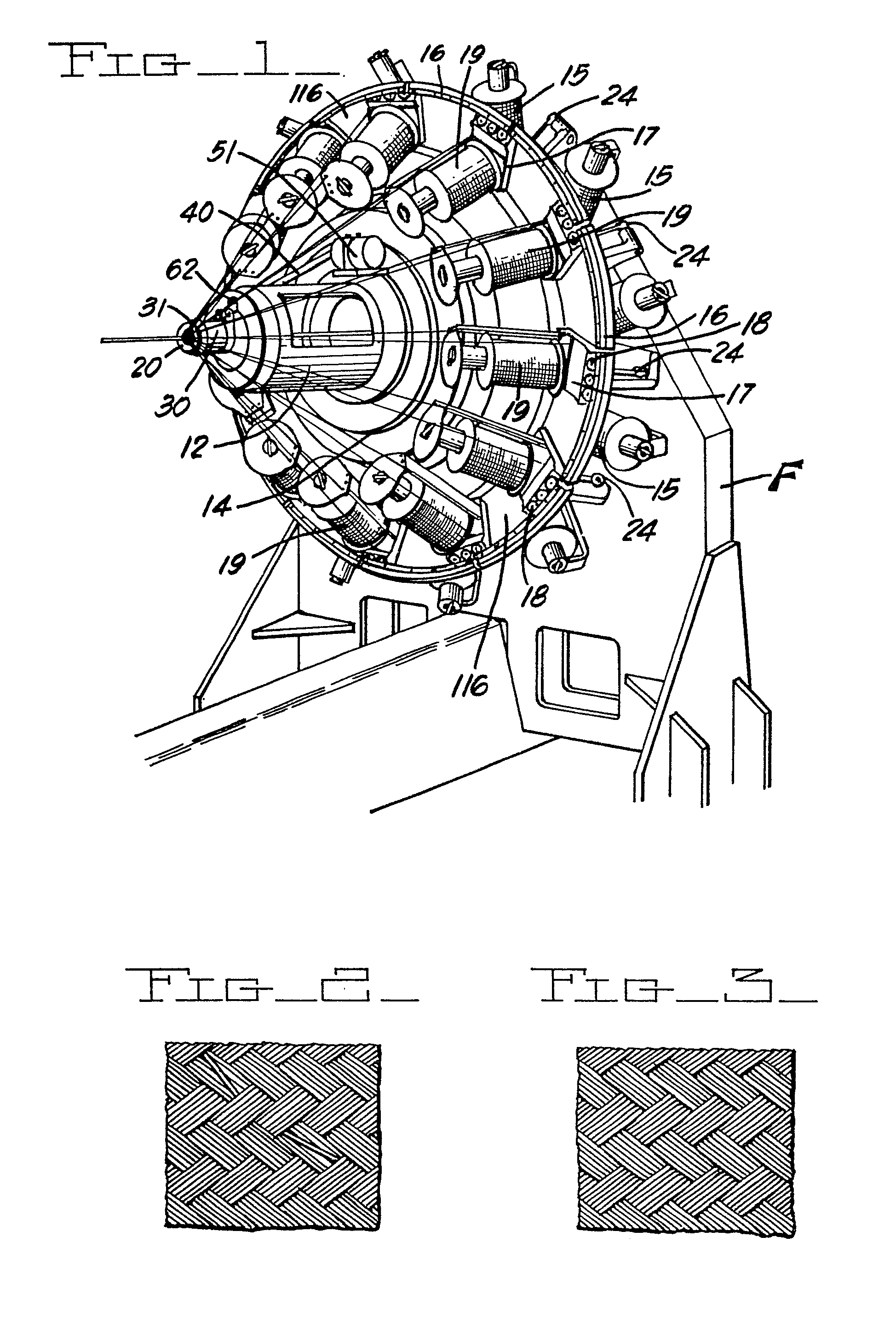 There is a second generation rope braider. It’s called a “Wardwell cam ring” and has been evolving since the 1890s; there are still improvements being patented today (still by Wardwell, Inc. Presumably to keep their ownership of the basic design). What I love about this stuff is that techniques in machine design evolve and improve until eventually everyone just says “ah forget it” or there’s a breakthrough and everyone jumps over to the new design. The Wardwell cam ring braiders can do multiple threads in the braid – hence the distinctive metal-braid and carbon fiber braids we began to see in the 90s. The neat part about the Wardwell machine is that it doesn’t move the bobbins between eachother, it moves an inner ring against an outer ring, and the outer ring flips the thread around the inner ring bobbins using a cam. This approach can’t run arbitrarily fast, but it can run a whole lot faster than moving the bobbins around on gears.

I could stare at the patent pictures of that thing for a long time, and I wouldn’t be able to figure it out. It’s still hard – the thread has to go around the inner bobbins, which are supported on a polished disk (you can see them in the center) that the thread spins around – that’s basically Singer’s sewing machine bobbin design, too! 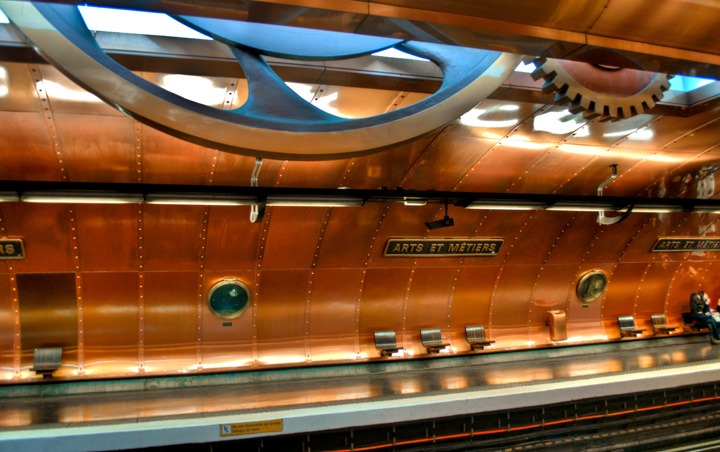 One of my favorite places when I was a kid was the Musee des Arts Et Metiers (arts and jobs) in Paris. It’s an amazing place that has become a bit less amazing since they pared down the exhibits in the 90s; for most of the industrial age the French patent office required that you submit not just your design, but a working model. The museum used to have models of the evolution of some kind of machine, all laid out, for example a threshing machine, which started as a ground-level cart with a person standing in it with a scythe and a sort of automated rake powered by the forward motion of the horse pulling it – then evolved to an automated rake with a cutting bar, etc. The curator of the museum placed these models in evolutionary sequence so you could see how the clever humans figured out how to take the human out of the loop more and more as the machine evolved. My understanding of evolution comes from machines, not biology: there is just as much interchange of ideas (genetic material) and experiment (survival) as there is in the wild. And commercial success is the decision-maker of reproduction. Designs like Singer’s sewing machine, which are used everywhere, are sort of like the shark of the ocean: so successful there’s not much need to improve any more.

The evolution of rope braiding machines continues, because next they’ll be spinning nanotubes on them. It’ll probably be a design similar to Wardwell’s but eventually maybe there will be linear motion via solenoids.

Singer sounds like an interesting character. He became very wealthy but was not welcomed into New York’s upper crust, who were mostly the descendants of bankers and real estate speculators and sneered at a machinist. Remember: the Carnegies and Fricks and other industrialists actually didn’t invent their processes (they got their industrial processes the traditional old way: they stole them!) and their money was a whole generation older than Singer’s. Oh, and Singer was jewish. So Singer pretty much said “screw you” and spent his money lavishly, building several huge families, buying huge houses, and huge carriages. He was sort of a spiritual ancestor to Elon Musk: he liked carriages, so he started a carriage company to build himself carriages (which then went on to make hearses, because: big) A bunch of American robber barons trying to exclude someone for being declasse, that’s kind of funny, isn’t it? 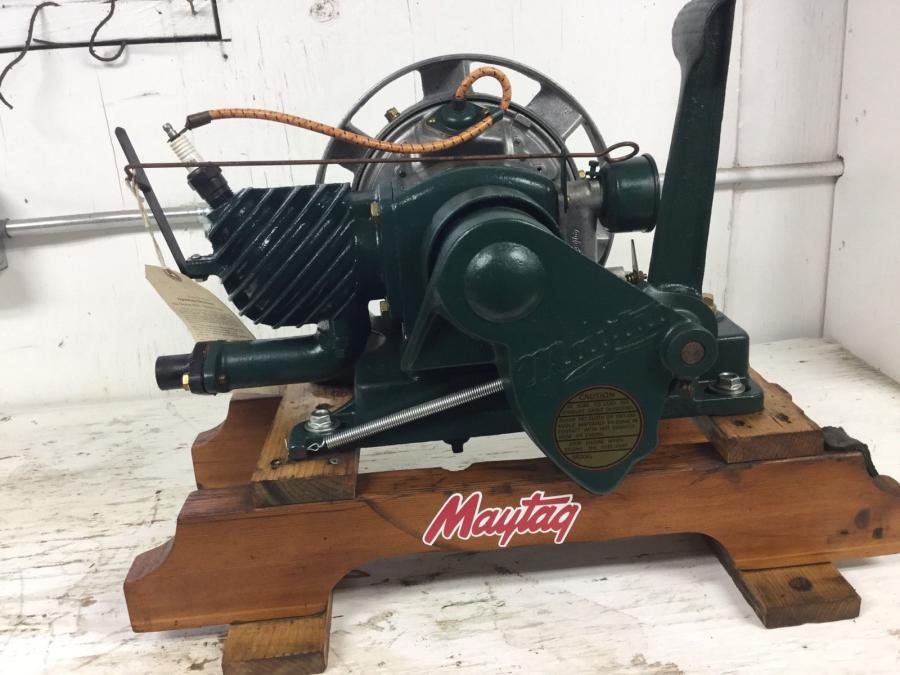 Hit/miss engines are wonderful old industrial age things. This is a hit/miss engine for powering an old Maytag washing machine. You can get it on Ebay for a mere $700! [ebay]

Hit miss engines are called that because of the way they work: there is an inertial governor that spins a weight out while the flywheel is at a certain speed (you set the speed using the governor) when the arm of the governor drops, it makes a circuit and the spark plug can fire the cylinder. So, the engine will automatically idle, but as soon as you start taking power off on the flywheel it’ll fire more frequently as necessary to keep the flywheel’s speed up. You start it with a single kick on the large lever to the upper right, which starts the flywheel spinning slowly, then the engine immediately “spins up” and then starts to idle. It’s a great example of a simple feedback control loop. The castings are large because the thermal mass dissipates the heat. Some of them have a ‘radiator’ for water cooling – a big tank on the top that just evaporates and cools the whole block as the motor heats up.  I know a guy in Florida who has an old hit/miss that he hooks up to an alternator when there’s a power failure. It works fine. I never understood why anyone buys those little “portable power” gas engines – they’re so loud and complicated. Maybe it’s because of the “portable” part. My grandfather grew up on a farm where they used a hit/miss engine to pump water; it was state of the art in 1920! There is a fellow on youtube [here] with an absolutely gorgeous hit/miss restore with an alternator; it’s a typical 1930s field/portable power system.

What Normalizing Authoritarianism Does For You » « A Knife Mounting