Last year, a friend of mine recommended I read Thomas Hager’s The Alchemy of Air. [Both recommended reading] Then, I was talking about Derek Lowe’s “Things I Won’t Work With”[lowe] column with a former chemist, who expressed shock and horror that I had read The Alchemy of Air and not Hager’s other book: The Demon Under The Microscope. 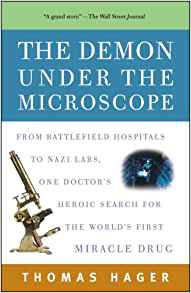 So, let me dispense with some typical book review-y stuff: Hager’s writing style is lucid and direct. He does not lecture down to the reader at all, and manages to explain technical problems so easily that they slide right into the narrative and you hardly notice them. His language is not precious; he’s not trying to write “science literature” – it feels like you’re getting told a story by someone who’s deeply knowledgeable about some things that happened to some very interesting people. His stories about science are character-driven to the extent that we need to know about the people (we do) but he doesn’t novelize them – he writes about who they are and what they did and why, in a way that’s not impersonal but isn’t trying to project a view of their inner lives.

I find the result is remarkably readable and engaging and educational.

A few hundred miles away in France, just before Domagk’s unit was decimated at Ypres, another, far more powerful man had also dedicated himself to beating wound infections.

Sir Almroth Wright took one sniff of the badly lit lower-level rooms he had been given in the Boulogne Casino, called for Sargeant William Clayden – Clayden, everything Sir Almroth was not, British army through and through, always regulation, spit-and-polish – and instructed him to pour creosol down the drams several times a day. Perhaps that would stop the intolerable reek. It came, Sir Almroth figured, from the decomposition of draining blood. It was the smell of rot, very similar to the horrible smell of gas gangrene.

The Demon Under The Microscope is about the invention of sulfa drugs. Hager’s style is to trace parts of the threads of the history, the characters and the pieces of the puzzle that they brought to the table. It’s a high-level meta-analysis about how science happened in one area, but it’s done so smoothly it feels more like a good detective novel – which, it really is. Let me give you an example of how he pulls some of the pieces together: Germany in the 1920s was leading the world in industrial chemistry and was producing a great deal of interesting aniline dyes. Some of the chemists producing dyes had noticed that certain compositions dyed cotton better than wool, or dyed leather better than silk. He zooms back to Leuwenhoek and microscopy, then forward to Koch and how staining was important to observing under a microscope, then brings back in – very carefully – the dawning awareness that stains’ different sticking to different molecules was going to be very important to making drugs that stick to certain bacteria. It’s like listening to one of David Attenborough’s nature shows: something that appears to be a minor aside is actually the set-up for explaining some evolutionary mechanism in its broader context.

The broader context (this applies to The Alchemy of Air as well) is that science is not an “ah ha!” moment like we see in more simplistic made-for-the-big screen dramas: it’s a grind and worse than that you don’t know if you’re going to find anything at the end of your grind except more grinding. Or, maybe you’ll be listed as “one of the contributors to…” or perhaps “the person who stumbled right past the answer.” Hager is gracious to those people, as well, because he helps us see them as the shoulders that the greatest and luckiest stand upon.

These are not small matters that Hager writes about. In The Alchemy of Air he teaches us the story of the Haber/Bosch process for extracting nitrogen out of air, into ammonia, which can be used to make fertilizer, explosives, or toxic gases to release on a battlefield. At the beginning of The Alchemy of Air he sets up the basic conundrum by beginning with Kelvin addressing the Royal Society and explaining that humanity faced mass starvation because of the incipient shortage of agricultural fertilizers. From the beginning of the book, Hager plays back and forth across the benefits and agonies that resulted, to everyone, as a result of Haber and Bosch’s research – damned if you do, damned if you don’t. How many people lived and died different lives as a result of sulfa drugs and antibiotics in general, or the massive availability of nitrate fertilizer and high explosive?

In The Demon Under The Microscope we realize that for all intents and purposes the history of medicine is nothing but “experimenting on humans.” Patients are injected with stuff; sometimes they get better. Other times, they go blind. New stuff is tried. Sometimes there are amazing cures. The big-screen drama of science simplifies this down to a “ah ha!” moment but Hager shows the story as more noble by exposing the dirty laundry. There is such an amount of laundry!

None of Klarer’s newest variations were working. After a few weeks, Domagk went back and retested Kl-529. This time his results were not as encouraging as they had been in the first round. In December he retested again. This time Kl-529 did not work at all. This was precisely what was not supposed to happen in Domagk’s carefully refined test system, which he had devised specifically to avoid any sort of random variation. His lab notebooks now began to show uncharacteristic question marks along with strigs of oWs – ohne Wirkung, without effect.

Hager’s books have a natural audience in those who are interested in a good detective story, and science, who can handle the beauty and horribleness that is mankind. I come away from them with an increased suspicion about scientism: there’s a lot more “try stuff at random” than there is science marching forward with experiment and theory hand-in-hand. And it reminds me not just how far we’ve come, but how recently. My grandfather grew up in a time where there were no antibiotics; I remember him telling me about a co-worker at the Hormel slaughterhouse in Minneapolis, who nicked himself, got an infection, and died a few days later. That was 1940. And, with all these science stories, the story is never fully told. I haven’t gotten to the end of The Demon Under The Microscope yet, but I know we haven’t gotten to the end of the story about antibiotics, either. The race continues: miracle drugs against miracle bugs, and bets against evolution are not likely to succeed.

I thought about coming up with some kind of “book rating” scheme but here’s the thing: unless I’m posting stuff from a book in order to make fun of it (e.g: my postings on Applied Eugenics[stderr]) all I can say is “I think this is a really good book, you should read it.”

If you’ve read both of these books and loved them, and have not read Siddartha Mukherjee’s “The Emperor of All Maladies” it is a similar story of discovery and unfolding of science. If you liked these books, you’ll almost certainly like Mukherjee, though it’s even closer-term history. We are at least some distance from WWI and WWII, those of us who lived in the golden age of antibiotics.