I encountered a singulatarian recently. And we had an interesting conversation, using mostly very old technology (called “language”) while he waxed poetic about the rapid increase of new technologies and how powerful they are. Now that I am becoming a grognard, I had to allow that I was less impressed. I did a version of this chart on a napkin, which I have since translated to powerpoint: 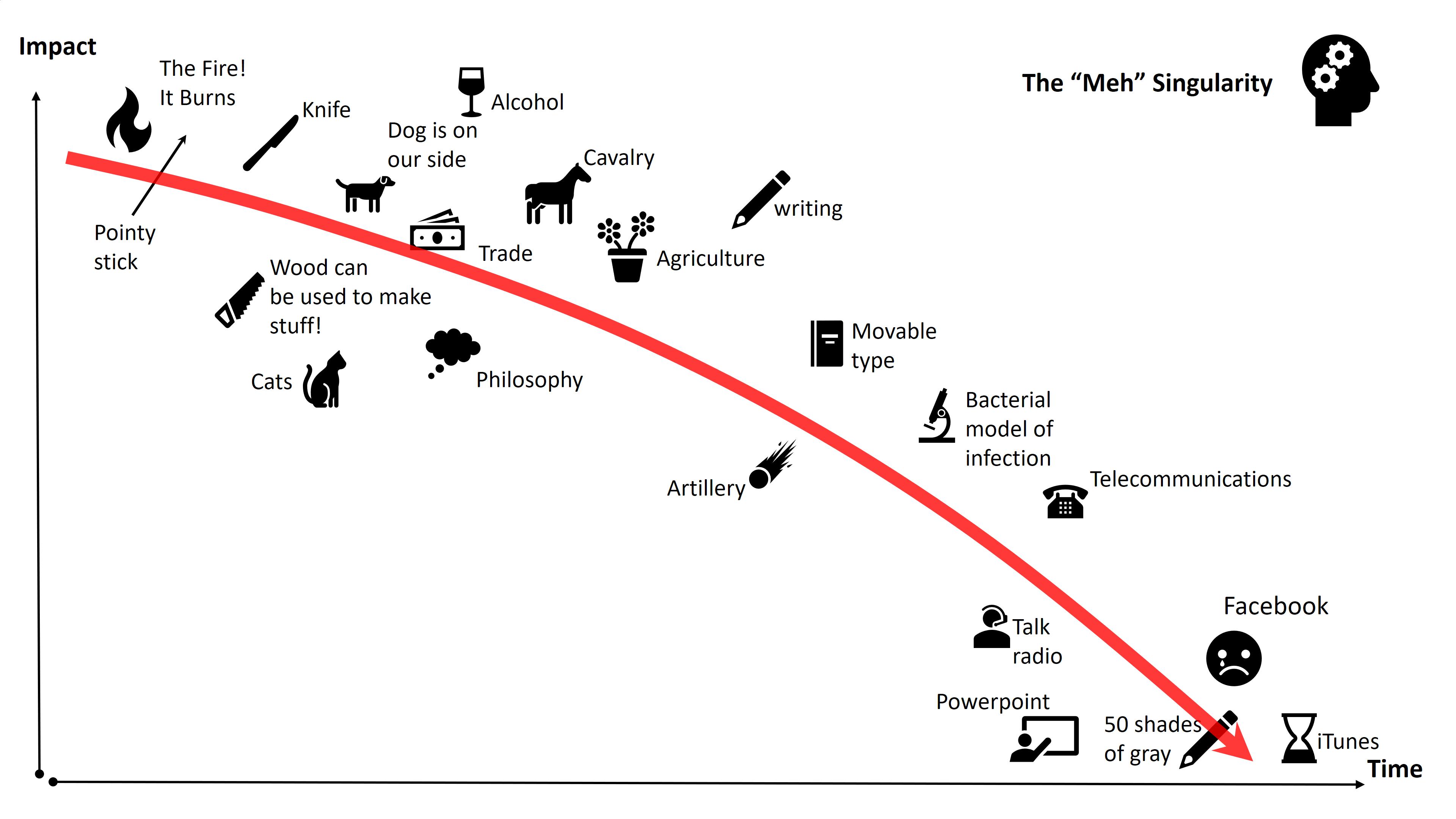 As you can see, things have been going downhill rapidly for humankind, and are not just getting worse, they are getting worser faster. We went from the invention of music, to iTunes, in a very short time, with a brief upward tick caused by The Ramones (not shown)   We went from horses (which were basically reliable and self-powered and self-driving within limits) to USAirways and self-driving cars – and now it takes all day to get anywhere even though we can travel at 600mph. We went from Plato and Lao Tze to Britney Spears and from taming fire to “Internet of Things” remote-controlled bongs that take hours of configuration to set your couch on fire.

Futurists like Ray Kurzweil like to cherry-pick their data points to show this tremendous uptick in processor power in the last 30 years (that’s true!) but neglect to consider that the processor power isn’t actually making gameplay any better.

The futurists’ claim revolves around “things are getting better” but if you want to think in terms of positive human impact, which was greater: the invention of “fishing” or the hard disk drive? The bacterial model of infection, or “psychology”? Darwin’s “Origin of Species” or “Harry Potter”? Agriculture or the Internet? Alcohol or Playstation? Murasaki Shikibu or “50 Shades of Gray”? Voltaire or Milo Yiannopolous?

This idea came to me a few years ago, when I was watching a talk by Burt Rutan in which he explained that humans developed flight and perfected it fairly quickly. In fact, he argues, we perfect stuff pretty fast and then spend a long time making it cheaper and improving it incrementally. That appears to be the case, to me. When I look at computers, I don’t see them as tremendously different, really. Running a new system that is 100,000 times faster than the first one I programmed doesn’t make computing much better because the operating system (which my first computer didn’t bother having) is 50,000 times slower and the code is running in an interpreter in a browser. If people are going to “upload” to computers, they’d better get rid of Javascript and SSL before they do.

I’m pretty sure I’ve overlooked a few important data points. Was human achievement of flight more significant than the discovery that we could tame horses? I know I’m being unfair to the present: there is some amazing stuff being done, like semi-controlled nuclear fusion. It just seems weird to me that the species that created The Great Library at Alexandria also developed iTunes. Are we getting stupider or is it something in the water?

Re: Rutan – we went from hot air balloons in 1783 to the SR-71 in 1966. That’s a measly 183 years. Then, we basically discovered that going 5+ times the speed of sound is of limited usefulness: it’s much more useful to pack 400 people knee-to-seatback in a commercial jet and get them to Disneyland cheaper. What happened was that we start bumping quickly into the physical limits of scaling things. That’s basically the problem with the “singularity” – it presupposes unlimited scaling without physical limits, except that our gross energy budget has not actually been scaling limitlessly.

It’s Worse Than You Think: Robo-Profiling » « The Fronde