I can’t understand why anyone wouldn’t want a pipeline going through their area.

Two workers suffered burns, one seriously, and another was unaccounted for after a large explosion and fire Thursday night (Feb. 9) at a 20-inch high-pressure Phillips 66 pipeline at the Williams Discovery natural-gas plant in Paradis, according to St. Charles Parish Sheriff Greg Champagne and Louisiana State Police [nola.com]

It’s not just that these things leak: fuel/air explosions can be pretty nasty, too. And, once they’re burning sometimes the only way to put them out is to stop the flow and let it burn until there’s nothing left to burn. 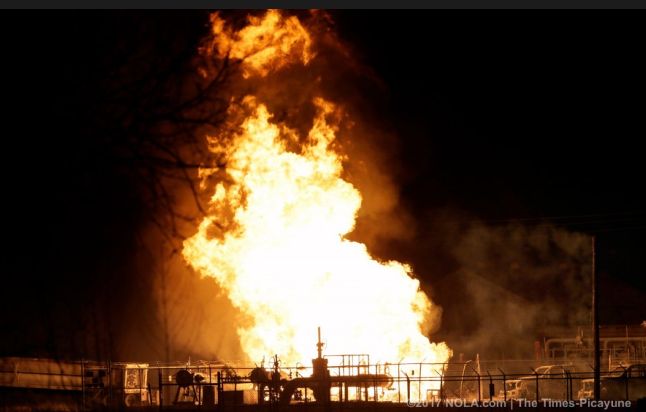 Considering the pipe was carrying propane, yeah, I bet it was. Good thing there was only one casualty and one “unaccounted for” – which may be code for “was blown to pieces.”

Look how hot that is! The telephone pole about 40′ away is smoking, and you can see the tires on the parked trucks are smoking, too.

Sauce for the Goose » « On a Lighter Note