When I was a kid my parents used to set me loose on the streets of Paris, with coin for admission to various museums, and a croissant and some hot chocolate. And I almost always wound up spending at least a day at Les Invalides, the military museum.

It was there that I fell in love with Napoleonic military uniforms. The idea of going to get shot to bits in such a fine outfit never made much sense, but if you’ve got to get shot to bits, you may as well be looking snappy, I suppose. My favorites were always Meissonier’s paintings, which are incredibly detailed and accurate down to every snap and rivet of the saddles, every loop of the hussar’s dolman jacket. 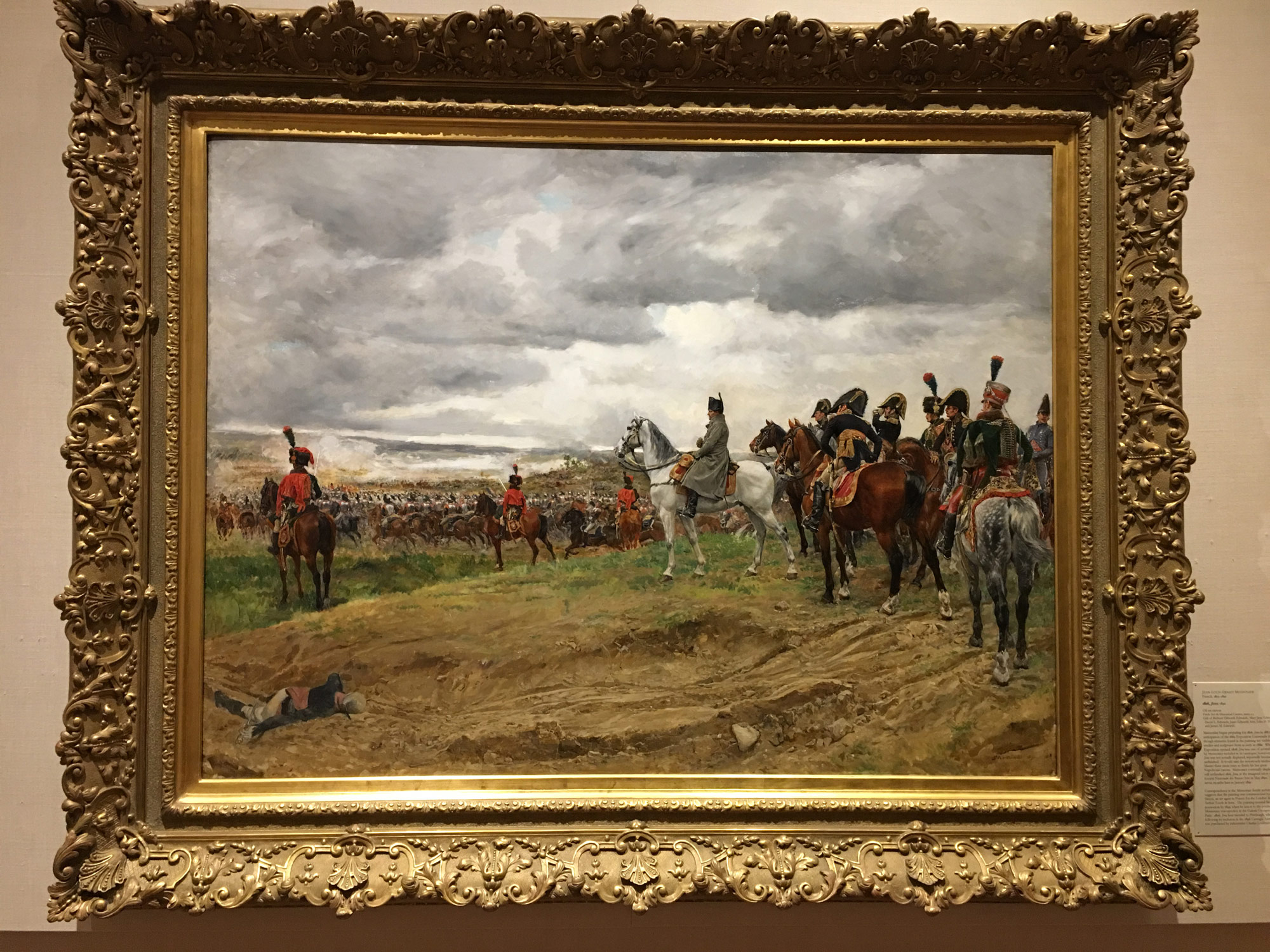 They said no photography but I didn’t use flash, mjr 2017

You can imagine how thrilled I was to see this old friend, which has been lovingly and expertly cleaned so that the figures practically leap out of the oil.

It’s Napoleon (of course!) at Jena,[wikipedia] watching his cavalry deploy. Behind him are some of his marshalls, with Murat and Ney conspicuously absent – they were leading different wings of the cavalry. That’s probably Lannes leaning forward on his horse. The outriders in the gold, red, and green hussars’ kit are the Chasseurs De La Garde Imperial – the imperial guard’s light cavalry. I always have a great time trying to identify the various marshalls: Ney is always portrayed with a great mane of curly red-gold locks, and Murat is usually a blaze of gold and chrome yellow velvet (really: the neapolitan hussars’ uniform was… uh.. recognizable on the battlefield)

Meissonier’s “trick” was that he had access to a huge amount of the uniforms and gear of the period and worked from live models carefully posed exactly how he wanted them. 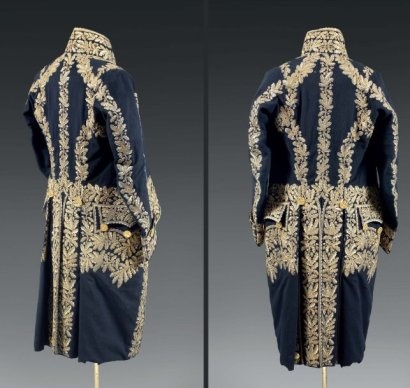 Back in the late 80s the Metropolitan Art Museum had an exhibit of napoleonic clothes (“The Imperial Age Exhibition”) including one of Marshall Davout’s uniforms. It had something like 1/2 lb of gold sewed onto it. The way those gold trimmings are done is you drop molten gold through a shot tower, collect the shot, hammer them flat with a tiny hammer, pierce them with a needle, then tack/sew them down. At present there is one artisan who still makes the stuff, in Italy, for the papacy.

In the painting, Davout is the pissed-off looking fellow behind Napoleon, mostly blocked by Lannes. Davout was a great strategist in his own right, but operated comfortably in Napoleon’s shadow; part of what makes Meissonier’s work so great is that he studied his subjects intensely and attempted to capture likely positions and poses based on their character.

My favorite Meissonier is at the Metropolitan Art Museum; it’s of the cuirassier heavy cavalry maneuvering past the imperial lookout as they are committing into the battle at Friedland. The movement of the horses is spectacular. 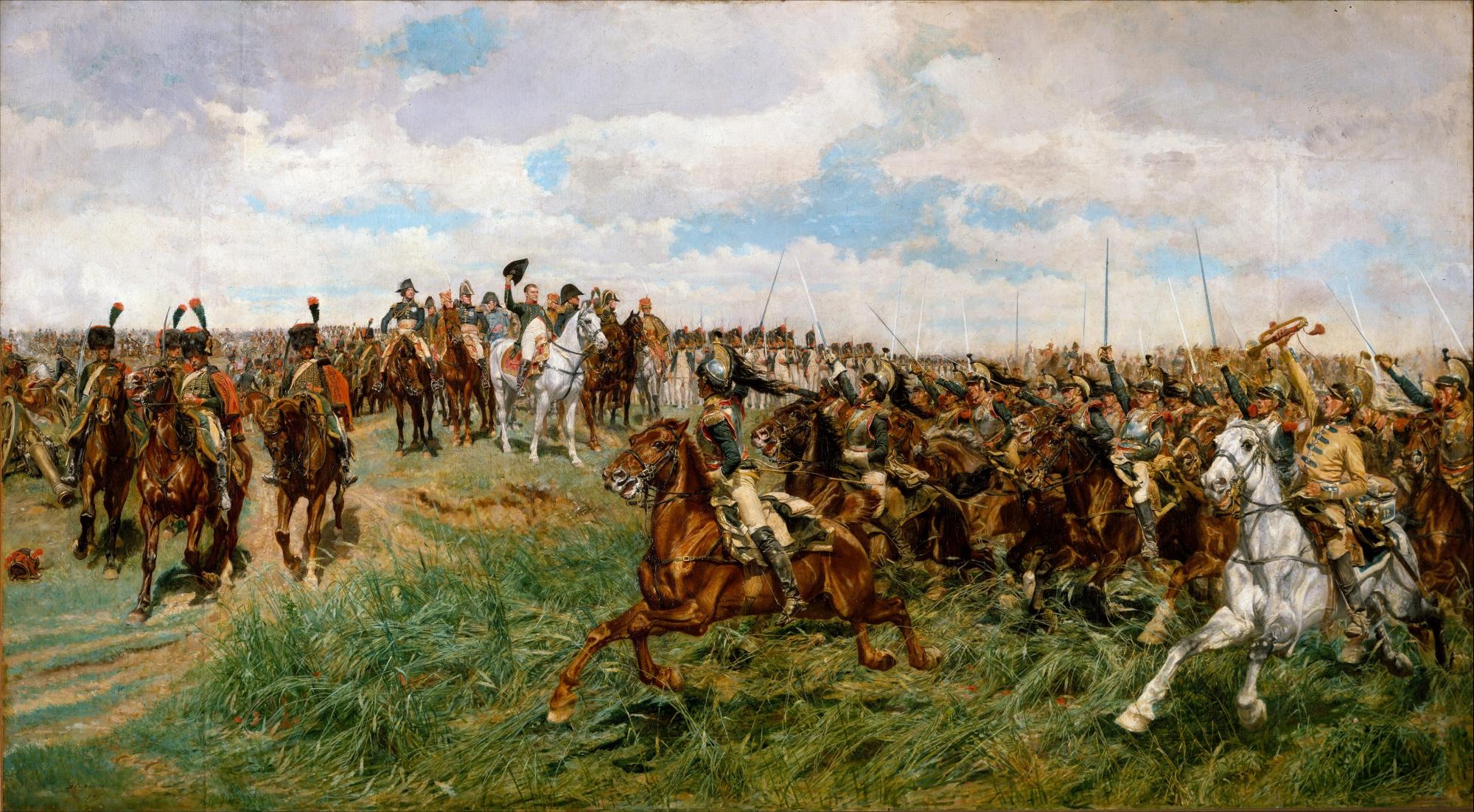 You can see Murat to our right of Napoleon, in full bling, with the ever-present Chasseurs of the Imperial Guard providing security.

While I was looking around for a good picture of that painting I came across a description of it, which included the tidbit that it created some scandal because an American department store magnate purchased it sight unseen from Meissonier, for the then unheard-of price of $60,000. Some perspective: the Frick’s mansion, which I visited Sunday, cost the same amount in 1860 – they subsequently spent $300,000 turning it into one of the most expensive buildings in the US, at the time.

Money be damned; there is something that will always be priceless about hand-applied pigment, when the artist’s eye brings a scene to life on a blank surface. If there’s magic in the world, that’s it.

A Security Question » « Quietly With No Fanfare