Today, for no reason other than curiousity, I submitted a pair of FOIA requests. 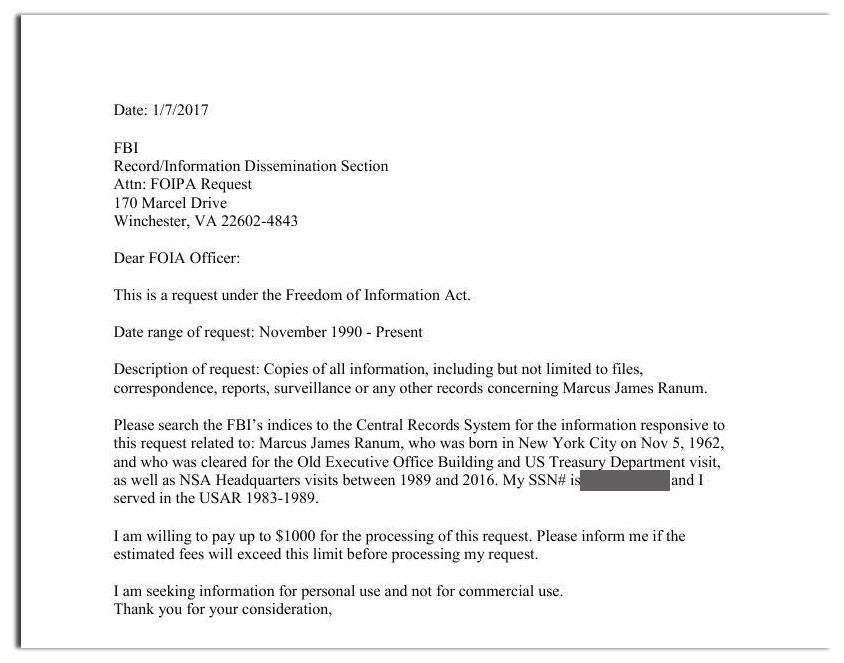 I blanked the SSN# out because otherwise I’d have people ask me “why didn’t you blank that out?!” but the sad truth is that the US Army and later the Office of Personnel Management and probably a bunch of other federal agencies already leaked it to anyone who wants it badly enough.

I thought it’d be interesting to see what they’ve got on me. At various times I’ve been in some pretty interesting places like NSA HQ in Ft Meade the CIA HQ in Langley, DARPA headquarters, and the Old Executive Office Building. Oh, yeah, and the US Treasury HQ. Usually when you get invited into those places, they ask for your details (including your SSN#) a week or so ahead of time – I assume they want to check some file, or other, to see if you’re a known provocateur.

When I was working on the whitehouse.gov internet project a few months into Clinton’s first term, there was a minor kerfuffle in the news about people without security clearances having access to the White House. From the sound of it, there were people just running all over the place (which is kind of what it looked like) so I was given all the paperwork to fill out for a security clearance. I got to the question that read “have you ever advocated the overthrow of the government?” and I asked the Secret Service guy who was watching me fill it out, “Does ‘overthrow’ mean violent? What if I just want it to go away peacefully?”  That was when I discovered the Secret Service joke they re-told in “Men In Black”, where Tommy Lee Jones says he had his sense of humor surgically removed. I didn’t like all the questions and I didn’t remember a whole lot of the things they were asking, so I said, “I guess you are going to just have to get another internet firewalls expert.” So I continued to access the building without a clearance; I just no longer had a pass and had to get cleared in each time (that way I was a “visitor” not a person with access). Another funny thing happened around that time: the Clinton administration apparently decided there were way too many people working in the White House and had a big “headcount cut” to show the taxpayers they were serious about reducing waste, etc. The next day I went in and a bunch of the same people were now wearing NASA badges and Department of XYZ badges. They didn’t work for the White House any more; that’s how you cut headcount in imperial Washington.

Anyhow, what got me started on all of this was I was rummaging through the government attic website and found the FBI’s report on Ike Turner[pdf]. You remember Ike, right? Tina’s husband. It’s 352 pages long. I skimmed through it and it appears that the FBI spent a lot of time asking people about Ike, because Ike had apparently kited a few checks at one point or another. 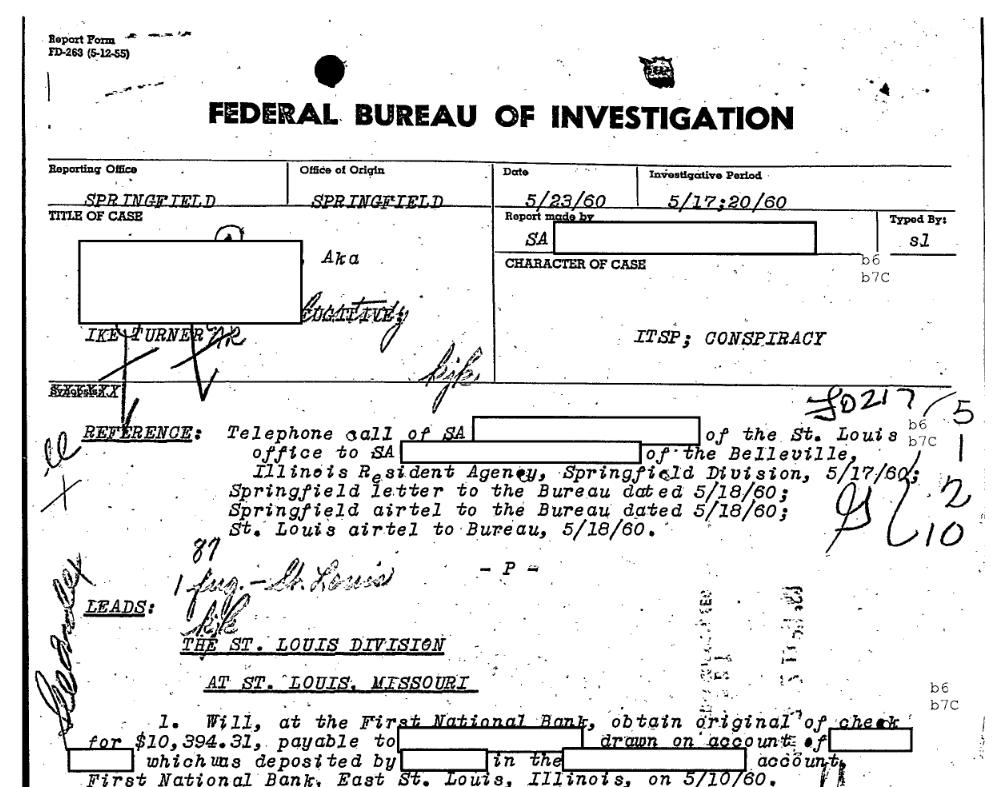 The FBI sure likes to investigate people, don’t they? They investigated the hell out of Ike.

If you want to do a FOIA for your own files, there are instructions in various places on the internet. I sent a FOIA to the CIA (CIA: How to submit a FOIA request) and the FBI (FBI: Sample FOIA Request Letter) If anything comes back, I’ll keep you apprised.

If they have 352 pages on Ike Turner, I wonder what they have on various politicians.

By the way, I’m experimenting with a different way of presenting material. I will stop footnoting and will put things inline, taking advantage of – you know – web hyperlinks. Hyperlinks! What a great idea! I’m going to continue to use dividers to separate my own commentary on my postings from the posting, or reference blocks where I include references. I hope this’ll make it more readable and I appreciate the feedback.

The First Rule of Book Club » « I Never Bought It, Anyway