Over at warisboring (one of my favorite blogs) there’s an article about the drone pilot who is collecting so much footage of the police brutality at Standing Stones Camp.

One of the points the WarIsBoring writers make is that there is a freedom of speech issue in play: the drones are being used to collect information about police activity in a way such that the police can’t grab the camera and pop the memory card. There is already plenty of case-law that says police can’t take your camera, can’t take your memory card, can’t order you to stop filming them.

In this case, the police are lying, and the cameras are showing it.

When the police say “protestors started a riot” it’s awkward when the drone cameras show non-resisting protesters getting shot in the face with pepper spray. It’s got to be annoying as hell to the police so … they fired on the drones.

Not a nice way to treat a $1200 DJI Phantom 3, if you ask me. As Drone2BWild points out, shooting at a civilian aircraft, which is regulated under the FAA, is a federal felony. Don’t expect anything to happen, of course. You’ll notice that the drone pilots are keeping them low to the ground – presumably because they’re trying to do the right thing and not go so high up that they risk hitting other aircraft.

The ACLU recommends photographers tell cops: “I’m exercising my constitutionally protected right to document public police activity” which is, admittedly, difficult to do from a flying drone. But that does not excuse the cops “shoot first, because, I can” attitude.

There are some great videos of the expanse of the camp and all the protestors. All the beautiful colors of the protestors, against the sky and the land. And the police in their “tacticool” looking like storm-troopers. There are no marketing or strategic geniuses on the side of the police, are there? 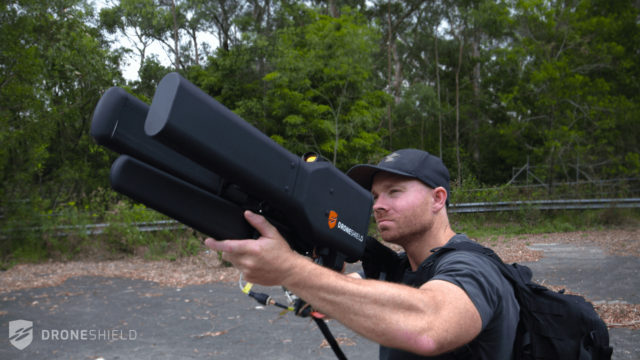 Meanwhile, for every problem, there are carpetbaggers who’ll rush in and militarize it for the police:

The Dronegun appears to be an antenna and a transmitter that overrides the drone’s controller signal and allows the gun to take it over. I wonder what the FCC thinks of it?

Security people have been expecting drone takeover tools for a while; it seems like a pretty obvious idea. The question is how the police state will respond when the drone manufacturers add a bit of encryption into the control signal. Speaking of strategic genius: spending thousands of dollars on something that can be defeated with a software patch/firmware update seems kind of stupid. The FAA would have been smarter to require that all drones have an immediate “return home” override that law enforcement could transmit when appropriate. Of course, since the DroneGun is being marketed at people who are afraid of having ISIS drone-dropped bombs, there’s the problem that it depends on the terrorists being nice enough not to use secure communications or treat the drone as a fire-and-watch cruise missile that just goes to a GPS coordinate and blows something up. It seems to me that this is a ripe area for stupidity, and we’re looking at the tip of an iceberg of stupid.**

The Atlantic: What to Say When The Police Tell You To Stop Filming Them*

Cinema5d: DroneGun Capable of Taking Down a DJI Phantom From 1.2 Miles Away

(* “Fuck you” is probably not the best idea. I favor the bullshit argument offered by the police: “It’s for your own protection. So you can’t be falsely accused of being a thug or criminal.”)

(** The strategic genius would have a partner with a scope-sighted rifle, “when you see a guy running about with a great big black doo-dad, shoot him.”)