The other day I posted about the Iraqi army advance on Mosul, and observed that one of the vehicles in the picture appeared to be a US-made M-1 Abrams main battle tank.

I didn’t think that, at $5 million apiece, and still being fairly high-tech, the US would let gear like that out into the wild. TL;DR: I hadn’t realized how badly the warmongers in Washington have been screwing up. 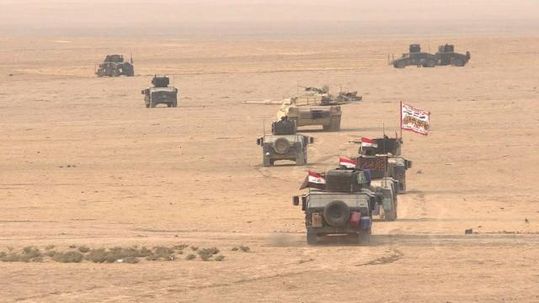 There are a lot of things going on here, so it’s hard to simply read between the lines, but they’re all bad things, so the general trajectory doesn’t change much.

I was correct that the tank in the picture is an M-1 Abrams.**

I didn’t comment in more detail, but, when you see a tank with its turret traversed laterally like that, it’s either hull-down with only the turret showing, or it’s engaging in emergency off-axis fire: the front armor should generally be facing toward the enemy, since the flanks of the tank are both larger and thinner. So, looking at this picture, of vehicles out in the open, tank flank on to something, other vehicles facing at 90 degrees to the column line of travel, I assume we’re looking at either a parade or amateur hour. Or maybe an amateur parade. Which is why I was puzzled to see an M-1 in the middle of that. But apparently the US has given a fairly large number of M-1s to Iraq. And Iraq has apparently lost a fairly good number of them already.

I’m getting ahead of myself.

I googled for “Abrams Tank, Mosul” and instead of finding what I expected – some sotto voce article about “treads on the ground aren’t boots” admitting that US Army tanks are participating in the battle of Mosul, I found a bit about that the Iraqis had one blown up just that day.

The tank is silhoutted nicely on a ridge-line (exactly like tanks aren’t supposed to be) and some enterprising lad is firing an Anti-Tank Guided Missile (ATGM) right up its rear quarter. It’s a beautiful shot, too, it hits right on the turret ring and blows the tank sky high. If there was anyone in it, they had no idea what happened to them; they were on fire and then died. The source of the video (and the behavior of the ATGM) claim it’s a Russian-made “Kornet” – in a normal engagement, the tank driver would have been expected to rapidly move perpendicular to the line of travel of the missile, or get behind something. M-1s are surprisingly fast tanks, and when the driver gets rough on the throttle, they’re like a 60-ton jackrabbit. The tank was probably parked and, given the fuel consumption of the M-1, its engines were probably spun down, so it was lunchmeat.

The ways to learn not to do that sort of thing are practice, training, competitive training, and analysis. Perhaps simulation training but better to be training in an actual tank (besides, that gives your maintenance crews a chance to train, too!) One thing that is fairly clear is that the US has not built in Iraq a western-style military. 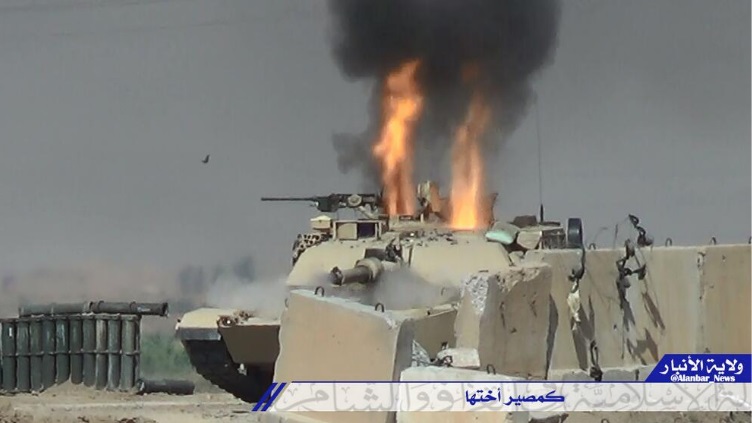 ISIL posted image of a brewed up Abrams

That’s only a piece of it, it turns out. I checked on youtube for different viewpoints of the incident and it turns out that a fair number of M-1s and other medium armor have been lost in Iraq. Remember, the US toppled Iraq with the loss of one M-1 against “the 4th largest army in the world” and that one M-1 suffered no casualties and was later refitted and returned to service. The Iraqis have lost a bunch: 5 and have had 28 others damaged.

When there are flames shooting out the hatches of the tank, the tank is an oven. If you saw “Fury”*** you’ve got a pretty good rendering of how visceral a tank hit is: you have a fraction of a second to get out, or you bake. When a shaped charge – and that’s the only thing that will go through the armor of a modern tank – hits, it punches a hole and there’s a supersonic spray of molten steel that zings around inside the crew compartment, lighting everything and everyone on fire. The tank in the picture above is semi “hull down” with just the turret exposed, like it’s supposed to be. Something else went wrong. 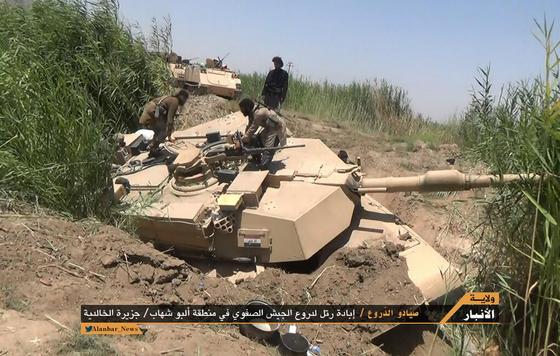 One does not simply tow a 60-ton tank (source)

There are horrifying reports of the kind of damage that the Iraqi army are suffering. In the spring of 2014, they lost 6 helicopters, and in Anbar Province an Iraqi armored column waddled into an IED trap and at least one M-1 and two M113s were abandoned and set on fire. It appears the Iraqis are poorly trained and bailed out of some of the vehicles, probably got shot, and either way, the vehicles were just sitting ducks once they had been abandoned.

Another ATGM, another Abrams.

It’s odd that there appears to be normal road-traffic going on. It’s also surprising that someone appears to have been near the tank (probably not in it) and left the scene after the explosion. 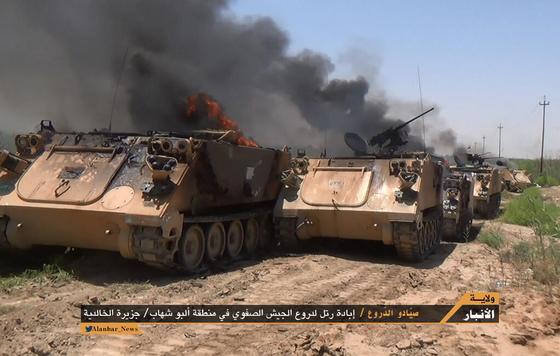 Supporting a modern military is expensive because there are a lot of moving parts and every single thing that the military does comes with a cost. That tank that went into the ditch? You need a tank recovery vehicle to extract it, and a week of mechanical-time with a properly equipped shop (at a minimum) before it’s ready to go back out on the road. The engines of these tanks are not like the diesels used in WWII: they’re gas turbine engines that require a lot of specialized tools and skills to maintain.

My guess is that the US thought it would give Iraq all these expensive weapons, and US firms would collect back lots of those oil revenues in terms of repair bills and parts bills for fancy war-toys. But the Iraqi army doesn’t look like it had, or has, the competence to even keep those war-toys in the field long enough.

The normal profits of a business concern in the United States are six, eight, ten, and sometimes twelve percent. But war-time profits — ah! that is another matter — twenty, sixty, one hundred, three hundred, and even eighteen hundred per cent — the sky is the limit. All that traffic will bear. Uncle Sam has the money. Let’s get it.

Of course, it isn’t put that crudely in war time. It is dressed into speeches about patriotism, love of country, and “we must all put our shoulders to the wheel,” but the profits jump and leap and skyrocket — and are safely pocketed. Let’s just take a few examples:

Take our friends the du Ponts, the powder people — didn’t one of them testify before a Senate committee recently that their powder won the war? Or saved the world for democracy? Or something? How did they do in the war? They were a patriotic corporation. Well, the average earnings of the du Ponts for the period 1910 to 1914 were $6,000,000 a year. It wasn’t much, but the du Ponts managed to get along on it. Now let’s look at their average yearly profit during the war years, 1914 to 1918. Fifty-eight million dollars a year profit we find! Nearly ten times that of normal times, and the profits of normal times were pretty good. An increase in profits of more than 950 per cent.
-Smedley Butler, “War is a Racket”

Much of what is going on appears to me to be similar to what was happening in Vietnam. “Oh everything is going great!” except it’s, you know, a lie.

The US hasn’t got any “boots on the ground” but there are, uh, howitzers on the ground. There’s at least a unit of army artillery, including 155mm Paladin self-propelled guns. The shit will completely impact the variable oscillator if ISIS decides to sneak a couple of those Kornets back behind the forward battle area, and shoot up an artillery park. It’s what the Vietcong would do.

I also have to wonder whether the Russians have had any hand in distributing some of those ATGM and the MANPADS that took down the Iraqi helicopters, back when Iraq had helicopters. It would be the kind of symmetrical payback for the US CIA feeding the mujahideen Stinger missiles to wreck the USSR’s operations in Afghanistan. It’s possible that once the situation resolves itself enough for the truth to come out, we’ll learn that “paybacks are a bitch” (I’m tempted to run that through Google translate into fake Russian  окупаемость являются суки probably means “the dogs they are paid for!”)

Quora Why is the Iraqi Army Losing Tanks So Easily?

(** The APCs are “uparmored” Humvees – an abominable kludge in which the US army, having decided it needed mobile next-generation jeeps, discovered that they were too vulnerable to small arms fire and turned them into really poor armored personnel carriers.  The US, having sold all its Vietnam-era M-119 armored personnel carriers, recognized that designing a new armored personnel carrier would take forever and result in something horrible like the Bradley, welds steel plates onto what is basically a GMC light truck. Because buying German-made Boxer 8x8s would be smart.)

The Kornet looks like it’s taking its time and bobbing around as it heads for the tank. It’s actually moving very fast but since it’s seen from the launch-point, it looks like it’s bobbing up and down and getting smaller. It looks like about a 4km shot. A tank crew that knew they were in combat would have had ample time to run the tank to cover, except it appears that the Iraqis were parked there asleep or something, perhaps they thought they looked intimidating.