Chiitaanibah Johnson of California State University, Sacramento says she was disenrolled from her U.S. History class for disagreeing with her professor over the existence of North American genocide.

There’s a bit more detail about how things happened in the classroom, which bear reading. What I find fascinating is that there is a historian would would consider what was done to the indigenous peoples to be anything but genocide.

To emphasize the heroism of Columbus and his successors as navigators and discoverers, and to de-emphasize their genocide, is not a technical necessity but an ideological choice. It serves- unwittingly-to justify what was done. My point is not that we must, in telling history, accuse, judge, condemn Columbus in absentia. It is too late for that; it would be a useless scholarly exercise in morality. But the easy acceptance of atrocities as a deplorable but necessary price to pay for progress (Hiroshima and Vietnam, to save Western civilization; Kronstadt and Hungary, to save socialism; nuclear proliferation, to save us all)-that is still with us. One reason these atrocities are still with us is that we have learned to bury them in a mass of other facts, as radioactive wastes are buried in containers in the earth. We have learned to give them exactly the same proportion of attention that teachers and writers often give them in the most respectable of classrooms and textbooks. This learned sense of moral proportion, coming from the apparent objectivity of the scholar, is accepted more easily than when it comes from politicians at press conferences. It is therefore more deadly.

Zinn’s observation, that it is an ideological choice is the crux of the issue. The professor, admittedly, has a limited amount of class-time to deal with any particular topic on the curriculum, but saying “You are derailing my class” misses the key point: it’s the students’ class.

Worse, the professor took it personally: “I don’t appreciate you making me sound like a racist and a bigot in my classroom.”

So, back to my theories of verbal aggression: it is impossible for someone to make someone else look in a particular way during an argument. The two opponents have only each others’ words to work with. Unless the exchange is entirely unilateral (in which case it’s not an argument!*) the only ammunition that can be fired at you is ammunition you gave your opponent.

In some arguments, one side or another will adopt a tactic of modifying their opponents’ words and throwing back the modified versions; the extreme form of this is the “straw man argument”  Most of us recognize straw man arguments as intellectually dishonest because they amount to attacking the other person for something they didn’t say, as if they had said it. So, if the student had taken the first couple words from the professor and fired back: “you are a bigot and a racist!” then that would be a form of distorting the professor’s argument and using the distorted version. The professor’s tactics were unbearably bad in this situation, he should never have said anything like that; he could have said something like: “history is about interpreting the past and contextualizing events to try to synthesize a narrative about what happened so we can understand in context. I can see how you interpret things that way and I’ll acknowledge that historians across the spectrum from Samuel Eliot Morison to Howard Zinn have called it genocide.”

By saying “I don’t appreciate you making me sound like a racist and a bigot in my classroom.” the professor left himself wide open for a stop-thrust:
“Well, now that you mention it. Yeah.”

If the professor had been a good strategist, he would have assigned the class to also read Howard Zinn’s “A People’s History of The United States” (recommended book!) and assigned a paper on the topic of whether the indigenous people had been subjected to genocide, or not.**

Now, briefly, a comment on whether what happened to the Indigenous Peoples was “genocide.” 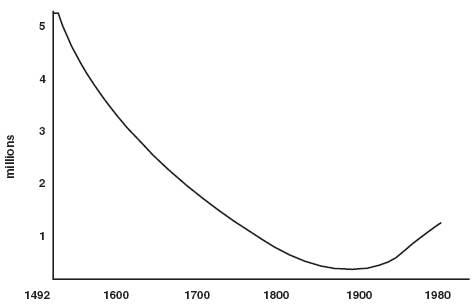 population of Indigenous Peoples in US (source) 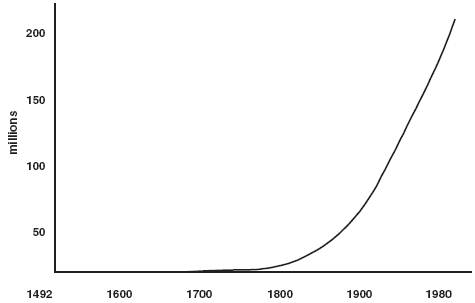 non-native population in US (source)

A few weeks ago I was talking with a friend about electoral politics and was trying to see what voting blocs could be assembled to disempower white males, or maybe all white people. Coincidentally the answer is: “none.” Though if everyone in the country who was not white aligned against the whites, and were able to peel off a percentage of the women voters, it could be done.

In the course of researching that I thought (naturally) (eventually) about the Indigenous Peoples and looked up the size of their population. And I was utterly gobsmacked because I hadn’t realized it was only something like 0.8% of the total population. That’s about the same as the population of Chinese, Filipinos or (asian)Indians.

(** That would be a ruthless strategy, but a good one. The other students would resent Chiitaanibah Johnson for making them “extra work”  but they also might learn some valuable history.)

One more meta-point: the UN Convention On Genocide of 1948 requires UN member nations to prevent and punish crimes of genocide. That’s why you saw the horrific, cowardly, response of the US to the genocide in Rwanda: “OH that’s not GENOCIDE that’s ETHNIC CLEANSING.” Perhaps Professor Notaracistbigot feels that, as an agent of the state, he shouldn’t acknowledge that genocide was committed. There’s a lot of that and the US’ fellow-travellers around the world, most notably racist bigoted genocidal state of Israel, tend to be mighty touchy when the word “genocide” is used in any case except when the nazis did it.

It is my opinion that any successful land-grabs in history tend to be genocidal; otherwise you’ve got this great big refugee problem and refugees cause political knock-on effects that require endless bombings and murders to suppress (and it doesn’t work).

…any of the following acts committed with intent to destroy, in whole or in part, a national, ethnical, racial or religious group, as such: