Bayle, more than once, in his dictionary upheld the pros and cons in his entry on Pericles – a hideous portrayal of democracy, particularly that of Athens. 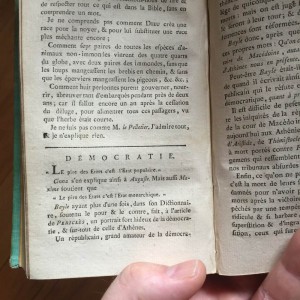 A republican and lover of democracy, who is one of our questioners sends us this refutation of Bayle and his apologia for Athens. We expose his reasoning. It is the privilege of one who writes, to judge the living and the dead: but we are judged ourselves by others, who will do likewise in turn and century after century every sentence is reformed.

That’s my edition. It goes on at length about Bayle’s apologia for Athenian democracy. Another edition which is translated online reads thus:

ORDINARILY there is no comparison between the crimes of the great who are always ambitious, and the crimes of the people who always want, and can want only liberty and equality. These two sentiments, Liberty and Equality, do not lead direct to calumny, rapine, assassination, poisoning, the devastation of one’s neighbours’ lands, etc.; but ambitious might and the mania for power plunge into all these crimes whatever be the time, whatever be the place.

Popular government is in itself, therefore, less iniquitous, less abominable than despotic power.

The great vice of democracy is certainly not tyranny and cruelty: there have been mountain-dwelling republicans, savage, ferocious; but it is not the republican spirit that made them so, it is nature.

Democracy seems suitable only to a very little country, and further it must be happily situated. Small though it be, it will make many mistakes, because it will be composed of men. Discord will reign there as in a monastery; but there will be no St. Bartholomew, no Irish massacres, no Sicilian vespers, no inquisition, no condemnation to the galleys for having taken some water from the sea without paying for it, unless one supposes this republic composed of devils in a corner of hell.

One questions every day whether a republican government is preferable to a king’s government? The dispute ends always by agreeing that to govern men is very difficult. The Jews had God Himself for master; see what has happened to them on that account: nearly always have they been beaten and slaves, and to-day do you not find that they cut a pretty figure?

A more recent critique of democracy is from PZ Myers, who writes:

The system is broken. It’s tainted and corrupt. Democracy itself is deeply flawed; it’s only as good as the electorate, and the electorate is a swine pit full of yahoos and holy rollers and used car salesmen.

That’s similar to part of Plato’s argument against democracy: the people are stupid, they’re a mob. The poor become the winners and the poor aren’t qualified to lead themselves. Plato was in favor of aristocracy – an aristocracy of philosophers, natch.*

Here’s the problem I’ve got with all this theorizing: even Athens wasn’t a democracy. It was ruled by about 12% of the population. Admittedly, that’s about 11% more than the US’ ruling class, but…

The US bears more resemblance to Geneva in the 16th century: there evolved layers of fake democratic “councils” each of which appeared to be the legislative body in which popular representation happened – but they were as significant as the typical high school class president: the real decisions were made by the “Little Council”  Nowadays we’d have the Koch Brothers, the Democratic party “superdelegates” etc – the whole vast machinery that exists to do nothing but obscure the fact that We, The People, have fuck all to do with how the country behaves – other than that most of us** pay taxes to keep the machinery of our own suppression running semi-smoothly.

The problem with PZ’s comment is that it amounts to victim-blaming: our democracy is fake, therefore the electorate are swine.

Let the blame lie where it should: our democracy is fake and always has been fake; it was a power-sharing arrangement between mutually distrusting oligarchs*** that allowed them to happily oligarch their lives away without interference from the monarch over in England.

Let the blame lie where it should: the world is full of these fake democracies – Turkey, China, Russia, the United States, where power is closely held by an elite “for the good of the people”  Don’t blame the people. The people are not swine, PZ. The people are horrified by what the Washington Establishment has been doing and some of them have snapped and are pushing for a 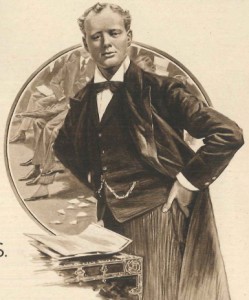 proto-fascist Trump and others snapped and were pushing for a pseudo-socialist Sanders. The entire election cycle has been an endless discussion of nothing but how the popular vote is being manipulated with money, mooted by party mechanics, and meanwhile the people aren’t swine – they’re frustrated and helpless.

Let me close with a suggestion: Don’t – just don’t – anyone quote Winston Churchill’s bullshit “Democracy is the worst form of government, except for all the others.” A born aristocrat, Churchill took advantage of the fact that he came out of a uterus belonging to the descendants of dukes of Marlborough and Spencer to launch his career into politics. Clearly, he was quite a believer in his own words.****

(** With the exception of Donald Trump and massive corporations)

(*** That, by the way, is exactly what Plato means when he talks about democracy being a degenerate form of oligarchy!)

(**** He also claimed there was nothing so invigorating as to be shot at and missed, but spent the London blitz in an underground bunker while an actor walked about pretending to be him. If you are getting the idea I am no fan of Churchill, you are perceptive.)