The media in the US are uncertain as to whether the US oligarchy is going to back Erdogan, or not. So their language is carefully pared-back, like their language regarding torture, or the imperial wars that the US has waged since 1990. They accept terms like “collateral damage”* and “enhanced interrogation” or “ethnic cleansing” instead of actionable terms like “area bombing” “torture” and “genocide” – the US is signatory to various treaties that criminalize “area bombing” so let’s just call it “unfortunate mis-identification” and the problem’s solved.

No “genocide” but “ethnic cleansing” means that the Convention on Genocide does not get invoked. No “boots on the ground” means not having to think about the War Powers Resolution. The media goes cheerfully along with the charade, like the cowardly lapdogs for authority that they are. If they called Genocide “Genocide” they’d be removing the fig-leaves our political leaders like to hide behind. If they called Erdogan “a dictator in all but name” or the US “an empire in all but name” then, you know, people might understand.

Consider this wording from a recent Reuters article on the Turkish coup attempt:

President Tayyip Erdogan tightened his grip on Turkey on Saturday, ordering the closure of thousands of private schools, charities and other institutions in his first decree since imposing a state of emergency after the failed military coup.

Got that? He “tightened his grip” because that’s so much nicer sounding than “launched massive purges.” Nowhere does the anonymous writer of the article pause to notice that surely “thousands of private schools, charities, and other institutions” were not part of the coup. If they had been, Erdogan would be in the barred waiting-room. I went to school with a few budding journalists, and I still remember their bleating cries of “we report the news, we don’t make it.” But when you downplay something outrageous, you’re also making the news – you’re making it more palatable.

Got that? He “also detained a nephew” – he didn’t “take a hostage” or “retaliate against the family of …”

Critics of Erdogan fear he is using the abortive coup to wage an indiscriminate crackdown on dissent.

Fuck my bleeding eyesockets, do you think? Here’s a hint, anonymous journalist: you’re not qualified to write about political news unless you recognize that political news gets “spun” and you speak clearly and honestly. Try this formulation:
Erdogan is using the abortive coup to settle scores, crackdown on dissent, and warn would-be dissenters.

The first decree signed by Erdogan authorizes the closure of 1,043 private schools, 1,229 charities and foundations, 19 trade unions, 15 universities and 35 medical institutions over suspected links to the Gulen movement

If they were all linked to the Gulen movement, Erdogan would not be in power right now.

Turkish authorities have suspended, detained or placed under investigation more than 60,000 soldiers, police, judges, teachers, civil servants and others in the past week.

60,000. Sixty Thousand. 60k. I suppose if your benchmark for “purge” is Stalin’s purge of the Kulaks, then that’s hardly a “purge” right?

“We are very surprised that our allies have not come to Turkey to visit even after one week has passed,” Omer Celik told reporters.

Hopefully, the US’ main concern right now is how to “visit” with a couple armed aircraft and escorts, and take possession of the b-61 nuclear bombs that are stored at Incirlik air force base. I’m afraid that the US is going to see this more as an opportunity to re-negotiate certain terms with Erdogan, in order for him to secure continuing US support, just like they propped up the horrific tin puppet dictator Musharraf after 9/11 – because bad allies that can be bought are better than no allies at all. 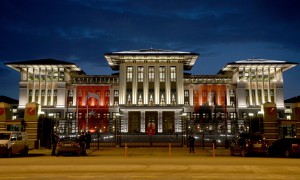 $7b buys a nice house

Look, when your “democratic” ally builds himself a palace approximatately the size of The Louvre or Versailles, they’re not concerned with the will of the people, anymore. Oligarchs gotta oligarch.

So, the EU looks to be losing England and may be gaining Erdogania.

(* That one dates from the Vietnam war, but you get the idea)