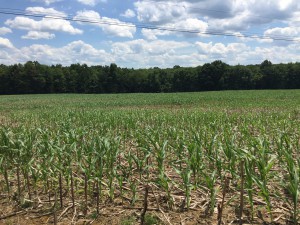 Looks like the little bastards have grown a couple inches. By the end of August they’ll be taller than I am, and any weeds growing between them won’t have a chance. 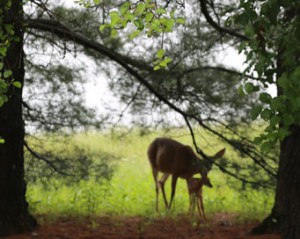 The deer are already hard at work, trying to eat the entire field.

2 years ago this mom deer had her baby in the treeline that shelters my house from the wind blowing across the fields (it’s a very traditional American farm layout c.a. 1805) and she was terribly thin so I put a bucket of corn and some carrots out for her. We often forget that in nature, a gestating animal is running a huge calorie deficit, and is one misstep away from death when they give birth. So I’m a soft touch and fed her, even though the next year she repaid me by eating my entire cilantro patch. “Thanks, Marcus! nom nom nom So much for your omlettes!”  She was back this year with a new baby, and two adolescents in tow. I’m not going to try to get any closer to her. I did almost drive over the baby with my truck; it was napping in the tall grass and I cut off the driveway to go chase down some ATVers. The baby screamed so loudly I freaked out and spent a while running around checking to make sure there was no corpse.

I buy my cilantro at the grocery store now, and shall forevermore.