We all have heard about H.B. 1523, which is a legislative fewmet that has been widely panned for doing what it’s obviously intended to do – allow people with “deeply held religious beliefs or moral convictions” to refuse service that violates those convictions. Widely interpreted as aimed at the LGBT, because it is, it then goes on to list agencies and services – DJs, adoption agencies, wedding cake makers, etc. that can be denied with impunity. That’s what most of us know, but there’s more… 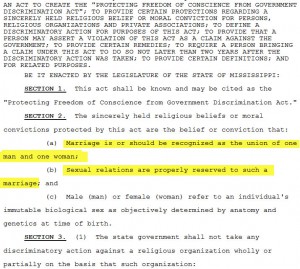 Yeah, they set it up so that someone can deny you service or employment or a cake for having sex out of wedlock. That’s, what, most of us? Sneaky christians.

I’d like to think H.B. 1523 has been pretty thoroughly beaten to death by now, and that it doesn’t really matter. The reason I’m pointing this out is because it’s a good idea to actually read legislation and not just take the press’ word for what it contains. Back when I was working on my book on homeland security I actually read the PATRIOT act and discovered there was a bunch of stuff in it that the press weren’t making a big deal about: like an aggressive tax-shelter for any rich asshole who wanted to name it after a CIA interrogator thug.* The press has a bad tendency to extract enough out of a piece of legislation to have a story, and then the rest of what they’re doing is just cutting and pasting from eachother.

I do think that the main story is that the legislation was a sidelong attack on LGBT people (aka: our friends, relatives, us) so I don’t blame the press for focusing on that main axis, but I do wonder how many of them actually read the text of the bill and did, you know, thinky stuff.

Sneaky christians didn’t just take a slap at LGBT, they took a little poke at those of us who enjoy our fornication now and again. That’s rather odd, since it means that anyone with sincerely held religious beliefs could deny services to lots of mega-church pastors, legislators and talk radio hosts I can think of.

(* I believe that provision got dropped out of the final bill; I was working on the early version. I’d like to imagine that pointing it out may have helped get it dropped, but who am I kidding? Oligarchy’s gotta oligarch, and they didn’t get to be oligarchs in order to have to worry about what some puny nerd thinks. How many divisions has Marcus got? None. Pff!)

Error Messages » « Lyrics to Die To