This recent bit of news had me asking myself some rather strange questions, once I accepted (arguendo) one of the hidden premises, namely ensoulment.

I’ll briefly define what I mean by “ensoulment” as the theory that there is some kind of eternal soul that attaches to a human at some point between when it’s a sperm/egg pair, and when it graduates from high school. I’ll also note that I have never seen any evidence that souls exist and are a thing, or any theory that might explain how a soul and a body supposedly interface. I have never seen a scientific theory of how souls might plausibly exist in our bodies, let alone how they might continue to persist once disembodied. Isn’t that odd? For something as important to them as eternal life, you’d think the faithful would be more curious about it. But, generally, if you start drilling into a religious person’s theory of ensoulment, they start to look uncomfortable and may mutter something about “energy” and look a you from under their eyebrows as they wish you’d shut up already.

Energy? OK, where on the electromagnetic spectrum is this energy, and why doesn’t it show up on exquisitely precise scientific instruments? Does an MRI disrupt it? How come no scientist has ever successfully measured anything that might be generously considered a soul? Of course, there’s brain activity but that’s just electrochemical reactions. Those stop when we die. What about a soul?

Again, I am not arguing for the existence of souls. I think it’s pretty obvious that there is no such thing as a soul. But there are a lot of religious people who have made tremendous economic investments and taken up some fairly extreme political positions based on this theory that humans have souls and souls have these unusual and ill-defined properties (and then they’re looking at you from under their eyebrows wishing you’d shut up, already). The whole debate about abortion is based on religious people presupposing that humans have souls. If you abort a fertilized egg, apparently, you are wrenching some soul from its incarnation and it’s now-disembodied soul is unhappy about that. Or something. Proponents of ensoulment sort of slide by that one, wishing you’d shut up already, but is their issue that abortion creates a whole lot of ghosts unnecessarily? Because if ensoulment happens when the sperm and egg combine (rather than in high school, as I think it does) then there must be ghosts created by every fertilized egg that does not implant properly. Imagine the density of ghosts at a fertility clinic! They must be piled 50 deep around the place, all jockeying for space. Or something. 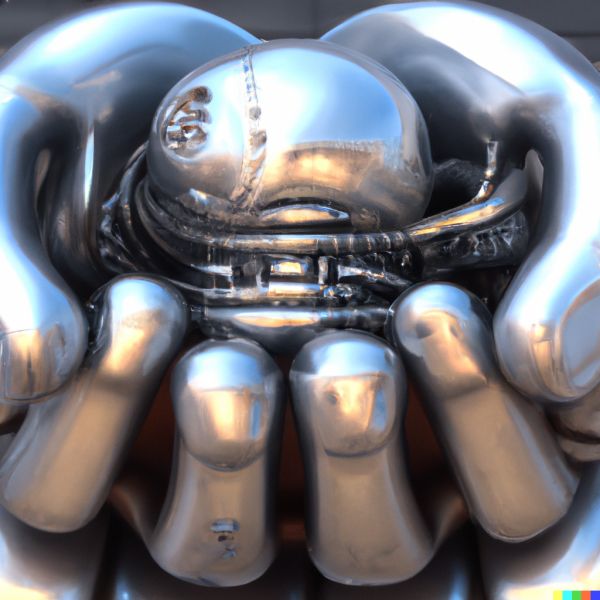 Dall-e2 and Marcus Ranum: “the soul is injected into the embryo by a great shining steel machine, in the style of H R Giger”

Now you can imagine my amusement when I saw this: [cnn]

In April 1992, Vanessa Williams’ “Save the Best for Last” topped the Billboard 100, Arkansas Gov. Bill Clinton was running for the White House, “Who’s the Boss?” aired its final episode, and the babies born to Rachel and Philip Ridgeway a couple of weeks ago were frozen as embryos.

Born on October 31, Lydia and Timothy Ridgeway were born from what may be the longest-frozen embryos to ever result in a live birth, according to the National Embryo Donation Center.

Wait just one freakin’ second. So, the embryos were frozen for 30 years but where did their souls go? If the theory of ensoulment we are operating under says that a soul is attached to the proto-human then what happens to your soul when the great big “pause button” comes in the form of a 30-year stint in liquid nitrogen? Never mind that the theory of ensoulment is incoherent to begin with, this is a bit of a problem. If the soul was affected by the liquid nitrogen it would have to be material, which brings in all of those questions like “why can’t you measure it?” If it’s not affected by the liquid nitrogen, then what was it doing for the last 30 years?

This is nothing new, of course: the previous record-holding frozen soul was 27 years old. I’m tempted to work in some kind of witty reference to Eldridge Cleaver’s Soul On Ice but, well, I just did that in the laziest possible manner. This has been going on for a while. Are the fertility centers surrounded 10 deep in screaming souls wrenched temporarily away from their bodies by the kiss of liquid nitrogen?

Naturally, my questions about ensoulment and the effect of liquid nitrogen on a soul are not sincere – I think the whole concept of souls is absurd. But rational people have been letting religious people get away with assuming we have souls and working backwards from there to establish public policy.

The Ridgeways, the proud parents of the frozen embryos, are religious nutbags:

“There is something mind-boggling about it,” Philip Ridgeway said as he and his wife cradled their newborns in their laps at their home outside Portland, Oregon. “I was 5 years old when God gave life to Lydia and Timothy, and he’s been preserving that life ever since.”

He’s right, there is something mind-boggling about it.

If one were to define the soul as “the totality of electrical activity and neuronal connections in a person’s brain” then I’d be comfortable with that, with the minor proviso that dementia sufferers’ souls are eroding, and that high school football should be banned because – after all – souls matter.

I also must add that I find that Plato’s explanation of immortal souls, which was forklifted into christianity by that great con-man saint Augustine, is a pagan idea which appears to have become a core christian belief.

Is there a religion that doesn’t have a notion of immortal souls? It seems to be an essential component of the big con.

They Keep Trying » « Dylan Being Dylan