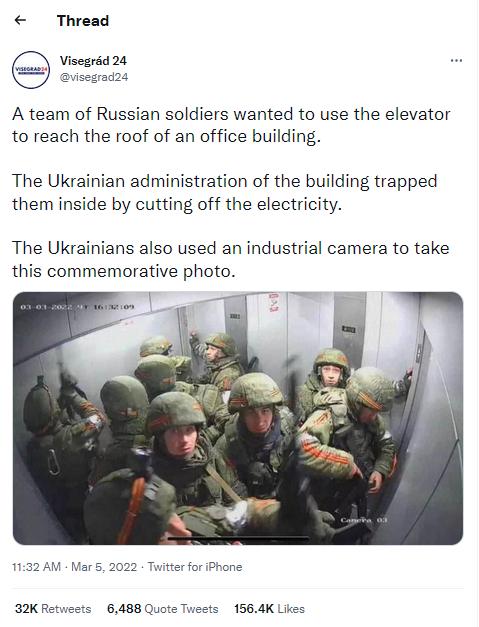 They all look so young. They’re just kids, for fuck’s sake.

One of the many great crimes of politicians / the system is that they prey upon the young, to get them to invest themselves heart and mind in militarism. There’s a whole superstructure of authority and propaganda that goes along with it, to make it work. It’s still a scam. It’s just a very big, very well-funded, vicious and violent scam.

The young guy in the far corner of the elevator has just realized that his leaders are not omnipotent. I’d like to hoist a glass in his honor, because that is a great moment of realizing “oh, shit, sarge is a fuckup.” I wonder if one of the squad suggested “maybe we should take the stairs?” Now, taking the stairs will become standard operating procedure.

This is a great case-study in insurgency warfare. As the insurgency gets worse and worse the invader has to worry about every single thing – which is still not enough because the insurgents are constantly innovating to take advantage of every possible line of attack. Turning off the elevator is brilliant. Throwing a smoke bomb into the shaft under the cab would be horrifying.

The kid in the back has probably never heard of Smedley Butler, but he’s learning that “War is a Racket”