We’ve got more discussion re: the martial arts to have, but this isn’t it. It’s related, though.

As reported in DailyKos [kos] Donald Trump now has a black belt in Tae Kwon Do. And not just any black belt – he’s 9 dan. 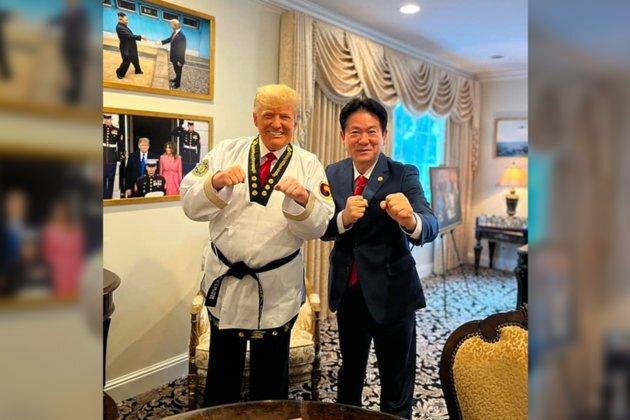 Basically, this is a version of the joke, “I have a black belt in Karate. No, really, it’s in my drawer of stuff along with my other martial arts gear.”

I love the tasteful way that the gold embroidery on the gi matches the eyebrows of the wanna-be dictator.

Issued by Kukkiwon president Lee Dong-sup, Trump received the honorary belt at his Mar-a-Lago resort in Palm Beach, Fla. Kukkiwon posted the exchange to its Facebook page, where Trump can be seen wearing a traditional taekwondo uniform,outfitted with a black dan belt.

This is not a joke: someone who owns an online degree-mill needs to give Trump an honorary doctorate in foreign relations and equine proctology. Back in 2002 I almost bought my horse, P-nut a doctorate in equine massage, but I decided that $500 was a lot of money to waste and he’d prefer a few carrots. But there is potential, here, for mocking stupid politicians by giving them stupid honorary degrees.

According to The New York Post, Trump isn’t the first world leader to receive an honorary ninth dan belt. Russian president Vladimir Putin also received the same honor when he visited South Korea in 2013. Neither leader is known to have personally practiced taekwondo.

My honorary dick is the biggest! I am vaguely reminded of Richard Gere versus Steven Seagal. If I recall how that went, Gere spent enough money at some shrine that they declared him a buddhist something-or-other [gere], and Seagal got declared:

a tulku, and specifically the reincarnation of Chungdrag Dorje, a 17th-century terton (treasure revealer) of the Nyingma, the oldest sect of Tibetan Buddhism

There’s an opportunity, here: someone can go around declaring different douchenozzle-wipes “reincarnations of Miyamoto Musashi” or whatever. I had a funny thing happen when I worked at TIS – we had a co-worker who someone convinced she was a reincarnation of some Egyptian princess; eventually the woman went to Egypt to the Valley Of Kings to re-connect with her past, and wound up sitting on the bus next to another delusional ageing white woman who was also the reincarnation of the same princess. That must have been a great conversation.

I’m contemptuous of these goobers (Trump and Putin) for not sending the taekwondo people packing and refusing such a dubious honor. I’m also contemptuous of Trump’s “I love me” decorating at his Mar A Lago office. Can Putin ante up with some pictures of his “I love me” wall? There’s a ‘wall gap’ forming.

So, seriously, 9 dan is a real rank in the martial arts. In kendo, for example, it is no longer awarded, though there were some great old masters who held the rank. But the whole thing is reminiscent of “honorary degrees” – what would an honorary degree in, say, Physics, mean? Do I get to publish my maunderings and not be laughed at? How is it that any institution granting honorary degrees is not laughed at? For that matter, how is an acredited university not de-acredited if they grant degrees simply for, for example, paying for an architectural nightmare of a dormitory? Does nobody laugh at Lee Dong-sup for giving out 9th dan black belts to floppy old hunks of blancmange like Trump? I imagine back in the Edo period, someone who ran a school that was a “belt mill” would have expected a stranger to walk in off the street and challenge the instructor.

Sword of Doom. Ryonosuke challenges the sensei who, rightly, tells him that he’s not qualified to just walk in and challenge without first demonstrating skill against the assistant instructor

[Admire the composition in that frame. It’s not a great movie, really, I’m sad to say but the camera-work and many of the scenes are incredibly well executed.]

Putin actually does know some judo, though I’d say that the only style of judo that has much value as a martial art is brazilian jiu-jitsu, which is not technically judo. Still, it appears that Putin can throw someone who comes at him with an utterly predictable attack, from a pre-arranged direction: 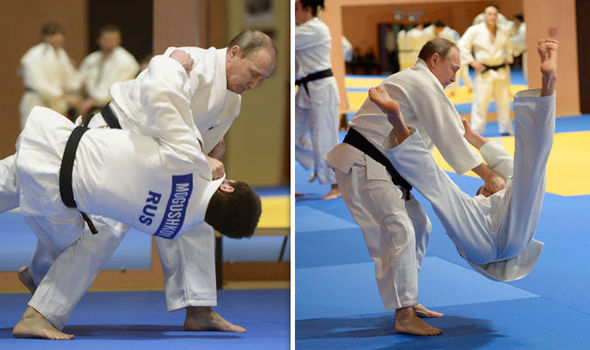 I’m pretty sure Seagal can still do that, too.

Let’s cut to the chase – what we really want to see is Trump versus Seagal in a cage match, and the winner has to fight Conor MacGregor. To make it fair, MacGregor has to fight with only one hand and both eyes closed.

No Consequences » « The War On Thanksgiving