As you know, I’m a gamer. My recent play-list includes Cyberpunk 2077 (what a disappointment: a mediocre game with too much Keanu Reeves in it) and Fallout 4 (in survival mode). Fallout’s survival mode is how the game should be played – it’s much more “realistic” if that makes any sense. But its ending was horrible and really pissed me off. I needed a decent gaming experience. Oh, and somewhere in there, Anna and I did a bit of co-operative Valheim, which was surprisingly fun.

Thanks Anna and Eric, both pushing me to try Subnautica. I’m glad I did. It’s a game with a lot of things to like. For one thing, it has been rock solid: no weird glitches or crashes; stability makes it possible to lose yourself in a game, whereas errors and crashes just make the game something to laugh about. (“Hey look at the stupid thing that happened in Fallout“) So, that is my first point: Subnautica is beautifully solid and has a solid consistency about it – the designs, sound, concepts, creatures, are all at the same level of quality, which is very high. Perhaps I’ve got the advantage of playing a game after it’s been released for 3 or whatever years, but that’s why I generally don’t try to play a game on its release (with the regrettable exceptions of Elite: Dangerous and Cyberpunk)

If Elite: Dangerous had some of the things that Subnautica has, the game would be really good. What do I mean? You can build your own 50-meter submarine, and gear it up the way you want (within the limits of space) into a mobile research/exploration station. Then, you can go deep into the depths and get stuck under a rock ledge and have to inch your way out by going outside, looking at the rocks and the top of the sub to figure out which way to go next – and don’t get me wrong: I was on the edge of my seat the whole time; I felt like Captain Nemo. I was having a blast. It’s little things like being able to name your ships, adjust the colors (“we all live in a yellow submarine!”) and the interior and walk around in it. If Frontier had put that, and multiplayer ship-walking, into Elite: Dangerous people would still be playing it 10 years from now. 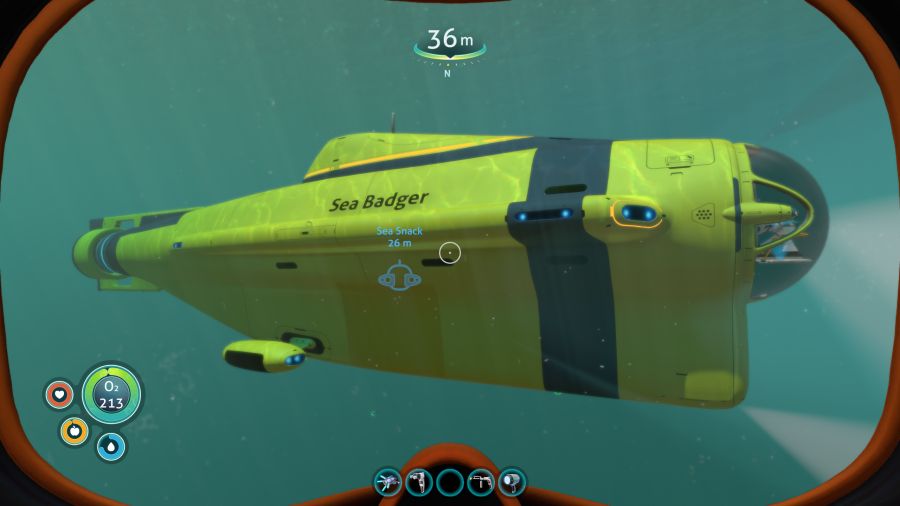 Of course there are no “sea badgers” (their cousins, the otters, have filled that niche quite beautifully) – I expect that if you put a badger in the sea, it would be very unhappy and miserable indeed. That seemed about right for Subnautica.

Another thing I love about the game is that the designs make sense. Or they try. It doesn’t just look like a sub, its amenities are about right, and you have to manage your battery life or you get to free-swim back to someplace where there is a charger. Let me give you an example of the finely-tuned gameplay in this masterpiece: you can’t put a battery charger in your sub because charging the batteries from your batteries works but just drains one battery into another and you lose quite a bit of juice in the process. You actually have to think about energy management. It’s not realistic but it’s part of a carefully-balanced system embedded in the game-play. There are a lot of “spoilers” on the interwebs and I don’t want to drop any, but let me tell you: if you screw up your energy management, you can do a lot of swimming. You can also come “home” to your base and discover that you screwed up its energy management and there is no breathable air in it because the scrubbers weren’t powered up. Fun! Especially if you were low on air and had just raced there to catch your breath… It’s unexpected excitement that makes much more sense than something like Fallout “Oh a deathclaw spawned behind you, now you are fighting for your life.” 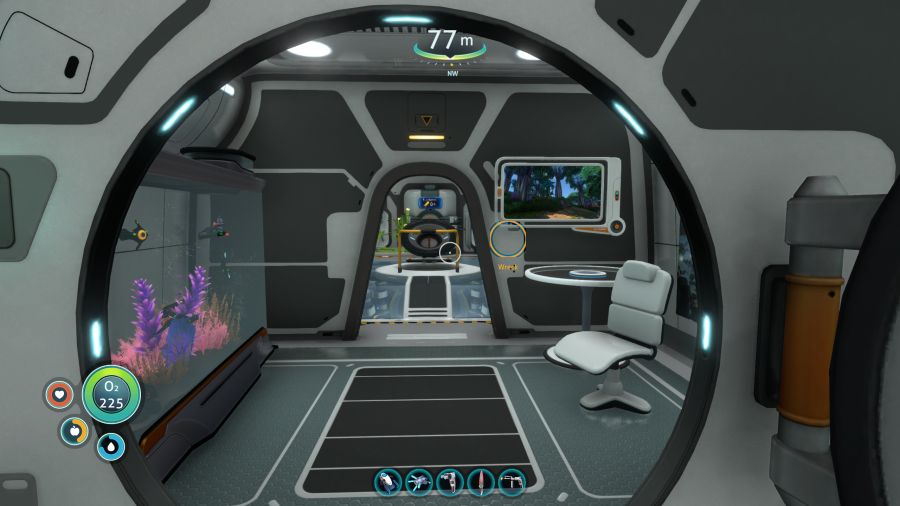 The interior of Sea Badger, kitted out by me as an exploration lab

In survival mode, you have to manage food, water, energy, space, and all the things – while not getting eaten by some of the big things that swim around down in the depths.

The map is amazing – the game’s designers really worked to build credible biomes and they realized something that only comes slowly to the player: when you’re playing in 3-space, a “small” area is humongous. It’s deliberately a bit hard to navigate at first, but eventually you get the hang of it and you get gear that helps. 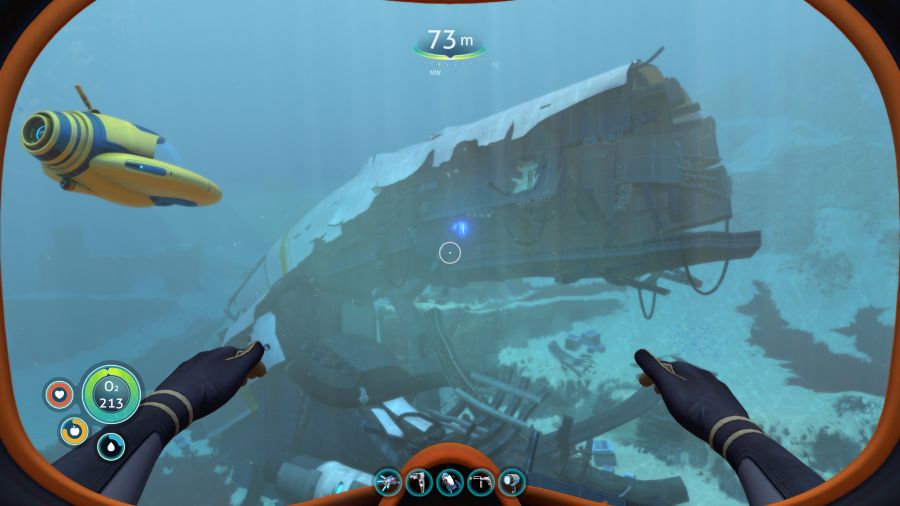 If you’re claustrophobic, this game is designed to mess with your head. A big part of the action is eeling your way into wrecks, to discover things about the stuff that has happened to you. That’s how you learn the digital designs for having your builder tool build you more better stuff. The whole time, you have a count-down for remaining air, and if you get disoriented inside that wreck, you don’t come out again. It’s fascinating: this game is stressful but the stress is fun, if you let it be. After all, it’s not as if you really drown, but – wow – you can get hung up in a piece of wreck and suddenly it’s real fear. The game’s ability to get me to suspend disbelief is that good.

One of the reasons the game works so well is the audio is perfect. For a game, it’s flawless. The music is great and ties to what’s going on around you. When you swim off the continental shelf and it drops down to pitch blackness below, the music starts welling up with some intimidating-sounding stuff that really makes you want to turn and swim back to someplace safe. But everything about the audio is great, including something all-important: the levels are consistent. If you’ve played Fallout or Cyberpunk you know what I mean; when the voice acting changes pitch and volume in mid-sentence it yanks you right out of the game instantly. Subnautica‘s audio is perfect (like Elite: Dangerous) 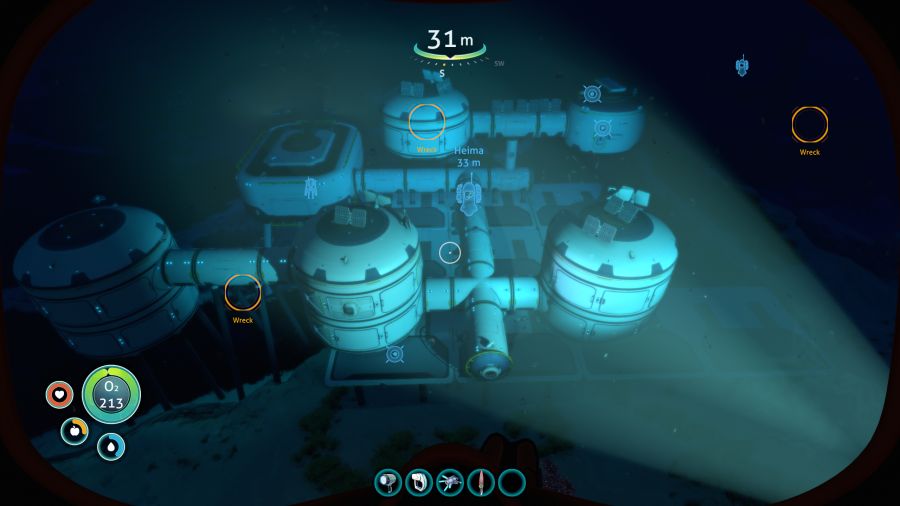 Similar to Valheim except more tied to some kind of underlying model of reality, Subnautica is mostly a game about exploration and building. You build and expand bases. They are whatever you want them to be, and figuring out how to manage energy for a base is an interesting problem. [I have a deep base that has a single vertical column 400 meters up to a general purpose room covered with solar panels] You really do feel like you’re coming “home” when you have 12 seconds of air left and are running for the hatch-entrance. I know it’s stupid but I have a real sense of accomplishment that my base is so freakin’ exactly what I want it to be. One mode in the game is you can play where all you do is just build, and there’s no need to feed yourself, etc. I like the challenge of needing a load of some particular material that requires a dive into a twisty cave-system, the timer running down, I’m dodging fish that want to sample me, and I have 10 seconds to grab stuff then I need to get back to my air supply or this whole attempt is a waste.

Everything is balanced beautifully. You can’t just go do stuff: you have to plan to do stuff. It’s logistics and adventure and more than a bit of fear.

I’ve only died 14 times so far. Some of my deaths were really awful. What a blast!

Military Glory, Monarchy-style » « An Idea I Won’t Be Doing