This is the state of the doors as of Tuesday night.

Since the doors are basically a stack of plywood pieces, I can support the latticework at the correct height by using the correct thicknesses of plywood pieces. The center of the latticework is butted together; there is no overlap to support or strengthen the glue joint. When I assemble the two sides together around the fiberglass, I am going to glue the lattice to the fiberglass with some West System G-flex epoxy (which seems to work pretty well) and then drill/screw through with small screws. That ought to do it. Then, I’ll paint over the screw-heads. 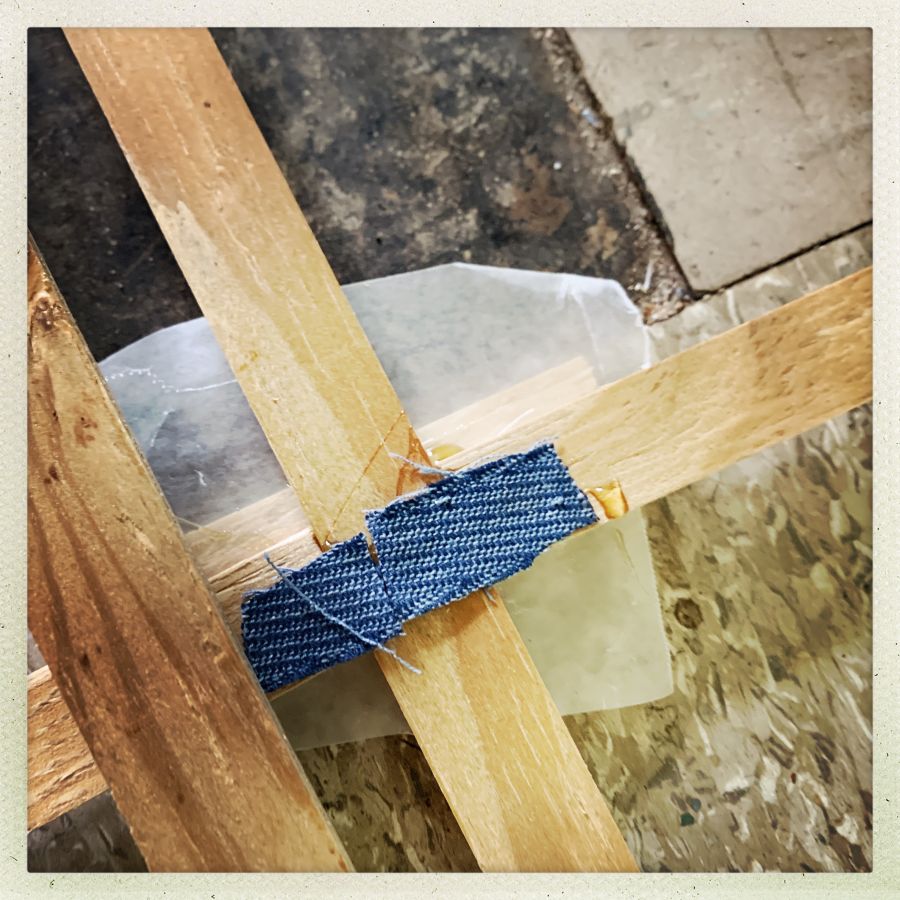 Where the joints are butted, I put a small piece of upholstery linen and some glue across the back. Since I’m using foaming urethane glue (“Gorilla glue”) it’ll fill the cracks and the fabric and bond together into a sort of composite. The linen trick also works super well with epoxy. I fixed my grandpa’s hammer, when I was a kid, by wrapping it with linen bookbinders’ tape and epoxy – he was having trouble gripping it and there were some splinters in the wood. You can actually manufacture objects by putting wax resist on a mandrel and wrapping with epoxy and cloth – basically the same technique used to make carbon fiber parts today (although those are vacuum formed, too). 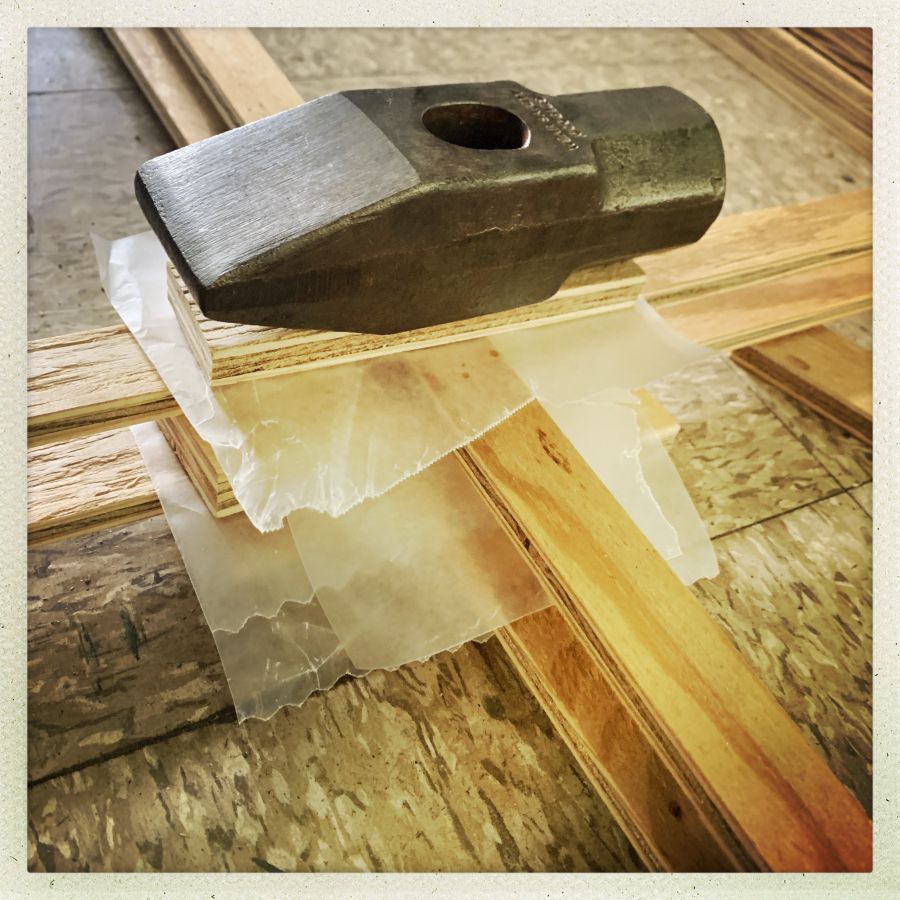 That part was a “pain in the ass” but the wax paper is important to keeping the various glue layers from merging into a single glue-mass, which would break everything when I pull it apart. A weight keeps the whole thing from shifting when the glue puffs up (and keeps the glue from puffing up). 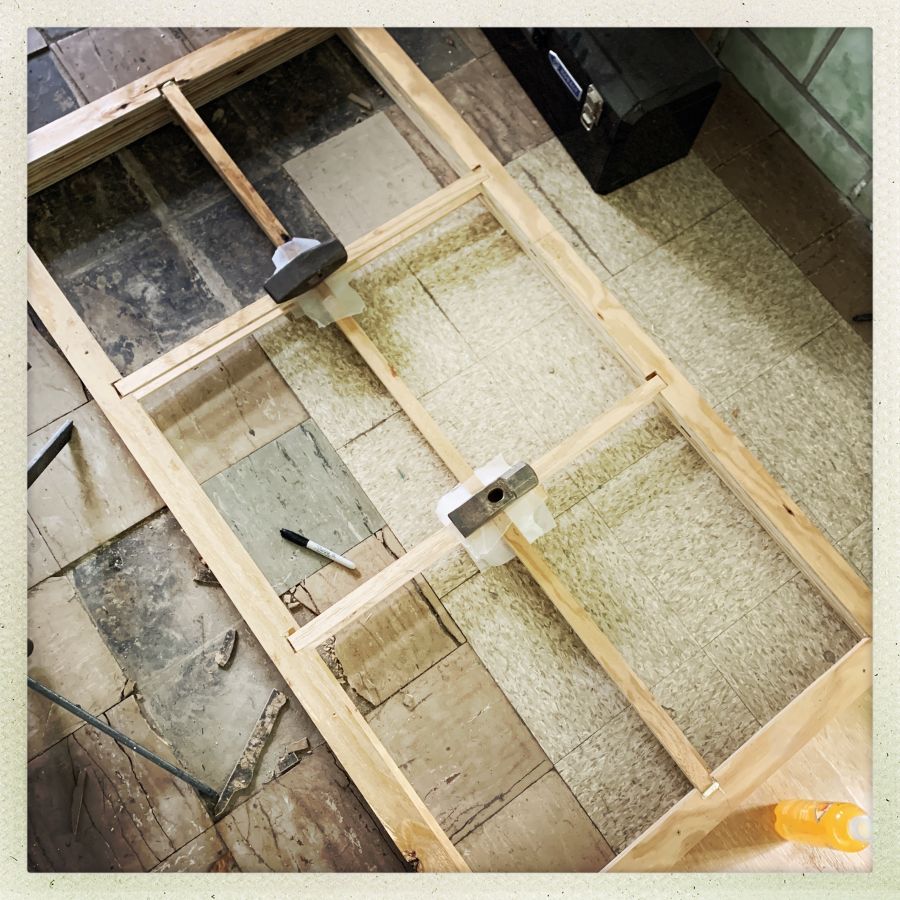 Now, you can see how the notched/layered design of the panels holds the latticework in place. Once the sides were cut, it was basically impossible to screw up the assembly. Well, not impossible – I’m an expert at screwing stuff up – but harder. The main thing is that it’s a lazy architecture. You put one piece of wood down, squirt glue on it, put the next one on top of it, aligned, and you wind up with an automatic lap/tenon at the corner. Bang a screw in that and do the next piece.

As usual, it’s moving slower than I wanted to, but the frameworks are done and that’s a big deal for me. The rest of the project is mechanical engineering: cutting the slide-rail and screwing the slides onto the bottoms of the doors, then tap-conning the slide-rail onto the concrete floor with some silicone caulk under it to keep the water from blowing under.

Oops, I forgot the paint. The next couple of days of work (today, saturday, sunday) are going to be putting a couple of coats of paint on the outside of each of these. I’ll probably paint the inner faces of the lattices to keep them from swelling with water. I am going to be really unhappy if these things fall apart from weather. I am still kicking myself for not just buying some commercial rolling glass porch doors and maybe putting some stickers on the inside. I’d have been done about 2 years ago.

Meanwhile, the fellows at the fabricator sent me some pictures of the new forge body in progress, so I could approve the arrangement of certain things. It looks like I am going to have the awesome forge. I’m not entirely looking forward to making the refractory linings but … someone’s got to do it; the cement won’t just mix itself if I glare at it hard.