When you start to track problems with the F-35, you may discover that the problems have problems and that there are whole other branches of problems that you haven’t heard of, yet. It certainly makes me wonder if, perhaps, the whole thing is made up of problems; it’s possible. As long as the taxpayers are footing the bill, who cares?

This problem enters my awareness because of an article declaring that the problem has been solved. Oh, that’s good. Wait, what?

Readiness improved thanks to new glue for the canopy? Doesn’t that imply that there was a problem with the old glue? Perhaps that’s when someone from the F-35 program would swan in and say, “it’s not the old glue; it’s the old old glue. We’re on our 10th iteration of old glues and finally, readiness is improving!” It sounds like a Monty Python cheese shop sketch, only vastly more expensive and less funny.

Newer A, B and C Variant aircraft are averaging greater than 60 percent mission capable rates, with some units consistently at or above 70 percent.

Notice how the word “newer” in that sentence conditions the entire sentence? It’s saying that, if you have one of the older F-35s, it’s a piece of shit and your solution is to buy a newer one. At which point, the aircraft may be flyable more than 60% of the time, which is perilously close to saying “it’s flyable more than half the time!” I don’t think you can fairly call a plane that’s flyable 60+% of the time a “hangar queen” it’s maybe “the fresh prince of hangars” or something edgy like that.

We still haven’t gotten to the problem.

Q1.) What are the problems with the cockpit transparencies?

A1.) The primary source of unserviceable canopies is transparency coating delamination. Delamination occurs when the surface coatings on the canopy separate from the base transparency. Though this condition occurs through normal use, several transparencies have delaminated unexpectedly after only a couple hundred flight hours of use. This issue does not impact the airworthiness of the canopy or aircraft.

I’m sure that the pilot can still see enough to operate the plane. Besides, pilots do instrument landings, etc. “Delamination” sounds so much nicer than “came unglued and peeled off.” Presumably, at high speed – or what passes for high speed in an F-35.

Recent findings suggest that the principle cause is a change to the sealant between the transparency and the aircraft frame introduced in 2015 as a cost saving measure, which can be corrected by reverting to the previously used sealant. Canopies are now being delivered with the correct sealant, and the number of early delaminations is expected to decrease as a result. The correction will be verified after modified canopies have been delivered to the fleet and achieved several hundred flight hours without delamination.

Wait, what?! There are “cost saving measures” applied to an F-35? So someone thought it would be OK to use a cheaper sealant and it turned out they were expensively wrong. By going back to the original glue, the program expects to re-achieve the original results which – reading between the lines – were still delaminations, but they were not “early” They weren’t scheduled delaminations or planned-for delaminations. At this point, once again, I hear the ghost of Richard Feynman saying “if the design does not say ‘the cockpit cover unexpectedly peels off in flight’ then the implementation is wrong and you’re applying ‘engineering fixes’ to a questionable design.” If the durability of the glue and the covering were understood at design-time, the designers would be able to predict a failure-rate. And you’d have to ask what kind of imbecile designed a jet fighter’s canopy to peel away in the first place. That seems like a more appropriate exercise to perform in maintenance. In a hangar. Where the F-35 belongs. 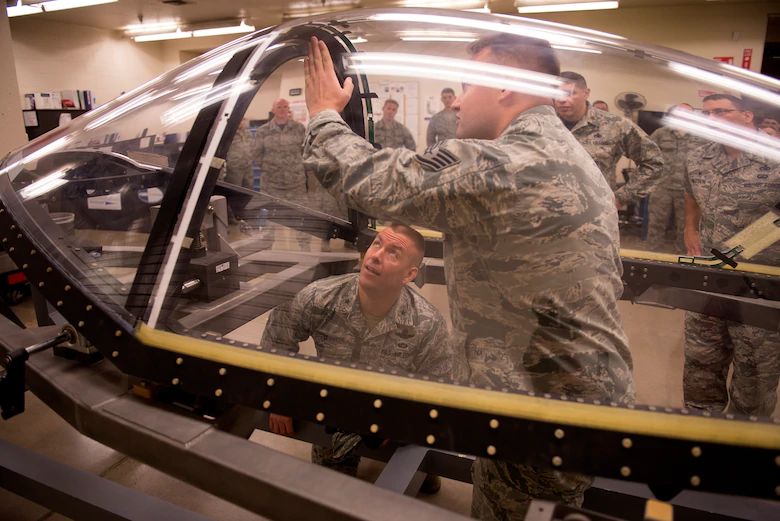 The solution is simple: have a pipeline of replacement canopies.

The program has qualified a second vendor, PPG, to provide the capability to repair damaged transparencies from the fleet and return them to supply for use as replacement canopies. This action to qualify a second source to repair damaged canopies will greatly improve spares availability and will have a positive effect on F-35 mission capability status.

To be fair, part of the problem is that combat jets have canopies designed so that the pilot can eject from the aircraft in the event that it experiences an unscheduled departure from sustained flight. [How did I do with my military-ese there?] The canopy includes a flexible linear shaped charge; a rubbery band of high explosive designed to separate the canopy from the plane without separating the pilot’s face from the pilot’s head. And you thought that your driver’s side air bags were a big deal? [luke af]

Over the past two months, Airmen from the 56th Component Maintenance Squadron’s Egress Systems Flight developed a new process for the replacement of flexible linear shaped charges on F-35 Lightning II canopies.

In an emergency situation when an F-35 pilot is required to eject, the FLSC is the component responsible for destroying and separating the canopy from the rest of the jet, giving the pilot’s seat a clear path to depart the aircraft.

To ensure the charges function correctly and safely, they are regularly replaced. Before February, the process to replace the charges took several teams of maintainers more than a week.

“The explosives we maintain have expiration dates and life limits, may receive damage over time, and may face other issues,” said Staff Sgt. Ryan Bessery, 56th CMS egress technician. “When we first started replacing them, it was a very long process. Our first one took ten days. We knew we needed to speed it up.”

I have to admit that I immediately wondered whether the canopy explosives are controlled by a central processor on the aircraft, because I read somewhere else that the F-35’s wireless access system has security issues. But that’s another problem. Let’s not think too hard about having a bunch of aircraft blow their canopies at inconvenient times.

Back in the early 00’s I worked with a successful entrepreneur (actually, the guy who wrote Norton Antivirus; Peter Norton did not) who owned a two-engine jet, a Piper Comanchee if I recall correctly. I got to fly in the copilot seat (woot!) and since we were flying out of a small airport, he invited us to bring firearms if we wanted to. But that’s another story. During the course of the trip we discussed jet aircraft maintenance and I learned that they are heinously expensive to maintain because of all of the parts that get stressed, vibrated, heated, exposed to dust and air. For example, a complete engine tear-down and rebuild needs to be performed every couple of years, and costs $250,000/engine. That’s not even close to F-35 territory, of course. When you’ve got things like canopy delaminations and stealth coatings and a single engine that is running at the extreme of its performance in order to make enough power to move the aircraft – “flight readiness” is Air Force lingo for “spending a whole lot of money.”

So, the stealth coating, the canopy delamination, those are the big drivers in readiness rates? Or does the aircraft also suffer from spontaneous disassembly or sudden and gratuitous total existence failure?

“a sudden and gratuitous total existence failure” is Douglas Adams, from The Starship Titanic. Since we’re on that topic, do any of you recall the story about the “OFFOG” and how it came apart due to gravitational stresses? [baen]