The sky above the port was the color of a television, tuned to a dead channel.

William Gibson’s lead-in to Neuromancer hooked me instantly; I read that book over and over; its cover is held on with cotton electric tape and the paper is browned and crumbly. It hasn’t held up well – neither the book, nor the idea of paper books has held up well. How many kids right now know what “the color of a television, tuned to a dead channel” looks like? [The echoes of the Big Bang] That was 1984. Blade Runner came out in 1982; my sweetheart – also named Rachel – and I saw it at the opening night in our local theater, where I had seen ALIEN 3 years before. The book and those movies established a dystopian aesthetic that has stuck with me ever since. There are people who see the future as the harmonious, clean, designs of Star Wars and there are people who see the future as wet and dimly-lit through fog, falling apart and kludged together. The opening scene of Blade Runner, coming in on hellscape Los Angeles, has always been the future I expected; I still do.

I’ve always felt that future noir dystopias are a counter-weight to optimism. “No,” they say, “there will not be a harmonious ‘United Federation of Planets’ in which there’s a Prime Directive.” Your prime directive is “I want more life, fucker.” I’ve always felt that the optimists were dangerously naive – and, I hate to say, global climate catastrophe seems to be coming down hard on the side of the pessimists. Not that it takes any ‘side’ other than “you’re screwed.” Or, as they said in Full Metal Jacket, we’re in a world of shit. 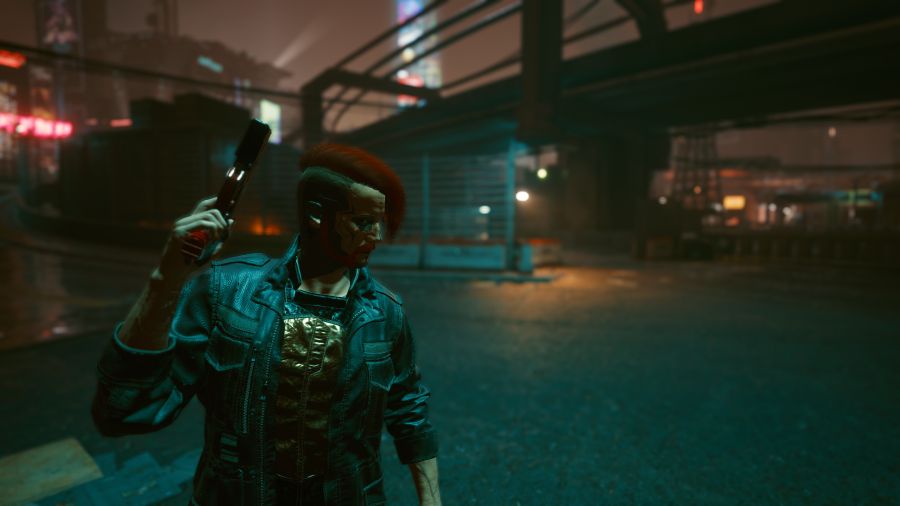 The big news in gaming right now is the (about time!) release of CD Projekt Red’s Cyberpunk 2077, which I downloaded on thursday, like a million and a half other gamers. Anna and I made a bunch of delicious enchiladas and spent a couple happy hours joking around with the character creation system, then tweaked graphic options until it ran passably on my gaming computer, then experimented with driving around Night City and howling with laughter at the horribly janky controls and their consequences. I must note with some pride that my first official action in Night City was to park my car on a cop, then to elude the cop’s surviving friends in a display of terrible driving. I used to be justifiably pleased with the elegance and precision of my flying in Elite: Dangerous and it was physically painful how bad the control model is in Cyberpunk.

Why will people in the future insist on driving cars in crowded cities? The dystopian future is stupid. Back in the mid-00s I used to sometimes teach in New York city, and one time (I missed a bus) I drove my big-wheeled Suburban into downtown and then tried to find a place to legally park a 9 foot tall truck. As far as futuristic dystopias go, I don’t think Cyberpunk‘s world is as bad as reality. Not even close.

In Cyberpunk‘s Night City you’ll maybe get some shots fired at you by a cop, but it’s nothing personal and it’s not even close to what today’s NYPD will do to you, just for fun. So I got to thinking about dystopian futures and what “Cyber Punk” really is, and the whole thing collapsed on me, leaving me standing bereft in a puddle of stupid. 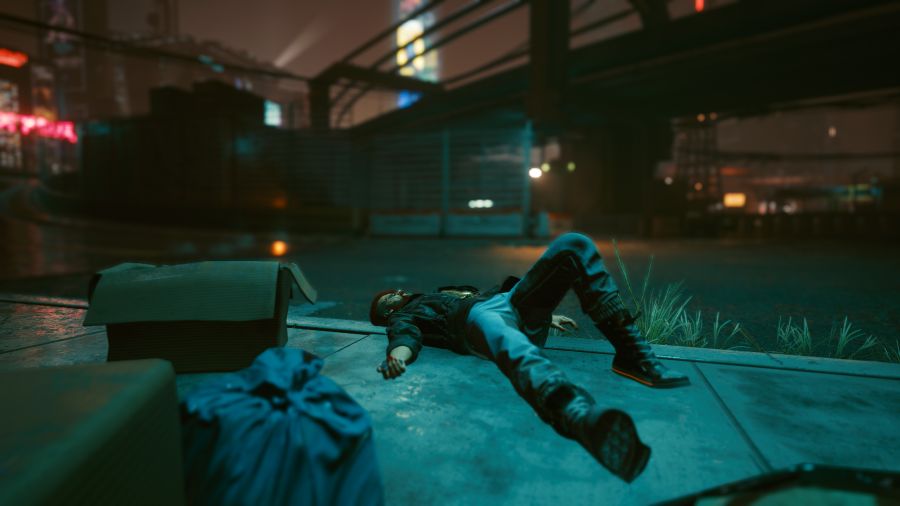 I should warn you: I was not highly impressed with “steam punk” either. I’ve got a system engineer’s perspective on things and it annoys me highly when someone adds gears to the side of a gun, and acts like that’s some kind of retro innovation. (Or calls a Barnett Commando crossbow a “laser bola” and has it shoot laser beams without requiring the prod to be cocked, WTF?) I know I sound like a crotchety old fart but I don’t think that there’s much that’s innovative, “cyber”, or punk about having terminal studs on your neck; wow, that’s … stupid.

I suppose that in the not-too-distant advanced technological future there will not be equipment manufacturers (Apple, I am looking at you!) that outdate their connector interfaces with incompatible versions every couple of years? It is not “punk” or cool or cost effective to walk around with adapter dongles shoved in your neck, and we all know that bandwidth specs will keep changing and software will keep bloating and the hacker of the future will walk around like the hacker of the present: towing a Pelican case full of wires, interface adapters, and dongles. There will never be a slick future in which all of this stuff just works great, because patch management will kill the whole thing – it’s “Double Dystopic” – a shittier reality than an imagined shitty future.

My wanderings were brief and I kept feeling that the whole game world was a stupid digital poseur. NPCs said “bad ass” things when you look at them too long, “HEY maaaan whatchu lookin’ at?” and then they’d say it over and over and over. We had a hispanic sidekick who talks like an updated Stepin Fetchitt and who appears to have a genetic predisposition for being a thug – was Donald Trump a cultural consultant on this piece of shit? The supposed “individuality” of the denizens of Night City, so far, reminds me a lot of the shopping mall goth kids who dressed off the racks at Hot Topic, showing their individuality by all looking uniquely the same. See my dystopian technicolor yawn?

Anna made a great point, when I complained that there appeared to be no non-violent, non-stereotyped response to some of the opening scenarios, “It’s a first person shooter. That means you gotta shoot stuff.” That’s hardly a dystopian future; that’s just “what humanity has been doing for a few thousand years” except the guns are unrealistic as hell. Seriously: if I could pack that much energy density into a gun, I’d throw the gun and call it “a bomb” [Lois McMaster Bujold, at least, gets this right in her Vorkosigan books] but for now I’m most dangerous behind the janky control-plane of my piece of shit car.

The key to happiness is low expectations [- Ray Wylie Hubbard] and I don’t expect anything that has to do with hacking, lockpicking, or pretty much anything technical to be well-represented in a computer game. At least Cyberpunk doesn’t have a lockpicking mini game where you have to position the torsion bar correctly to open a lock (hint: the torsion bar is hardly present and good lockpickers don’t need one) it appears that hacking in Cyberpunk is a matter of being able to mouse-click a bunch of patterns quickly using the janky game-pad controls. I now officially give up on the hope that some game about hacking will ever have a good cyberspace metaphor that encapsulates the challenge of exploiting a penetration into the unknown. So far the Cyberpunkest thing in the game is that people have facial piercings that don’t make sense, just like today and everyone’s clothes are ill-fitting and appear to be manufactured on the dirt cheap. That’s dystopian as hell in the Monty Python sense, “look! There goes the king!” – I’d expect someone rich and important to not look like they live in a gutter, but instead (so far) I got what I’m going to euphemistically call “broad cultural stereotypes” – a big fat black guy in a limo, wearing gold chains and talking like a badass is an important criminal? Oh, OK. Come on, guys, stretch your imagination and maybe treat us to a construct like in Ghost In The Shell that is dangerous in a way that is disconnected from its outward appearance. Just once, in one of these games, I want to see an apparent 9-year-old girl wipe out a squad of armored soldiers using a box of ramen noodles, a ganked Cisco wireless access point, and a pack of gum. That’s still a broad cultural stereotype but at least it’s not an offensively stupid one. I resolutely refuse to be intimidated by some NPC because they have a metal hand (I know a couple veterans with metal hands, so what?) and I don’t want to try to immerse myself in a world where the manicheanism can be summed up as “good guys wear black and bad guys are so badass they replace some of their natural body parts with carbon fiber.” As Harry Flashman said in Royal Flash [paraphrasing] “I’m not scared of that guy with the saber-scars on his face; I’m scared of the guy who gave him the scars.”

What I’m getting at is that if someone’s going to be intimidating in a game, they’ve got to work pretty hard to make that happen; just giving them some cool mods isn’t going to do it. If someone wants me to feel that I’m on a wild ride in a dystopian future, it can’t be a future that’s lagging behind the present, in terms of awfulness because then Night City is a substantial improvement on life in Sinaloa, Mexico right now.

I don’t hate this game enough to not play it, because eventually there will be a patch that smooths out the controls, and there will be sights to see and fun to be had. But I challenge the entire concept of “Cyber Punk”. It needs to be more than just “Common-Or-Garden Punk with funky facial tattoos” to support an interesting narrative. The Witcher 3, CD Projekt Red’s previous game, also has the usual flaws in a role-playing adventure game, but because it existed in a shallow background of the broad cultural stereotypes of a “swords and sorcery” genre, it made sense. This, does not. So much for immersion, I’m just gonna blow some shit up because I guess that’s all that’s punk about this brave new world.

Look at me monologuing like a fool, and I’m still parked on this cop. This is a first person shooter, I’ve got stuff to shoot. Bye! 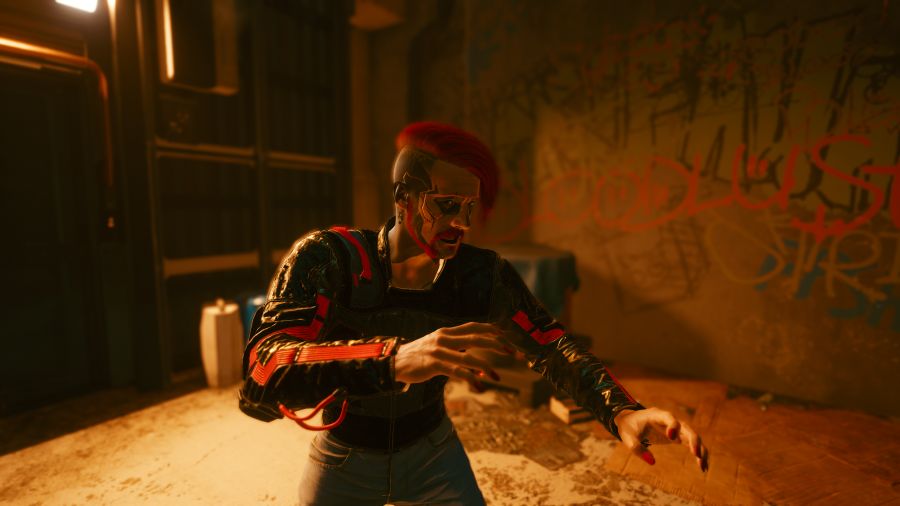 See what I mean about the steampunk aspects of the game? Why does my jacket have coolant channels that aren’t hooked up to anything? Where’s the radiator? Honestly, every damn thing in this game leaks or is partly broken, so why aren’t I leaking? Speaking of leaking, at one point last night I ran into a broad cultural stereotype of a woman who was pissing herself then trying to scoop the urine back up into a cup. Some art director thought that was a cool thing to have in the game, and told some programmer to make that happen, and that’s how that happened. That doesn’t say anything about Night City or its inhabitants, but it maybe says something about some art director. Maybe we need a new genre: “art directorpunk.”

Also: neon. Are you shitting me? That stuff would be crazy expensive. It’s already a domain of high art. Cyberpunk does not consist of resurrecting inefficient lighting marquees from the 1960s. I’d expect spam-storms that crash people’s brains from processor overload but … neon? This is hipsterpunk.

How Apropos » « Conversations With Dad