I think I am beginning to understand a thing: there are certain lathe accessories that are strictly “build your own” because making them for sale would be difficult (given machine compatibility) and legally dangerous. You’re not going to make any money selling a low-margin piece of tooling because your first customer who doesn’t read the directions and winds up with a chunk of resin sticking out of their forehead, well, there goes your promising career as a toolsmith.

I’ve mentioned vacuum chucks before, so let me give you a small view into the process as it stands for me right now. The head-stock of a lathe is pretty simple, in principle: it’s a threaded mandrel you attach a face-plate or chuck to, and there’s a pulley, a motor, and bearings. That’s basically it. For reasons of “it doesn’t need to be solid” the mandrels are historically hollow steel, 1″ threaded 8 threads-per-inch. That way, any face-plate you want (or a chuck or whatever) can go on it. The tailstock, typically, has a morse taper that usually holds a pointy thing (the “center”) or a ball-bearing’d pointy thing (an “active center”) that holds the other end of the work-piece while it spins. 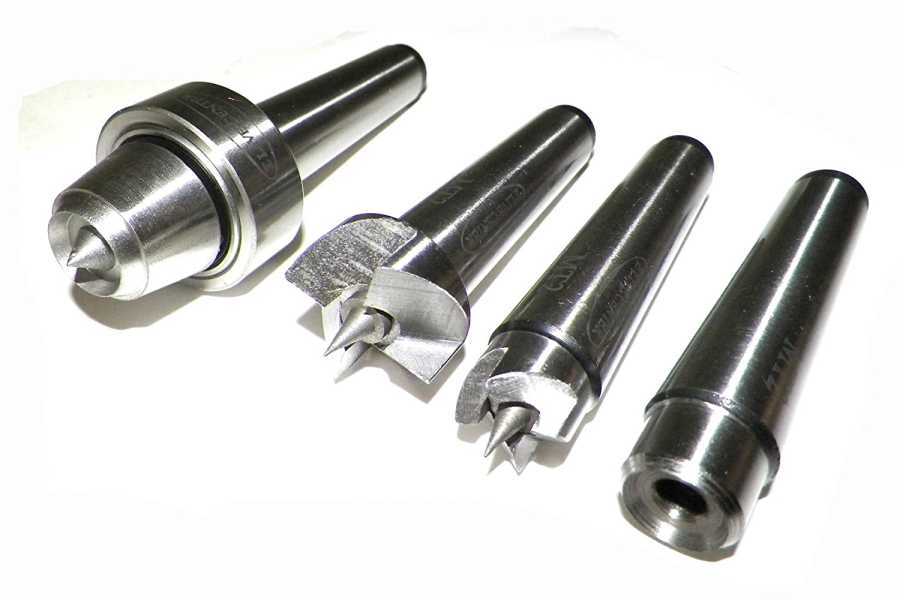 A morse taper is a very clever invention of machinists. Instead of having a shaft, what if you had a very slightly tapered shaft? Then, you could just put it in a very slightly tapered receptacle and give it a gentle tap with a mallet, and it’s going to stay there because of friction. But it’s easy to swap out and as long as everything you might want to install there has a standard taper, you can quick-swap things. In the collection above, the one on the right is threaded and has a collar you can mount a drill chuck on! It takes a second or less to swap a morse taper’d thing, so you can imagine easily putting anything on there that makes sense. For example, I often put a drill chuck with a great big forstner bit on it, and I can use my lathe as a very straight drill-way.

But here’s where it gets fun: there is a special kind of tailstock center, which is an “active” center (ball bearings) that has a short 1″ 8/tpi stud on the end. That way, you can have two chucks holding your work-piece: one is on the belt-driven mandrel in the head, the other spinning freely, but your work-piece is going nowhere as long as you remember to lock everything carefully.

Serious machinists learn how to make morse tapers in their sleep, because (until recently) most milling machines and other shop tools use some size morse taper or other. So if you have a metal lathe and know how to use it, you can cut a taper in a piece of tool steel and then manufacture whatever you want on the head, put it in your milling machine, and really mill stuff. I’m almost 60 years old, and I sigh a bit wistfully as I write that, because a serious machinist I will never be: you have to start that as a teen-ager and by the time you are 60 you’re a serious machinist. There’s not enough runway for Marcus and that’s OK: it’s an endless learning curve and you jump on where you jump on.

All of that is prep, to say that if I were a serious machinist, I’d make my own face-plates. I have a metal lathe and I could do it, but it’d take hours and they’re $19 on ebay, made by a serious machinist in China. [And please let me not get started about American attitudes toward Chinese manufacturing, which are exactly the same as 19th-century British attitudes toward American manufacturing until WWI was over] So, to make my ball-holder cups, I obtained two face-plates and then epoxied together a stack of cut plywood discs, then screwed them to the faceplate and mounted the faceplate, turned it even, and started smoothing it down. 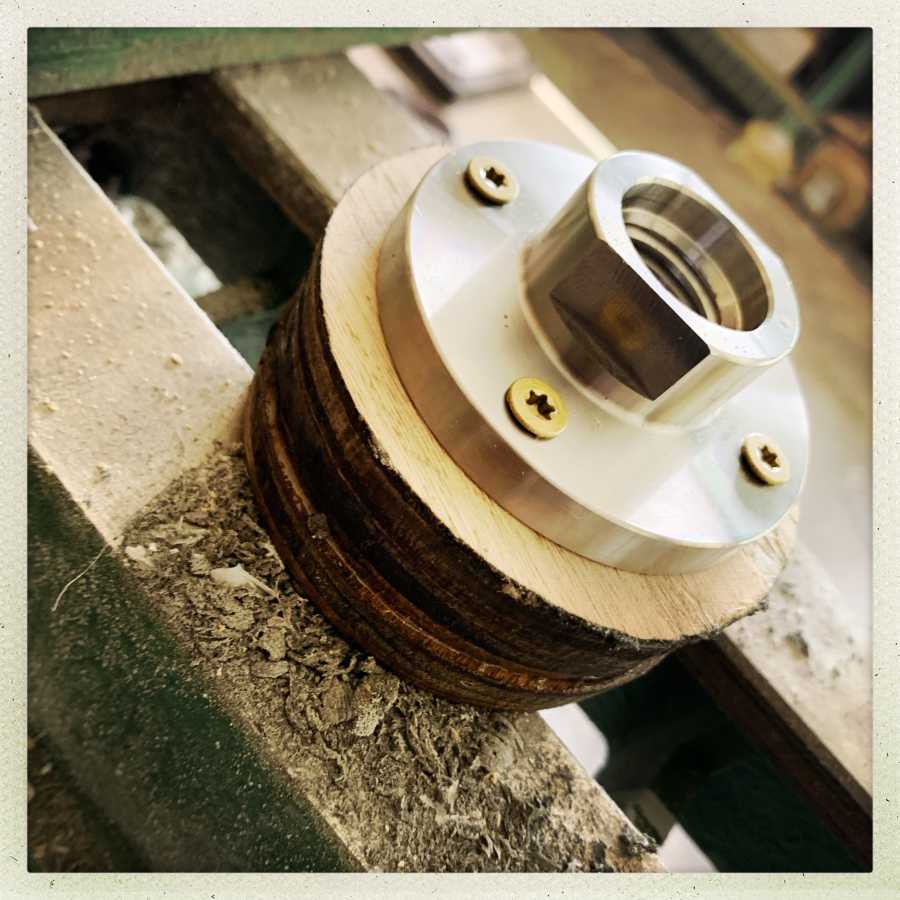 I love how serious machinists are, even when they are making something for a wood-worker. I went over the faceplate with a caliper and the measures between the two are accurate to 1/10,000 or so. You’ll notice the lovely chamfering between the plate and the socket – it was not necessary to do that, but that’s how machinists do things. The screw-holes are all counter-sunk so that the screws tend to locate themselves near the center of the hole; I am pretty sure that I could dis-mount my plywood and re-mount it and it’ll be pretty much in balance. 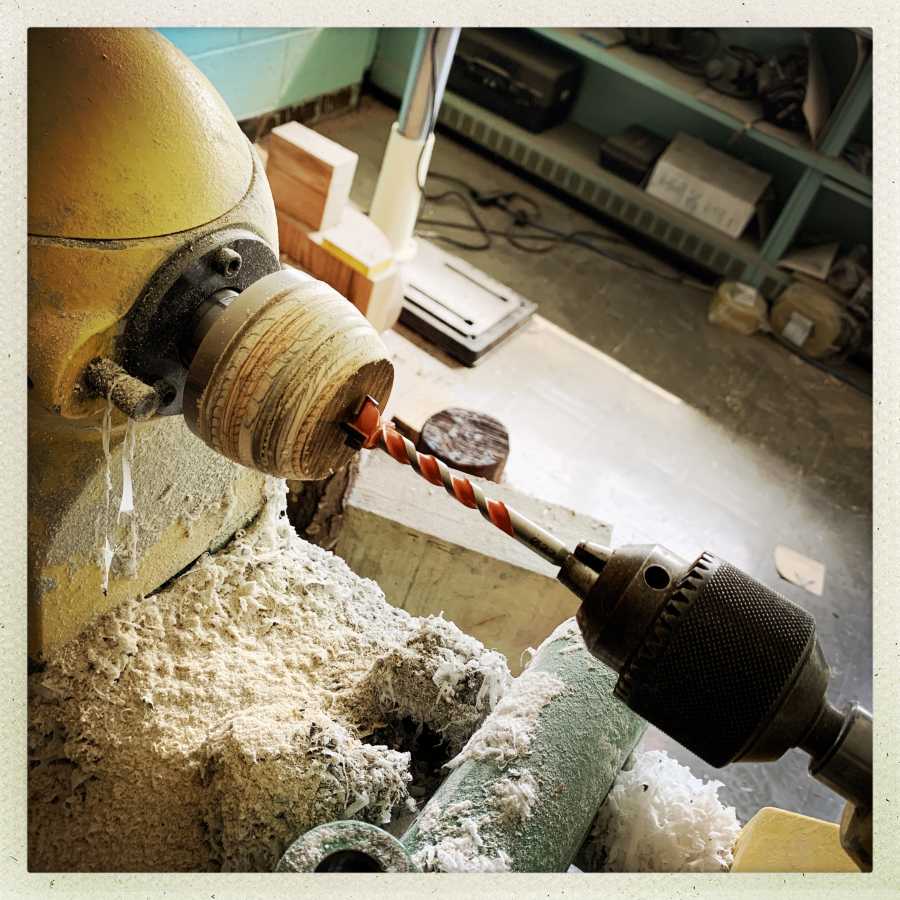 I don’t need anything in the tailstock, because my work-piece is my face-plate and it’s not going anywhere so long as I keep my chisels out of those titanium-coated high carbon steel screws that I used to hold the plywood on. That would get remarkably ugly. Always work carefully when you are near something that has metal in it; it could launch your chisel like the Spear of Longinus if it catches and the lathe is spinning fast.

Above, I have a chuck on a taper in the tailstock, with a forstner bit. My mission was to make a hole through the wood to the steel. I did that by measuring the thickness of the wood with a caliper and then cranking the tailstock out that much. Done! There was a tiny thin sheet of plywood at the end, later, which I pushed out with my thumb. (see, real machinists don’t work with materials you can just push around with your thumb, so their cut has to be 1/1000″ more precise than mine was. I was just happy I didn’t grind the forstner bit into the metal of the faceplate. 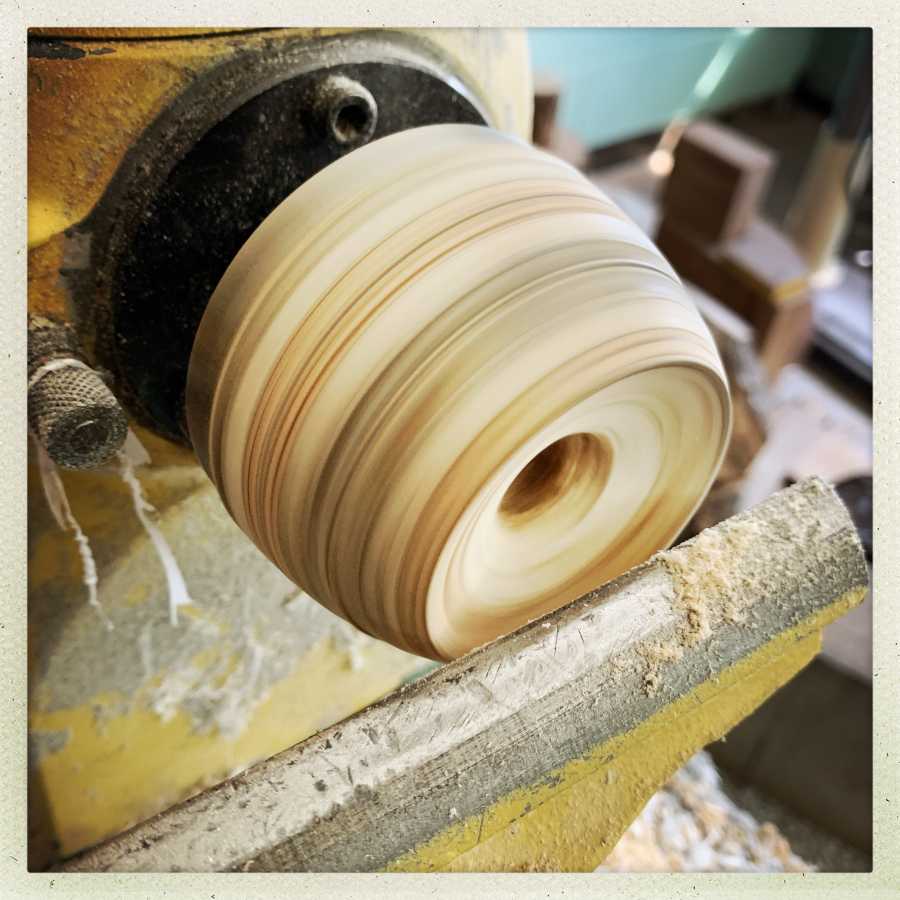 Then I made a curved surface in the face of the plywood, and sanded/polished the whole thing, and started sealing the wood with a couple coats of tru-oil. 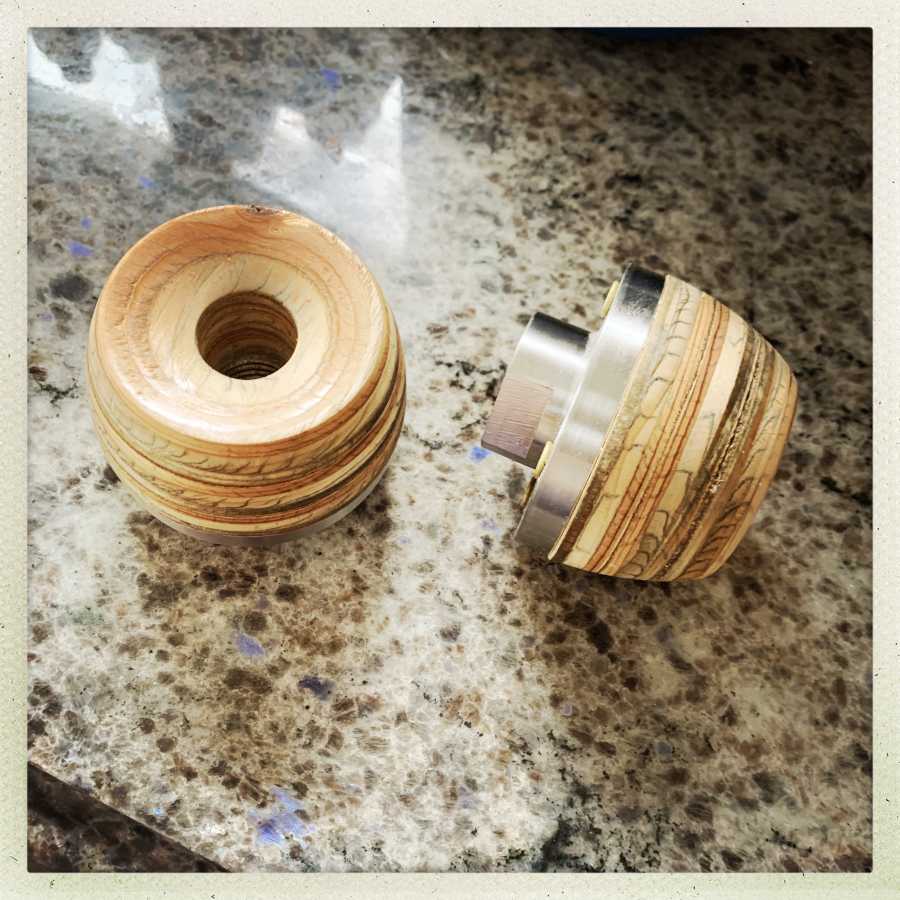 In principle, I have two things I can clamp a ball between. The curvature isn’t going to mate perfectly, of course, but I can put some double-stick tape in there and it’ll be good enough. Then, I can turn things into a round shape by simply clamping and re-clamping my work-piece and making it round from a couple of angles.

But, wait, there’s more! You can see that I made the hole clear through to the metal faceplate. So, what you do (I almost have this all rigged, I just need some hose connectors and patience) is run a threaded pipe through the mandrel of your headstock, with a nut on one end that locks against the inside of the hole (with a rubber gasket) – on the other end, you have another nut, and what’s called a “mechanical coupler” – a mechanical coupler is a doo-dad that provides a leak-proof rotating connection – think: how does the propeller of a boat get out through the hull and still be able to turn? They’re one of the wonders of the world created by serious machinists: a couple of plates that are in such close contact that air won’t slither between them, but that can still turn against eachother; I believe that is accomplished with a thin film of oil to keep the air out. Magic! Anyhow, when you have the coupler on the other end of the mandrel, the mandrel can turn but the other end of the coupler doesn’t have to. To that, you attach a hose and attach that to a vacuum pump. Then you put your object up against the cupped end of the holder, engage the vacuum, and it sticks there like it’s glued there. Until you disengage the vacuum and it falls off. So, I’m building a pair of ball cups where one will provide drive (because it’s on the mandrel) and grip (because the mandrel has a strong vacuum through it).

That’s a typical vacuum chuck. Because I hate the idea of being working on the lathe, and having a power blip, which launches a ball of resin at my face spinning 2,000rpm, I’m going to spend $150 for a uninterruptable power supply that I can use to condition the power to the vacuum pump. The UPS will have to keep the vaccum pump running for the (approximate) 10 seconds it takes for the lathe to spin down. I am not aware of other vacuum chucks that incorporate a UPS but it sure seems like relatively inexpensive insurance.

Maybe this week I’ll be able to fire it all up. I just need the brass fittings and some quick disconnect fittings for the vacuum pump, and a larger outlet box to power the UPS, and stuff like that. It’s very close to complete.

Before I start using them, I am going to make a silicone mold of the plywood part (which means taking it off the faceplate) so I can cast new cups out of polyurethane rubber, that will grip balls a bit better since they’ll have slight “give” to them. I’m going to use some shore-90 rubber and I’ll cut some discs out of fiberglass window screen to put in the molds to make them more dimensionally stable at the base.

Then I’ll be ready to turn some resin eggs and bowls! I may as well make it as safe and easy on myself as I can.

Unrelated, I have been doing a bunch of prep-work for some turnings. That’s ungratifying and not visually interesting work. It’s also kind of stressful, because it entails gambling largeish amounts of resin, which is not inexpensive. As the size of your work-piece goes up, the cost in resin goes up (dramatically) and the likelihood there will be flaws and bubbles goes up, too. 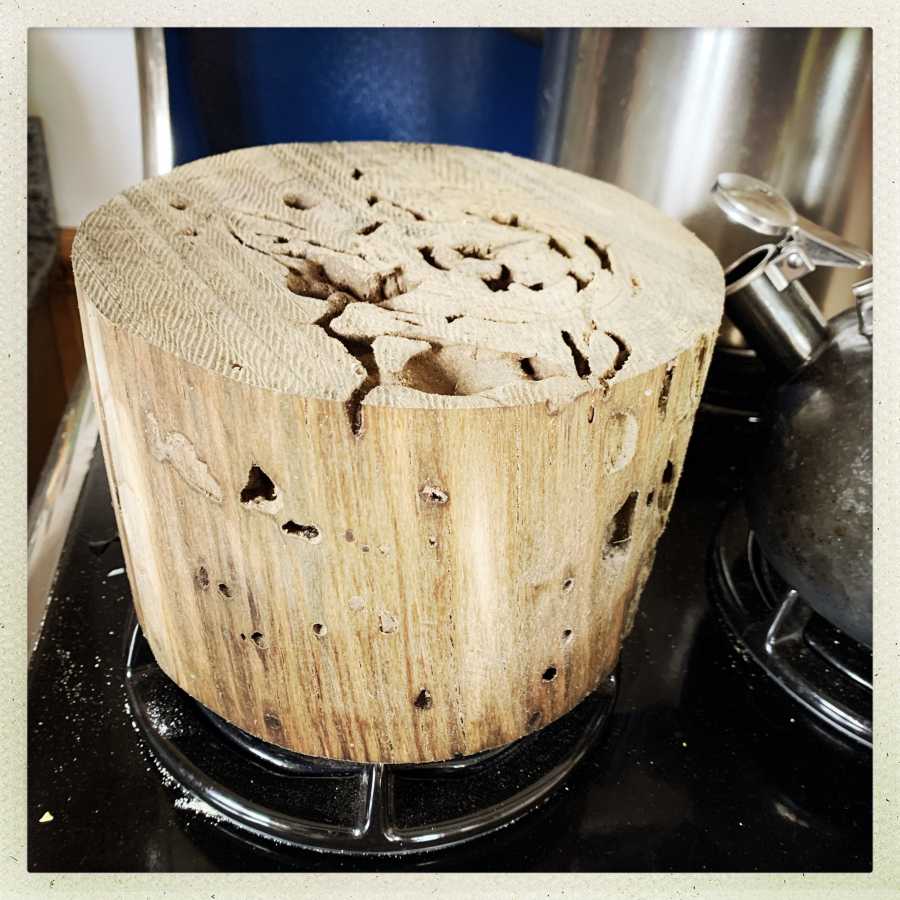 I believe it is ash wood(?) I’m not sure. But, when I got it, it was home to a hive of ants. I found that out when the bandsaw was halfway through and the upset ants came boiling out to discuss it with me. I left it outside for a few days so they could decamp peacefully, then trimmed it up and soaked it in light resin, cooked it, and dried it. Now, the wood should be pretty strong and have less air in it. My plan is to put that in a bucket (it fits perfectly) and fill it with clear resin. Then, if I can turn it into a bowl, it’ll look like ant farm, maybe. Or maybe it’ll look like bowl. We’ll see.

Then, there is Son of Broken Oak: 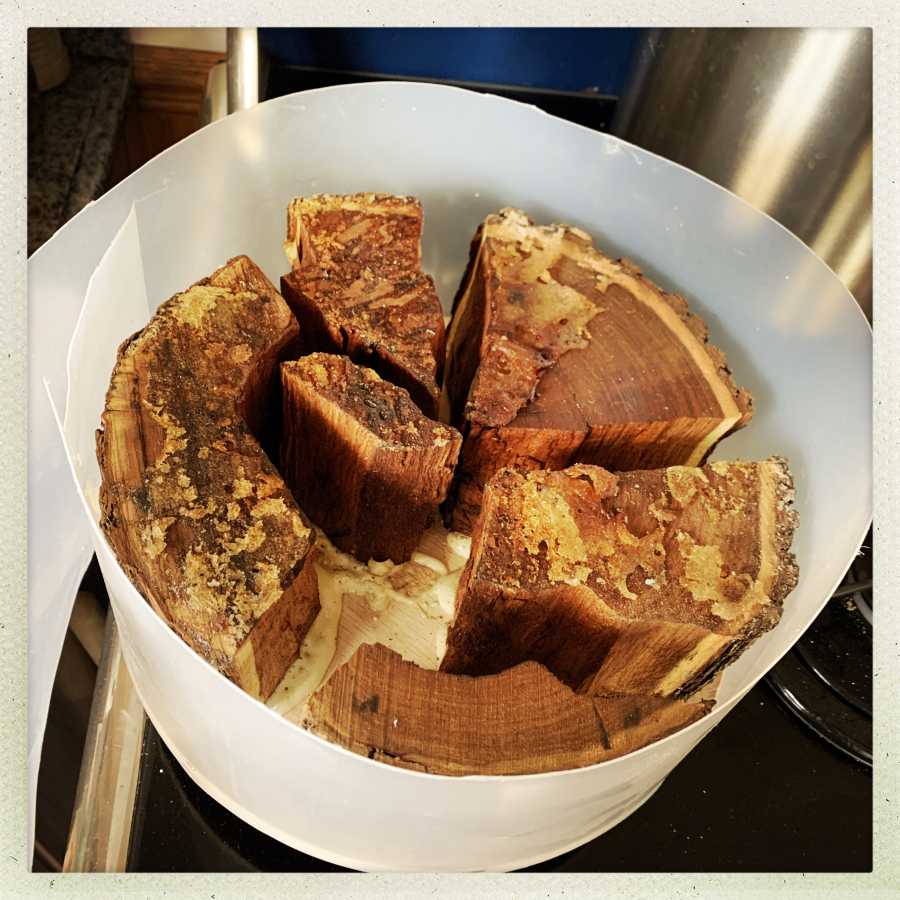 This time I individually pressure-soaked each piece in resin before I glued it to the plywood base. All I need to do now is finish taping up the polypropylene sheet collar around it, and pour in about a gallon of resin. Woof. That’s about $100 worth of resin right there so I do not want this to screw up. Nor do I want it to leak. That’s why I keep picking it up, looking at it, and saying, “maybe later.”

By the way: isn’t plywood surprisingly lovely? Eventually I’ll stack some up and make a bowl.

The TikTok Affair » « How To Riot