When the IPCC talks about catastrophic extinctions if there is a rise of more than 6C worldwide, they’re talking about the long-term average temperatures getting pushed up that high. Short-term spikes are expected, too.

The temperature in Verkhoyansk, about 4,660 kilometres northeast of Moscow, hit 38 degrees Celsius on Saturday, according to Russia-based meteorological website Pogoda i Klimat.

For those of you who use freedomheit, that’s 100F. Back when I was a kid growing up in Baltimore, Maryland, that was a “heat wave” but now it’s just another summer. But 100F in the arctic circle is something else, entirely. 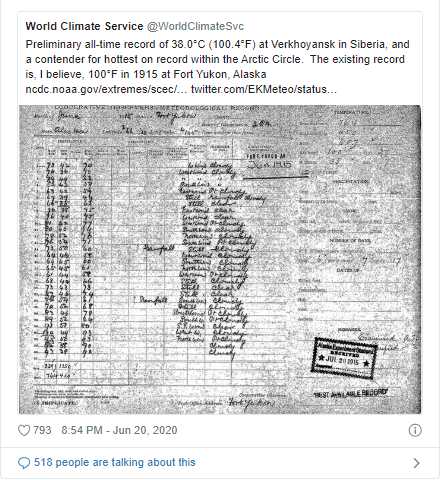 The arctic is warming at more than twice the rate of the rest of the globe, because it’s cold – or it was – so the thermal gradient is sharper.

Crop failures, fisheries collapse, wildfires in Siberia, anoxic dead zones in the oceans – we’re right in the middle of a calamity and it’s happening like the death of a thousand cuts, except we’re drunk on oil and don’t feel it.